Remember “Swine Flu”? Looks like it was a scam indeed

I guess now that it’s the dead of winter, the time when people can really get sick, the “Swine Flu” panic is a thing of the past.

We have many more things to panic about now, right?   I mean, we’ve got the official CNN 24/7 “terrorgasm”, we’ve got coffers to bill at Big Corporations who can Supply Things To Us That Will Keep Us Safe.

And considering that there was a case of a suicide bomber somewhere (Afghanistan?) hiding the bomb up his rectum, Colbert’s suggestion that all Muslim men have a colonoscopy before boarding an aircraft doesn’t seem like something that would be far-fetched in today’s world.

You’ll never see this on our 24-hour terror programs, but for some reason the European Parliament has decided to investigate this scam:


The Council of Europe member states will launch an inquiry in January 2010 on the influence of the pharmaceutical companies on the global swine flu campaign, focusing especially on extent of the pharma’s industry’s influence on WHO. The Health Committee of the EU Parliament has unanimously passed a resolution calling for the inquiry. The step is a long-overdue move to public transparency of a “Golden Triangle” of drug corruption between WHO, the pharma industry and academic scientists that has permanently damaged the lives of millions and even caused death.

The parliament motion was introduced by Dr. Wolfgang Wodarg, former SPD Member of the German Bundestag and now chairman of the Health Committee of PACE (Parliamentary Assembly of the Council  of Europe). Wodarg is a medical doctor and epidemiologist, a specialist in lung disease and environmental medicine, who considers the current “pandemic” Swine Flu campaign of the WHO to be “one of the greatest medicine scandals of the Century.”[1]

The text of the resolution just passed by a sufficient number in the Council of Europe Parliament says among other things, “In order to promote their patented drugs and vaccines against flu, pharmaceutical companies influenced scientists and official agencies, responsible for public health standards to alarm governments worldwide and make them squander tight health resources for inefficient vaccine strategies and needlessly expose millions of healthy people to the risk of an unknown amount of side-effects of insufficiently tested vaccines. The “bird-flu”-campaign (2005/06) combined with the “swine-flu”-campaign seem to have caused a great deal of damage not only to some vaccinated patients and to public health-budgets, but to the credibility and accountability of important international health-agencies.”[2]

The Parliamentary inquiry will look into the issue of „falsified pandemic” that was declared by WHO in June 2009 on the advice of its group of academic experts, SAGE, many of whose members have been documented to have intense financial ties to the same pharmaceutical giants such as GlaxoSmithKline, Roche, Novartis, who benefit from the production of drugs and untested H1N1 vaccines. They will investigate the influence of the pharma industry in creation of a worldwide campaign against the so-called H5N1 “Avian Flu”  and H1N1 Swine Flu. The inquiry will be given “urgent” priority in the general assembly of the parliament.

In his official statement to the Committee, Wodarg criticized the influence of the pharma industry on scientists and officials of WHO, stating that it has led to the situation where “unnecessarily millions of healthy people are exposed to the risk of poorly tested vaccines,” and that, for a flu strain that is “vastly less harmful” than all previous flu epidemics.

There you have it, in plain English.

What everybody knew, who was paying attention.  Of course NOW they decide to do this, NOW, after the pharmaceutical companies have sold all the vaccines they could, I mean, if you haven’t gotten a vaccine by now, you’re probably not gonna get one, right?

This reeks of the “I am shocked, shocked, that gambling is going on here” line from Casablanca (and forgive me if i’m not quoting it correctly).

I mean, the EU sure wouldn’t want to actually infringe on a corporation’s god-given natural rights to scam the public into making money?    But to keep a little legitimacy in the public eye, they’ll sure pretend to investigate it afterwards, probably to slap a few fines on the perps so they can share the wealth, you know?

I was saying it back when they fear was being ramped up to fever pitch (excuse the pun) over this bogus flu.   That the WHO must have been corrupted.   Because it was, well, just obvious as fuck (pardon the language)..

The world is completely corrupt.  You can’t believe anything any more.

But the public keeps getting punked.    It seems every year the public is ever-more-easy to punk.

“If you choose not to get vaccinated then you pose no risk to those who are, after all they are protected, right.”

Next up.  Open any magazine.  Tally up the total pages then flip through again counting ads related to drugs.  In addition to the ad for the drug there are the legalese disclaimers of drug side effects and contra-indications specific to that drug in number two font.  When you get your flu shot you were of course presented with these disclaimers, contra-indications and or a list of ingredients in your personal shot, right?

I can remember when the Coast Guard was thought of as the fire department of the sea, it’s primary function being to rescue.  Not so in “this post 911 world”.

Spare me the sappyness of yet another year of “in this post 911 world” rememberances.  I don’t know why I shouldn’t just get euthanized with the swine flu bioweapon.  Oh, and nice touch NSA assholes on frying my computer again, this time but real good.  I had pictures of my grandson on that machine I had not backed up so you suck big time.

“Gee Honey, this is scary!”

“Look at these hot dog rolls I forgot in the microwave!”

Yes we don’t use the microwave in the camper other than it being an overpriced bread box.  Low and behold the month old hot dog rolls looked just as fresh as the day they were bought.  Miracles of modern preservatives, or soylent green.

More Apocalypse News after the break.

The Scam that is Big Pharma, Swine Flu, and You

Gee, it’s kind of funny how this has been somewhat under the radar as far as the U.S. corporate media goes:

Yup, you read that right.  Big Pharma, which is personified by the Bigger-Than-Big Pharma company known as Pfizer, is guilty as sin of defrauding Americans in regards to their health.   This isn’t just stealing money, this is fucking with people’s HEALTH.


US drugmaker Pfizer has agreed to pay $2.3bn (£1.4bn) in the largest healthcare fraud settlement in the history of the Department of Justice.

It comes after the firm was found to have illegally promoted four drugs for uses which had not been approved by medical regulators.

A subsidiary of the firm pleaded guilty to misbranding drugs “with the intent to defraud or mislead”.

US officials said Pfizer would have to enter a corporate integrity agreement.

That last bit just about made me spit my coffee across the screen.  A “corporate integrity agreement”?   WTF is THAT?   I know, it’s a training program that teaches you how not to get caught.  You buy the workbooks from Neil Bush’s company, you know it’s sort of a “No Corporation Left Behind” type of thing.

More importantly, these are the people who want to mass-vaccinate us this fall for this “swine flu” swindle.

Now check this out.   Are you sitting down?

Yes, the World Health Organization is admitting to allowing European researchers to releasing “mock up” vaccines which contain viruses which people haven’t been exposed to people in a while, in order to “speed up” the regulatory process for the vaccines.

“Speed up the regulatory process” = “making money, lots of it, quicker”.

TOKYO (Reuters) – The entire squad of Japan’s Nippon Ham Fighters baseball team is being quarantined and tested for H1N1 influenza after three players contracted the virus.

Its been a while. Remember when I wrote “The Thirteenth” shortly after the vaccine plague?

The Spring came and went dully, and the Summer has been odd. I usually love Summer, was looking forward to losing myself in the mindless meditation of the Lake’s waters. I thought it would help heal my horror and loss. The weather has been unusually cool, too cool to really be in the water. I shouldn’t complain, for truly it has been perfect in ways. Cool nights, warm days, without being too hot. Perfect growing weather. But a lot of the seeds I saved didn’t germinate, and I have nowhere near enough food stored to survive a Michigan winter.

I need to find you. I need you like air to breathe.

A really simple diary.  Search or not search.  Do what you will and I do know and am aware that some of my sources might be considered as “righttard” oriented.  In a proactive answer to that did you get the “change” promised after Barry Soetoro was selected?  I know it’s nasty and highly un-Orange like but just look around and take in what is going on.  It is indeed going to “change”.  Before it does though the plan is to spend yet another spiritual cleansing session deep in the woods of Maine.

A Viral Conspiracy Theory of ‘Oops’

To ‘oops’ or not to ‘oops’ – that is the question! To concoct nefarious plots in dark basement labs and smoke-filled back rooms, or accept that accidents do happen and arm ourselves with some knowledge of the processes. And to hear what’s actually being said by the ‘officials’ who so love to hoard whole classes of information We the People simply don’t need to know. Usually, if anyone’s keeping track, it’s more about ‘oopses’ that make ’em look careless than about actual nefarious plots or deeds.

The CT that got me banned at the Orange Rind made a specific charge on this question based on the announcement in late April of a flu outbreak in Mexico City, official releases specific to the nature of that virus, the actual technology used by researchers in the US and elsewhere in the world toward development of influenza vaccines, and the possibilities for an ‘oops’ (or worse) to occur at any of those facilities. All set against the MI-2 plot line harkening back to ancient Greek mythology, Bellerophon vs. Chimera.

I mentioned in that diary that genetic engineering is routinely used to craft varieties of influenza with enough mixed genetic specificities to allow a vaccine to be effective against more than one likely mutation of whatever strain is going around this year. That’s the truth. Though it turns out, according to the ‘experts’ who quickly weighed in to squash any speculations about an ‘oops’, that influenza viruses like to exchange whole genes and elements from entirely different strains in infected animals or in their water troughs at will and so promiscuously that it’s a complete wonder that we humans can even come up with actual strain varieties or vector titles at all! 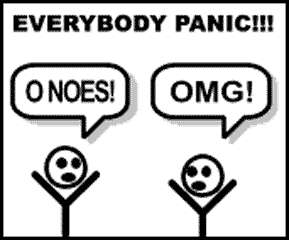 My first recommendation is that you hidez in a cat food box for the next 3 months: 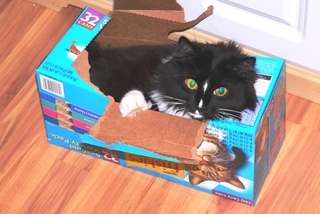 (Be sure box haz lots of food inside.)