Is the anti-masturbation drive of a O’Donnell any less extreme than some of the Islamic whacks opinions about human sexuality?

Are the Muslim bombers any less brutal than the Jewish clerics calling for the eradication of all Palestinians? Are either less deadly than the American Christians who call for bombing Women’s Health Clinics or for the murder of Gays?

Under the umbrella of all this ramped up hatred, lies the fact the we are losing the Class War; its pawns doing the dirty work of ensuring Peace Talks will not work, ensuring Populist ideas are disparaged, and most of all keeping the People of the Country and the World too divided to notice what has been done to them.

Sarah I Have No Ethics Palin gave the keynote speech tonight at the first National Tea Party convention in Nashville.

The former Alaska governor criticized the Obama administration’s handling of the attempted bombing of a U.S.-bound airliner on Christmas Day, saying the suspect should have been interrogated more intensely. She said he doesn’t deserve the constitutional rights that U.S. soldiers are willing to die for.

I guess this means nothing to Sarah Palin

and Other Cruel, Inhuman or Degrading

The States Parties to this Convention,

Considering that, in accordance with the principles proclaimed in the Charter of the United Nations, recognition of the equal and inalienable rights of all members of the human family is the foundation of freedom, justice and peace in the world,

Recognizing that those rights derive from the inherent dignity of the human person,

Considering the obligation of States under the Charter, in particular Article 55, to promote universal respect for, and observance of, human rights and fundamental freedoms,

Having regard to article 5 of the Universal Declaration of Human Rights and article 7 of the International Covenant on Civil and Political Rights, both of which provide that no one may be subjected to torture or to cruel, inhuman or degrading treatment or punishment,

Desiring to make more effective the struggle against torture and other cruel, inhuman or degrading treatment or punishment throughout the world,

Have agreed as follows:

The Geneva Conventions of 1949

In the case of armed conflict not of an international character occurring in the territory of one of the High Contracting Parties, each Party to the conflict shall be bound to apply, as a minimum, the following provisions:

(1) Persons taking no active part in the hostilities, including members of armed forces who have laid down their arms and those placed ‘ hors de combat ‘ by sickness, wounds, detention, or any other cause, shall in all circumstances be treated humanely, without any adverse distinction founded on race, colour, religion or faith, sex, birth or wealth, or any other similar criteria.

To this end, the following acts are and shall remain prohibited at any time and in any place whatsoever with respect to the above-mentioned persons:

(a) violence to life and person, in particular murder of all kinds, mutilation, cruel treatment and torture;

Both of which were approved by the U.S. Senate and signed into law.

Sarah Palin doesn’t believe in the rule of law either as evidenced by her her complete ignorance of the rights afforded those arrested within the United States:

The Constitution reserves many rights for those suspected of crime. One of the fears of the Framers was that the government could act however it wished by simply saying an individual was a suspected criminal. Many of the rights in the Constitution and the Bill of Rights, such as habeas corpus, the right to remain silent, and the right to an attorney, are designed to ensure that those accused of a crime are assured of those rights.

Police were able to take advantage of the fact that not everyone knows their rights by heart. In fact, it is likely that most citizens could name a few of their rights as accused criminals, but not all of them. The police’s position was that if the accused, for example, spoke about a crime without knowing that they did not need to, that it was the person’s fault for not invoking that right, even if they did not know, or did not remember, that they had that right.

This was the crux of the issue in Miranda v Arizona. In 1963, Ernesto Miranda was accused of kidnapping and raping an 18-year-old, mildly retarded woman. He was brought in for questioning, and confessed to the crime. He was not told that he did not have to speak or that he could have a lawyer present. At trial, Miranda’s lawyer tried to get the confession thrown out, but the motion was denied. In 1966, the case came in front of the Supreme Court. The Court ruled that the statements made to the police could not be used as evidence, since Miranda had not been advised of his rights.

Sarah Palin, her supporters, members of the Tea Party, Conservatives and the Republican Party don’t believe in the Constitution or the Bill of Rights because they give the accused and the weak protections they would have never agreed to. These people are anti-immigrant, against equal rights, racist and believe that America is a Christian Nation when the Constitution clearly states that there will be a separation of church and state.

Why not burn Obama in effigy too, you cowards

Since a group of tea bagging protestors comprised of mostly white people have the cojones to burn Speaker Nancy Pelosi and Congressmen Tom Perriello in effigy, I thought it would be a good idea if someone in the media would go so far as to ask these people why they don’t just go all the way in their supposed “defense of freedom and liberty” and burn President Barack Obama in effigy as well. I mean, if they are really brave and all, why shouldn’t they?

A few months ago our fellow blogger at DKos KingOneEye (or NewsCorpse as he is known at Docudharma) wrote a diary titled FOX NEWS is Killing the Republican Party which posited that the far right media and their meat puppets like Beck, O’Reilly and Hannity, along with Rush and other assorted assknuckles, were pushing a shrinking party into a purity purge that they can not win elections with.

Transcript and more below the fold

The Beckers: An Army of Darkness 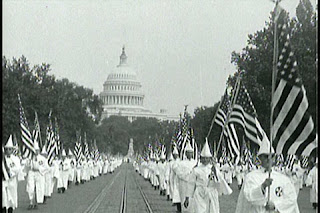 “The preparations for Hate Week were in full swing, and the staffs of all the Ministries were working overtime. Processions, meetings, military parades, lectures, waxworks, displays, film shows, telescreen programmes all had to be organized; stands had to be erected, effigies built, slogans coined, songs written, rumours circulated, photographs faked..”.

The angry, shrieking hordes came forth this weekend in the nation’s capitol, waving their racist placards, their bagged birth certificates, their Gadsden flags and their Nancy Pelosi Nazi signs. The were legion and they got media coverage, unlike the massive antiwar demonstrations during the darkest days of the Bushreich when these phony patriots, aggrieved citizens and authority worshipping swine were content the ‘Bomb Em All and Let God Sort Em Out’ foreign policy of their Jesus kissed emperor. It was a gathering of blistering hatred, many smaller ‘tea parties’ were being staged across the fruited plain on that marvelous day, the day after the hallowed 8th anniversary festivities that marked the coming of the glory of the lord on that historic Tuesday morning when the American Reichstag Fire dragged us kicking, screaming and swaddled in the almighty stars-n-stripes into the New American Century.

A group called “Patients First,” a project of the lobbyist-funded Americans for Prosperity, has been going around the country and hosting tea parties in opposition to “government-run health care.”

Yesterday, AFP decided to hold a protest in front of the offices of Democratic Rep. Frank Kratovil’s (D-MD1) office. Despite the fact that Rep. Kratovil has yet to take a stance for or against health care reform, the AFP protesters felt it would be appropriate to voice their concerns by hanging him in effigy.

And I thought calling the Congressman or writing him was the best way to influence his opinion! I didn’t know this was an option.

It’s not an option, of course, unless you have lost your mind or you are a hate mongering sociopath.

Now, if I were Rep. Kratovil, I would vote for health care reform just to spite this proto-lynch mob.

Unfortunately, I am not he, and I don’t know how Congressman Kratovil will respond to this.

This is not the first time a Democratic Politician has been threatened with hanging by voices empathetic to the GOP. Recently Sam the Propaganda machine suggested that someone should String up Senator Chris Dodd.

I do not know if the goal is to threaten Kravotil into opposing Health Care reform or if these tea baggers are just so mindlessly hateful and violent that this is the only way they can express themselves. I honestly do not know what the fuck these clowns are thinking when they do this kind of shit.

But I do know what the goal is. The goal is to use threats of violence to achieve their political means.

And that is the definition of terrorism.

So when is the line in the sand drawn? When do We The People who voted for NotTheGOP put our foot down and say ENOUGH to these Corporatist psychotic brownshirts?