On January 27, 1913 at the Doherty Silk Mill in Paterson, New Jersey, a workers committee requested a meeting with management. They wanted an end to the hated four-loom system which had doubled their work load with no increase in pay, and had caused the lay-offs of many of their fellow workers. When four members of that committee were fired, 800 silk workers, almost the entire work force, walked off the job spontaneously. They were without union organization to back them up. Being mostly foreign-born, non-English-speaking, unskilled workers, the AFL’s United Textile Workers did not want them.

But, in fact, there was another textile union in Paterson at that time: the IWW’s National Industrial Union of Textile Workers, Local 152 which local organizers, Ewald Koettgen and Adolph Lessig had established over several years of organizing. It was there, with this stalwart band of 100 Wobblies, that the strikers found a union willing to back up their strike. As it became clear that Doherty would not bargain with the strikers, Local 152 request help from IWW headquarters in Chicago.

On February 25, 1913, national IWW organizers, Pat Quinland, Carlos Tresca, and Elizabeth Gurley Flynn arrived to speak at a mass meeting. All three were arrested that night at the meeting. Strikers followed them to the jail and held a rally outside the jail, singing and shouting for their release. Women shouted, “When the strike is won, Gurley Flynn will be the boss!”

By the time Big Bill Haywood arrived, later that week, the strike had spread to silk mills across Paterson. 300 mills were shut down, and 25,000 silk workers were on strike. Big Bill advised the strikers: “fold your arms or put your hands in your pocket and let the manufacturers do the worrying.”

It was bound to happen sooner or later – somebody realized that exercising free speech in this country can get you arrested.

“Here, the government has sought impermissibly to prohibit the political speech at issue rather than enforcing the criminal law,” the motion for a temporary restraining order states.

On various levels, this crushing of unpopular speech is being repeated all over the country. Some are already comparing the OWS to the Free Speech Movement of the 60’s.

However, I think the current battle over the right of free speech more resembles a forgotten legacy in American history from a century ago. When leftists with unpopular political ideas willingly allowed themselves to be arrested in the defense of freedom. 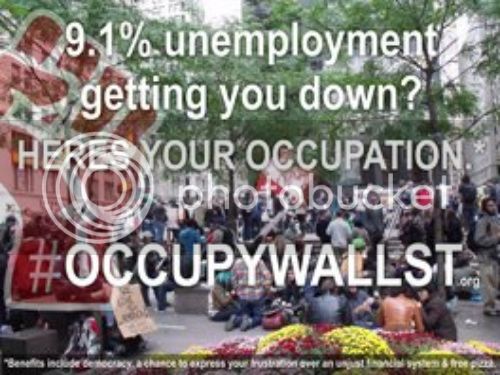 Benefits include: democracy, a chance to express your
frustration over an unjust financial system & free pizza