FRONTLINE Presents: The Warning (on the economic meltdown)

FRONTLINE INVESTIGATES THE ROOTS OF THE FINANCIAL CRISIS

In the devastating aftermath of the economic meltdown, FRONTLINE sifts through the ashes for clues about why it happened and examines critical moments when it might have gone much differently.

In The Warning, airing Tuesday, Oct. 20, 2009, at 9 P.M. ET on PBS (check local listings), veteran FRONTLINE producer Michael Kirk (Inside the Meltdown, Breaking the Bank) unearths the hidden history of the nation’s worst financial crisis since the Great Depression. At the center of it all he finds Brooksley Born, who speaks for the first time on television about her failed campaign to regulate the secretive, multi-trillion-dollar derivatives market whose crash helped trigger the financial collapse in the fall of 2008.

The Center on Budget and Policy Priorities economists just confirmed the trends of the last 8 years — Most of the the Economic Gains went to the very Wealthy, while the rest of us struggled to just get by

Income Concentration in 2007 Was at Highest Level Since 1928, New Analysis Shows

Two-thirds of the nation’s total income gains from 2002 to 2007 flowed to the top 1 percent of U.S. households, and that top 1 percent held a larger share of income in 2007 than at any time since 1928, according to an analysis of newly released IRS data by economists Thomas Piketty and Emmanuel Saez.

A number of economic commentators have begun to agree that an enormous, generational shift of wealth in America has occurred. This vast operation, which I shall call The Great Reagan Robbery, was nothing less that a program to cap the standard of living of the majority of Americans at mid 1970s levels and transfer all future increases in national wealth to the top 1% of the population. Here is how it was executed.

1. A telegenic pitchman for corporate America, Ronald Reagan, was elected to undermine the legitimacy of government, glorify the private sector, and demonize the poor.

3. Taxation was made more regressive, effecting a huge transfer of wealth from the working class to high-earning professionals and investors.

4. Speculative bubbles and financial scams, like the S&L debacle, enriched well-connected investors at the expense of the taxpayers.

5. A successful class war against the poor was launched, resulting in cuts to welfare and other programs that reduced income inequality.

6. Rapid inflation in the price of amenities Americans had once taken for granted, such as safe neighborhoods, good education, and adequate health care, enriched affluent providers of housing, education, and medicine, as these became costly “luxuries” for the general population.

7. Americans who were losing economic ground were encouraged to load up on debt, further enriching the lenders and holders of capital.

8. A blanket of ideological propaganda concealed the problem of growing inequality by fostering a culture of worshiping the rich and maintaining the myth of universal access to riches.

The bottom line on The Great Reagan Robbery is that it accomplished the most massive transfer of wealth within American society in our entire history without arousing any politically significant resistance. It was a brilliantly executed class war, in which the rich decisively defeated the rest of us.

The problem the rich now face is that they succeeded too well. The momentum of the stealthy, unstoppable, robbing machine they created is continuing to push the majority of Americans into third-world debt slavery and subsistence existence, and this sharp decline will undermine the entire economy, including the fortunes of the rich. 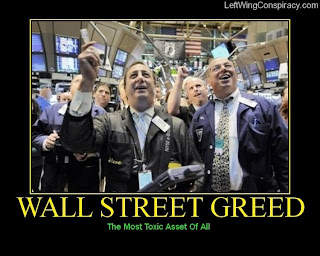 It’s been awhile since my last entry in my series on the New Deal.  I’ve dipped into the motherlode of picture archives – the FSA pix from the Library of Congress, and got lost amongst the rich legacy therein for a time.  Starting with Dorothea Lange, with some 4000 entries.  This picture of hers is one of the most iconic from the period:

A picture’s worth a thousand words, right?  And everyone thinks they know what this picture’s about.  But consider the caption that goes with:

Migrant agricultural worker’s family. Seven hungry children. Mother aged thirty-two. Destitute in pea picker’s camp, Nipomo, California, because of the failure of the early pea crop. These people had just sold their tent in order to buy food. Of the twenty-five hundred people in this camp most of them were destitute.

Permanently changed my understanding of the picture.  Throughout the diary, text in italics is direct quotes from the photographers notes

Let me say it right up front: I’m getting sick and tired of the charlatan blowhards claiming that the New Deal “didn’t work”.  I was already mulling over a diary on this, when a Feb. 3 article by Charles McMillion (Blog for America’s Future) came to my attention:

The monthly data for industrial production show a near three-year collapse under President Hoover, ending when FDR came to office in March 1933. Production rocketed by 44 percent in the first three months of the New Deal and, by December 1936, had completely recovered to surpass its 1929 peak.

It’s time to take a peek at President Hoover’s policies.

A Message from History: Democrats, Attack!

I’m not normally one to rant – among the scores of diaries I’ve posted over the course of the past three years, only a handful are of the “screed” variety.  The sort of diaries I usually do don’t lend themselves to soapbox-style indignation – there’s not much to be gained, legislatively or electorally speaking, from a knock-down, drag-out flame war over, say, assigning blame for the outbreak of the First World War.

Yet, as I’ve often stated, sometimes the worst thing about being an historian is that one often has a pretty good idea of what’s coming next, decline-and-fall-of-civilizationwise.  Certain patterns are discernable, and seem to play out each time a civ rises to a leadership role in human development or the exercise of might – and no civilization has ever shown itself immune to the degrading effects of time.  Since often an understanding of the events of the past can inform the shape of responses in the present, it’s here that this historian perceives a role for an historical rant.

One thing about the New Deal is that it was well documented.  Some of the best photographers of the day were hired by Roy Stryker in the Farm Security Administration.  Lewis Hine worked for the TVA/CCC.

Pretty much every New Deal agency sent photographers out to document both the need for their activities, and also the results.  There’s some terrific photographs which don’t have the artist identified.  And I do mean artist.

Back in the days of the New Deal, there was a lot of emphasis on work.  On labor actually.  Organized labor was a force, and the powers that be were worried about insurrection from the left in the US.  So it’s not surprising that work is depicted in an heroic light.

In light of the debates over what is or isn’t worthy of inclusion in the stimulus package, I thought it might be interesting to look at work in FDR’s day.

This is a followup to my diary on Post Office Murals in the New Deal.

Lewis Hine was a great photographer, and also an intrepid social activist.  Amongst his most famous works are pictures of child laborers in the early part of the 20th century, for the National Child Labor Committee.  The black and white slides with this music are mostly all by Hine.

In defense of autoworkers

Original article, a comment by Greg Shotwell, via Socialist Worker (US):

THE CEOs of the three Detroit automakers will return to Congress December 4 to request some $36 billion in loans from the federal government. As a condition of receiving that aid, the automakers were told to provide Congress with a plan for “restructuring” their companies that will include plant closings, elimination of tens of thousands of jobs, and cuts in benefits.

The United Auto Workers (UAW) is prepared to accept this. In a December 3 press conference, UAW President Ron Gettelfinger announced that the union would allow the companies to defer payments into a trust fund that covers retiree health care and to eliminate the “jobs bank” program that provides pay and benefits for laid-off workers.

Gregg Shotwell, a recently retired GM/Delphi worker and a founder of the Soldiers of Solidarity network, challenges the efforts by employers and politicians to blame the auto crisis on union workers: