Famous Nefertiti Bust May Be A Fake

One of the most famous pieces of ancient art might not be so ancient, after all.

One thing about the New Deal is that it was well documented.  Some of the best photographers of the day were hired by Roy Stryker in the Farm Security Administration.  Lewis Hine worked for the TVA/CCC.

Pretty much every New Deal agency sent photographers out to document both the need for their activities, and also the results.  There’s some terrific photographs which don’t have the artist identified.  And I do mean artist.

Back in the days of the New Deal, there was a lot of emphasis on work.  On labor actually.  Organized labor was a force, and the powers that be were worried about insurrection from the left in the US.  So it’s not surprising that work is depicted in an heroic light.

In light of the debates over what is or isn’t worthy of inclusion in the stimulus package, I thought it might be interesting to look at work in FDR’s day.

As the Associated Press reported:

With the return of a long-sought masterpiece of antiquity, Italy on Friday trumpeted one of the successes of its campaign to recover what it says are looted treasures from museums and collectors around the world.

The 2,500-year-old vase by Greek artist Euphronius, which Italy regained after signing a deal with the Metropolitan Museum in New York, was feted in Rome at an official presentation.

The Euphronius Krater – a large vase painted with scenes related to Homer’s epic poems “The Iliad” and “The Odyssey” – is regarded as one of the finest examples of its kind. The vase was used as a bowl for mixing wine and water.

“It is universally considered the best work by the artist,” Culture Minister Francesco Rutelli said at the ceremony. Also attending was his predecessor, Rocco Buttiglione, who started the country’s high-profile campaign to recover art. 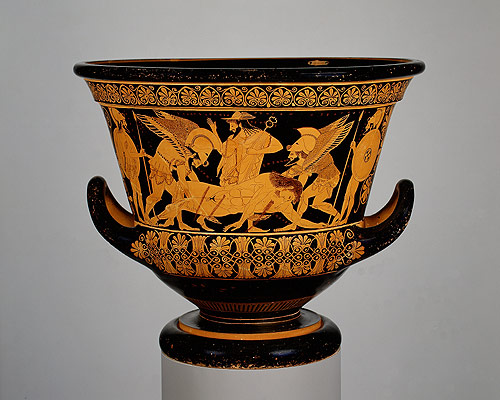 The Sixth Century BCE was a golden age of Greek vase painting, with innovations and individual styles proliferating at an unprecedented pace. Perhaps not coincidentally, the first signed vases had appeared only at the beginning of that century. Soon after came revolutions in figure painting technique and the first explicit attempts to realistically depict the physical world.

Euphronius was one of a group of vase painters whose work was as revolutionary as would be that of Cavallini, Cimabue, Duccio, and Giotto, some 1800 years later. To understand the depths of this revolution, all one need do is think of their predecessors, from highly stylized Egyptian and Near Eastern art to even the stunningly vivid and vivacious art of the Minoans. In the former two realism wasn’t even considered; in the latter, it was only, albeit marvelously, attempted.