A lot has happened as we complete the third week of the DREAM Now Series.  The DREAM Act picked up two new co-sponsors in the U.S. House: Mike Thompson (D-CA-1) and Chellie Pingree (D-ME-1).  Two extremely important and influential organizations have also come out strongly in support of passing the DREAM Act as a downpayment on comprehensive immigration reform: the Center for American Progress and the AFL-CIO.  Finally, a major victory was won in Arizona where the deportation of Marlen Moreno was deferred.  Please express support for the above in anyway possible.  It has all helped build a lot of momentum for passing the DREAM Act, this year.

On one side we have two brilliant strategists and great team leaders, and on the other side there’s a telegenic spokes-model and a semi-senile dinosaur.

And unfortunately for all of us, the great leaders are competing for bragging rights about a kids’ game, while the bozos are fumbling and bumbling and humbugging our world into oblivion.

McCain and Obama are idiots!

And since it’s pointless to ask how we could convert American politics into something more like the NBA, with brilliant leaders instead of clowns in charge, because we all know that isn’t going to happen…

We might as well ask how to convert the NBA into something more like American politics, and that would be simpler than you might imagine, because…

All we have to do is make sucking up to the fans the only qualification for coaching, with the proviso that none of the candidates has any kind of record as a coach, or even as a player.

“You/We are the ones we/you were waiting for!”

“I love your values!”

And if you subtracted sucking up to the fans from McCain and Obama, both those clowns would disappear, like smoke blown away from a mirror.

The Week in Editorial Cartoons – Of Human Bondage

Maverick to AZ children: MARK IT ZERO!!!! You are entering a world of pain

This is GOOD NEWS for John McCain, and it comes at the expense of 42,000 Arizona children. What a maverick.

Roughly translated, McCain and the Arizona GOP’s message to sick AZ children would read like this . . . .

SCHIP costs money that should be going to tax cuts for the rich. Get a job and buy private insurance. Until then, don’t get sick, and if you do, die quickly.

U.S. Sen. John McCain may finally get his health-care wish, which is less care for fewer of Arizona’s children.

The Arizona legislature voted to permanently end the state’s participation in the State Children’s Health Insurance Program (SCHIP), 13 years after McCain voted against it and 3 years after leading the charge against reauthorizing the popular bi-partisan program.

McCain’s home state of Arizona is now the first and only state to ever opt out of SCHIP. 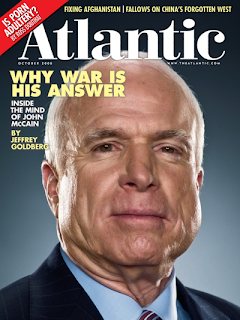 Also cross-posted at MyDD and Openleft.

In the Wall Street Journal on September 13, the two Repubs and one former Democrat wholeheartedly endorsed sending more of our troops to eat $#!t sandwiches in Afghanistan.

We are confident that not only is it winnable, but that we have no choice. We must prevail in Afghanistan.

However, we need more than the right team and the right strategy. This team must also have the resources it needs to succeed-including a significant increase in U.S. forces.

There’s Trouble Dead Ahead — And the Band Played On …

What the band played as Titanic slowly began to sink is never disputed – ragtime, waltzes, specific tunes noted by survivors included ‘Alexander’s Ragtime Band’ and ‘In The Shadows’. But a question mark still hangs over what the last song was as Titanic’s stern began to rise clear of the Atlantic Ocean, and indeed, would it be physically possible for them to play anything in those conditions?

Welcome to the 18th installment of “Considered Forthwith.”

This week, I will look at the House Armed Services Committee and Senate Armed Forces Committees. Obviously, these members are the ones to contact to advance the bill that would repeal the “Don’t ask/don’t tell policy.” These are also the committees that need a proverbial kick in the pants to advance legislation that would close Gitmo. More information below.

Sneak Preview! How to take down Bush/Cheney

This is a SNEAK PREVIEW for all you Dharma Bums who want action and accountability for 8 years of War Crimes, High Crimes and Crimes against Humanity.

If you want to host a War Crimes Accountability series diary let me know. I will be posting these myself until someone wants me to pass the baton to them. E-mail me at ministryoftruth@live.com if you are interested, or say so in the comments below.

Let me know if you think this is an effective course of action, or if you have any other thoughts or ideas to share.

This diary will be published at 10a.m. tomorrow morning on Orange. Please be there to rec it up, as well as to call for Justice!

Dear Dharma Bums, I submit for your consideration and approval a plan to bring the Bush/Cheney Administration to justice.

If you don’t support warrantless wiretapping, The Patriot Act, torture or any of the other high crimes and War crimes committed by the Criminal Bush Junta, please use the contact information below to demand justice for War Crimes. Contact Speaker Pelosi and the Representatives of the House Rules Committee today and ask them to support H.Res 383.

H.Res 383 was introduced by Rep. Barbara Lee (D-CA9) and is designed to act as a Congressional oversight bill that would establish a select committee to review national security laws, policies, and practices. Better yet, this committee would have power of subpoena.

Below the fold you can find the Contact Information for Speaker of The House Nancy Pelosi and the members of the House Rules Committee to which H.Res 383 has been referred, as well as the AG’s Office and White House. Call or write to let them know that you support H.Res 383 and accountability for Bush/Cheney era War Crimes. How the Press, the Pentagon, and Even Human Rights Groups Sold Us Army Field Manual that Tortures

Originally published at AlterNet — If you wish to repost this essay you can download a .txt file of the html here (right click and save). Permission granted.

A January 17 New York Times editorial noted that Attorney General designate Eric Holder testified at his nomination hearings that when it came to overhauling the nation’s interrogation rules for both the military and the CIA, the Army Field Manual represented “a good start.” The editorial noted the vagueness of Holder’s statement. Left unsaid was the question, if the AFM is only a “good start,” what comes next?

The Times editorial writer never bothered to mention the fact that three years earlier, a different New York Times article (12/14/2005) introduced a new controversy regarding the rewrite of the Army Field Manual. The rewrite was inspired by a proposal by Senator John McCain to limit U.S. military and CIA interrogation methods to those in the Army Field Manual. (McCain would later allow an exception for the CIA.)

According to the Times article, a new set of classified procedures proposed for the manual was “was pushing the limits on legal interrogation.” Anonymous military sources called the procedures “a back-door effort” to undermine McCain’s efforts at the time to change U.S. abusive interrogation techniques, and stop the torture.