And luck o’ the Irish to y’all!

I am going to attempt to make colcannon for dinner.  If anyone has any experience with that, or a good recipe to share, please post it here!  Otherwise, I’m winging it.

There’s no one as Irish as Barack O’Bama {this is the YouTube video, no embed available}

there’s no one as Irish as Barack O’Bama.

From the old Blarney stone, to the green hills of Tara,

there’s no one as Irish as Barack O’Bama.

As you may already know, this catchy tune was an Internet phenom.  It is also responsible for the most visited essay in Docudharma history: I KNEW he was Irish!* by ctrenta.

On the link above you will find an earlier version of the song – it has more than 500,000 views on YouTube.  A few days ago the band, Hardy Drew and the Nancy Boys, contacted us and requested that we update with the new version (same as the one above) in honor of O’Bama’s victory.

As for our traffic, the graph below shows the number of daily visitors over the last 30 days.  I did this screen capture from SiteMeter at 2 PM today (11/07/08).  The dotted line shows our average visits for a few months prior (around 700-800/day).  On Oct 22nd I started noticing a big increase in the number of visits on our site. The bulk of the traffic is going to ctrenta’s essay.   This peaked the day after election day and is still generating thousands of page views.    I am astounded. 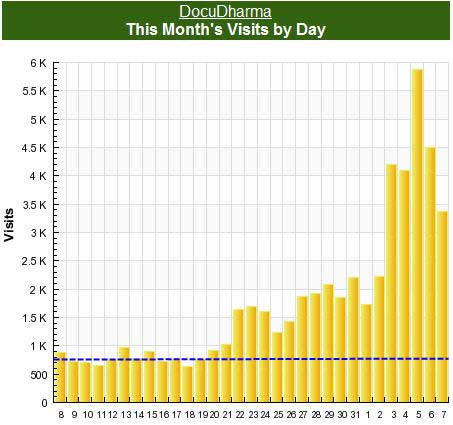 Here in the Boston area it’s a legal holiday. It’s also a holiday in Cambridge and Somerville. Evacuation Day is one of only two celebrated in the U.S. The other is in New York.


On March 17, 1776 the 11-month siege of Boston ended when the Continental Army, under Washington, fortified Dorchester Heights with cannons captured at Ticonderoga, forcing General Howe’s garrison to attack or flee. To prevent what could have been a slaughter of his troops, Howe agreed to retreat to Nova Scotia via his ships without setting the city on fire as he left.

Both celebrate the departure of the forces of darkness of the time. The forces who sought to deprive the people of the right to life, liberty and the pursuit of happiness.

March 17th is also, and very obviously, a celebration of the Irish in America. I’m a full-blooded member of the Celtic tribe (pronounced keltik, from Greek (Keltoi)) and Boston born so it’s a double celebration day here. It is for a lot of Irish-Americans and has been since the original Evacuation Day.

Many of the soldiers who volunteered to serve under General George Washington to break the yoke of British colonialism were Irish Catholic. These soldiers and their families experienced first hand British occupation and suppression. Many of their sacrifices during the War of Independence were critical in bringing about the establishment of the United States of America. After a failed movement in 1876, the holiday was finally proclaimed on the 125th anniversary in 1901.