Update 4: it appears they’re doing one junk shot after another, at least they were on Friday, each has failed so far to lodge enough material to restrict the flow very much if at all.

Despite Obama’s (public) orders, they have stopped drilling one of the relief wells.   Which means this could all come down to one relief well attempt months from now.

Update 3: again as should be obvious to anyone watching the feed, the junk shots have failed:

But the technician working on the effort said that despite the injections at various pressure levels, engineers had been able to keep less than 10 percent of the injection fluids inside the stack of pipes above the well. He said that was barely an improvement on Wednesday’s results when the operation began and was suspended in its 11th hour of operations. BP resumed the pumping effort Thursday evening for about 10 more hours.

“I won’t say progress was zero, but I don’t know if we can round up enough mud to make it work,” said the technician. “Everyone is disappointed at this time.”

Frankly, I think they knew this was never going to work from the start, and it’s a bunch of theatre and gamesmanship with Obama that we’re seeing.

Update 2: Thad Allan is now claiming the Junk Shot is working ‘Oil flow is stemmed’–but he said that yesterday, and it was an outright lie.

He said that overnight, workers pumped what is known as “junk shot,” a mix of more substantial materials, like golf balls and shredded tires, into the well, and he said they would follow with more mud later Friday. The junk shot serves as a “bridge,” he said, for the mud injections, to strengthen their ability to counteract the leaking oil.

Update 1: CNN is reporting that the 2nd attempt– with ‘Junk Shot’  has started. However, there is no indication of that on the live feed at all.

The top kill has not succeeded in reducing the pressure enough to inject concrete.  They have ‘temporarily’ stopped–as anyone watching the live stream could have figured out.

BP had to temporarily stop its effort to plug the well when engineers saw that too much of the fluid they were injecting into the well was escaping along with the leaking crude oil.

Word is they are going to try the junk shot. Maybe, then another top kill attempt?

I worry they’re gonna blow this thing up.

The leakage rate is significant (I calculated earlier that it was around 17,000 bd, which lies within the newly reported range of 12,000 to 19,000 bd, and may have been higher than BP were actually anticipating. (Though the leak may also have increased a little as the mud was injected at higher pressures). The operation has already used all the mud on one of the supply boats, and has moved to the second (there is a third standing by so they won’t run out). The concern, however is now with the volume of cement that will be required for the seal.

The high volume that is leaking would require that additional amount to the volume needed for the seal itself, and that may be closer to the available capacity of the system that they have in place, or the supplies that they have on site to achieve the seal. If that is the case, one can understand the desire to at least partially plug the leaks in the BOP, and to wait until the mud column fully balances the pressure in the oil reservoir before starting this phase of the operation.

Until this point in the operation the volume of cement required to create an effective plug has not been seen as an issue.

Why are we continuing to kill people in Afghanistan? And don’t give me any Bushisms

BP’s Gulf Blowout And Our Future 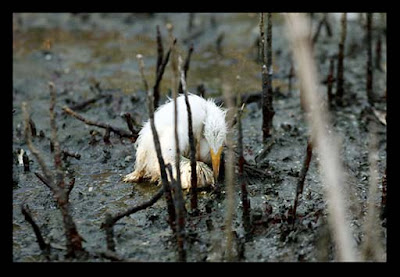 [My friend M sent me the following thoughts which I crosspost here from Fire on the Mountain with permission.]

Our son-in-law, Lee, earns his living as a fisherman in Key West. Has done so for 30 years. Today is his 52nd birthday and he is now, effectively, jobless for the rest of his life. Being a small fisherman has always been an iffy proposition, because you’re dependent so much on the weather, and for the last few years, the weather has become totally unpredictable. Also for the past five years NOAA has been imposing increasingly severe restrictions on what fishers can catch — how much and when and where — all in the name of preserving fish populations.

Good News from the Gulf, and the Next Big Lie (Second Update)

The “top kill” effort, launched Wednesday afternoon by industry and government engineers, had pumped enough drilling fluid to block oil and gas spewing from the well, Allen said. The pressure from the well was very low, he said, but persisting.

Allen also said that, later Thursday, an interagency team would release a revised estimate of how much oil had flowed from the well into the gulf before the “top kill” effort began.

Think of yourself as a turtle on the information super-highway. It took a long, long time for you to find out anything about how much oil was flowing into the Gulf of Mexico from Deepwater Horizon.

But now a semi-truck full of bullshit is rolling down that highway at a hundred miles per hour, and it’s aimed at you, little turtle!

The pressure from the well was very low, he said…

And a very low estimate of total damage is on the way!

What kind of estimate of total flow would some pointy-headed independent scientists have produced, when that godawful leak was young and frisky?

We info-turtles will never know.

And why did BP waste so much time with preposterous gew-gaws like the “top hat” instead of applying the “top kill” right away?

We info-turtles will never know.

Update: And now suddenly on the video feed you can see an ugly mess of mud and who knows what boiling out of the pipes!

But I might as well mention (since it wasn’t obvious enough for some people) that the main subject of my diary is what comes next, in the form of low-ball estimates of the damage.

There are plenty of ROVs out there which can operate at 5,000 feet, and if anyone in the chain of command had wanted a better estimate than eye-balling a video feed allows, we would already have some real measurements, instead of a very fuzzy collection of videos.

But now it doesn’t really matter what anybody sends down to the well-head! The flow has been radically diminished, at the very least, and there’s essentially nothing left to measure.

Second Update: And now of course it has all gone backward, and BP has suspended their “top kill.”.

BP had to halt its ambitious effort to plug its stricken oil well in the Gulf of Mexico on Thursday afternoon when engineers saw that too much of the drilling fluid they were injecting into the well was escaping along with the leaking crude oil.

Technologically Advanced at One Thing

And that’s ALL, that’s what the whole business economy is geared to and who pays when they aren’t regulated and that creates huge problems, like the criminal enterprises many have become, everyone does but them and their investors!

And it’s not only what’s going on in the Gulf and oil companies and their so called best of the best…………………………… executives, it’s across the board in every big industry and big business model, MONEY is their only concern and not long term growth, getting as much as they can as quickly as they can and hope for the best and when something happens blame everyone else for their extreme failures!

Tate Modern in display of voyeurism for photography curator’s debut

U.S. withdrawal from Iraq will be on time, Vice President Biden says

U.S. to suspend new exploratory oil drilling in the Arctic

Floods cause havoc as beavers bite the land that saves them

Hezbollah theme park woos fighters for next war with Israel

Trampled in a Land Rush, Chinese Push Back

In Somalia’s war, a new challenger is pushing back radical al-Shabab militia

For Your Consideration: Why “Top Kill” Won’t Work

Memo to Rand Paul, the jig is up.

Now here is the juicy part. It turns out that Jesse Benton was the guy who was the lead point man in issuing the non rejection of Ron Paul’s Nazi donation that he received from Don Black, who is notorious as an ex KKK grand wizard and founder of the white supremacist website Stormfront.org