Lies Your Government Tells You – And How They Do It

During the Deep Water Horizon spill, Obama put BP in charge of hiding the huge extent of the destruction, they poured in this toxic corexit stuff, and that made the spill much much worse.

This year alone 10% of the manatees in the Gulf have died.

People in the area are having skin lesions and other problems.

Other parts of his body, however, seem to be in perpetual disrepair. Dizziness, nausea, diarrhea, bloody stools and cognitive issues surface intermittently, painful reminders of the toxic assault he and untold others endured following the April 2010 explosion on the BP Deepwater Horizon oil rig.

Several government agencies and BP together hired a public relations firm together to tell lies about the spill to the public, and that same firm – then call Pier System, now  called Witt O’Brians, has been put in charge of lying about the Arkansas tar sands spill.

The criminals are firmly in charge.

Someone posted this on the great orange, to prove that ‘political scientists’ say Obama isn’t a republican after all.

Note that the metric used is decimal notation.

Wikileaks May Shut Down

LONDON – WikiLeaks founder Julian Assange said Monday that financial problems may lead to the closure of the notorious secret-spilling site at the end of this year.

The banksters have succeeded in starving 95% of wikileaks’ funds, and they have stopped posting new leaks, in order to concentrate on fund-raising.

The statement says that in order to ensure survival, WikiLeaks must “aggressively fundraise in order to fight back against this blockade and its proponents.

WikiLeaks is under attack by the big financial services companies , but there are still ways you can beat them.

Censorship, like everything else in the West, has been privatized.

As a result of exposing U.S. embassies from around the world, five major US financial institutions, VISA, MasterCard, PayPal, Western Union and the Bank of America, have tried to economically strangle WikiLeaks The attack has blocked over 95% of our donations, costing tens of millions of dollars in lost revenue. The attack is entirely political. In fact, in the only formal review to occur, the US Treasury found that there were no lawful grounds to add WikiLeaks to financial blockade .

From the wikileaks donation page, here:

The Arctic Is Open For Business

The Northeast Passage Is Open

I thought this news would still be a year or two away, but here it is.

I can’t even begin to summarize this, as every word is so important, and so very scary, but:

But environmental scientists say there is now no doubt that global warming is shrinking the Arctic ice pack, opening new sea lanes and making the few previously navigable routes near shore accessible more months of the year. And whatever the grim environmental repercussions of greenhouse gas, companies in Russia and other countries around the Arctic Ocean are mining that dark cloud’s silver lining by finding new opportunities for commerce and trade.

I will add only this: once you have added new industries, new jobs, new human settlements, all dependent on a warming planet, you’ll have to fight them and their multi-national lobbies tooth and nail in addition to all the powerful forces we have to fight right now, making an impossible task all the worst.

Counterpunch has an excellent piece up on the New York City police and wall street’s  cozy relationship / revolving door.

And, especially something called the “PDU” – the Paid Detail Unit.


The corporations pay an average of $37 an hour (no medical, no pension benefit, no overtime pay) for a member of the NYPD, with gun, handcuffs and the ability to arrest.  The officer is indemnified by the taxpayer, not the corporation.

New York City gets a 10 percent administrative fee on top of the $37 per hour paid to the police.  The City’s 2011 budget called for $1,184,000 in Paid Detail fees, meaning private corporations were paying  wages of $11.8 million to police participating in the Paid Detail Unit.  The program has more than doubled in revenue to the city since 2002.

It’s an amazing piece.  Note also the bio of the author: she worked on wall street for more than 2 decades.

Still developing, but basically as part of OWS protesters went to a West Village Citibank (I think I used to bank at that branch, long long ago) and attempted to close account en mass.

Video here of a woman outside being dragged in to be arrested:

(ek hornbeck- Here are some embeds courtesy of lambert @ Corrente)

Below, I have details on the legality of the arrest.

I can’t get it to embed … as usual here.

(ek hornbeck- Only TheMomCat has the magic <iframe> touch.  Set your YouTubes to ‘Use old embed code’ and strip out everything that’s not between the <embed></embed>.  It’s hard for me to even get iframe to print!)

They Hate Us Because We Bring Freedom

KABUL, Afghanistan – Suspects are hung by their hands, beaten with cables, and in some cases their genitals are twisted until they lose consciousness in detention facilities run by the Afghan intelligence service and the Afghan national police, according to a study released Monday by the United Nations here.

The report provides a devastating picture of the abuses committed by arms of the Afghanistan government as the American-led foreign forces here are moving to wind down their presence after a decade of war. The abuses were uncovered even as American and other Western trainers and mentors had been working closely with the ministries overseeing the detention facilities and funded their operations.

Thank you Mr Bush! Thank you too, Mr Obama. And a big shout out to freedom lovers the world over. Breaking: Beatings And Arrests At OWS

Video of baton beatings at the link.

And according to Charles Grapsi, 100 arrests so far.

The NYT has a good article for once:

VOLOS, Greece – The first time he bought eggs, milk and jam at an outdoor market using not euros but an informal barter currency, Theodoros Mavridis, an unemployed electrician, was thrilled.

“I felt liberated, I felt free for the first time,” Mr. Mavridis said in a recent interview at a cafe in this port city in central Greece. “I instinctively reached into my pocket, but there was no need to.”

Mr. Mavridis is a co-founder of a growing network here in Volos that uses a so-called Local Alternative Unit, or TEM in Greek, to exchange goods and services – language classes, baby-sitting, computer support, home-cooked meals – and to receive discounts at some local businesses.

Part alternative currency, part barter system, part open-air market, the Volos network has grown exponentially in the past year, from 50 to 400 members. It is one of several such groups cropping up around the country, as Greeks squeezed by large wage cuts, tax increases and growing fears about whether they will continue to use the euro have looked for creative ways to cope with a radically changing economic landscape. 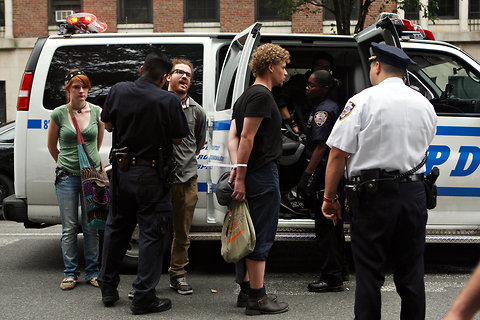