Why McNasty Has No Chance (again)

Much commentary today on the increasingly “nasty” turn of McShame’s candidacy.

Several bloggers have suggested that Obama must strike back hard against this negative campaign, citing Dukakis’ and Kerry’s failure to do so in prior campaigns.  I disagree.

This candidacy is distinguishable from the others.  Here, the electorate is already energized based on the economy and the war (which, leaving aside morality issues, are ultimately the same issue–the economy is bad because of the war).  McShame is turning to a nasty campaign very early.  Why?  Because he doesn’t have much to run on:  any time he is asked to detail his plans he falls apart in a shambles because his plans are unreal and unrealistic.  Continued spending with no source, no workable plan on the economy.

The problem with an early nasty campaign is that, after awhile, it is ineffective and makes the party doing it appear to be just nasty.  At some point, someone’s going to ask:  “well and good, Sir, but what is your plan?”  Even more scary:  “how will work?”

McShame’s campaign is egregiously bad and laughable.  As it is a joke, Obama is correct to laugh it off, at least until some substantive attack is made.

Four at Four continues below the fold with Brazil’s booming economy, ‘oil’ from algae, and a lake on Titan.

Senator “Tubes” Isn’t Going Down Without a Fight

Senator Ted Stevens (R-AK) pleaded not guilty at his arraignment on Thursday to 7 counts of lying on Senate disclosure forms, beginning the process of clearing his good name.  Stevens maintains that he didn’t knowingly file any false forms.  He did not, however, offer any defense for being an idiot (see “series of tubes”), nor for being a corrupt asshole.

But Stevens’ attorney, Brendan Sullivan, made it clear at the arraignment that their legal team was ready to fight the charges:

Stevens’ legal team asked the judge to move the trial to Alaska, where the senator has been a political patron since before statehood. Attorney Sullivan also asked that the trial date be speeded up to give Stevens his day in court before the Nov. 4 election.

“He’d like to clear his name before the election,” Sullivan told the judge. He added: “This is not a complex case. It should be one that moves quickly.”

Since Stevens is a Republican, his strategy most likely will also include proving that he is not gay, although Sullivan didn’t address that specifically at the hearing.

How to win big in November: impeach

On his program this morning Thom Hartmann mentioned some off-the-record conversations he had had with Democratic congressional insiders regarding the possibility of impeachment just 100 days or so away from November’s general election.

These insiders told Hartmann that the Democrats would not push for impeachment so close to the election because, as has been said so many times before, “impeachment would suck all of the oxygen out of the room.”  Their belief is that the traditional media, with their deranged sense of “balance,” would apportion all of their coverage of any impeachment hearings to the “Democratic” side of the ledger, and grant the bulk of the remaining, “Republican,” side of the ledger to coverage of John McCain.

In other words, media coverage would consist of two things: John McCain, and impeachment.

I cannot think of a better way to win in a landslide this November than for exactly that to happen.  Let me explain:

I figure with everyone throwing around their picks for Obama’s currently vacant VP slot, I’d toss my name into the ring as well.

Not for Obama, though.

I believe that I and I alone possess the forbearance, proficiency, poise, and other impressive words to create the winning combination with Mr. McCain.

I’m also attracted to vast amounts of power, and I’m not afraid to use it.

A Labor Department that cheats labor

I’m at work, so this will be short, but the key paragraph is here:

According to two new reports by the Government Accountability Office (GAO), the Department of Labor’s Wage and Hour Division (WHD) allowed complaints of bosses not paying wages to millions of workers to go ignored. The WHD is responsible for enforcing the Fair Labor Standards Act (FLSA), the 1938 law that established the minimum wage and workers’ right to overtime pay.

A few weeks ago, NPK wrote an essay about the work of Dr. Erik Camayd-Freixas, a certified Spanish-language translator for the federal courts, to document his experience with the horrendous ICE raid in Postville, Iowa. I am happy to report that people are not letting this travesty pass without notice.

First of all, members of the Congressional Hispanic Caucus held a hearing about the raid last Saturday. Big props to Reps. Luis Gutierrez, D-Ill., Albio Sires, D-N.J., and Joe Baca, D-Calif. for your courage!!!!!

And on Sunday, an interfaith group of over 1,000 people representing Catholics, Jews and Lutherans held a rally and march in Postville to speak their minds and show their solidarity.

Obscenity: I know it when I see it.

Excluding an aftertax charge of $290 million related to an Exxon Valdez court settlement, earnings amounted to $11.97 billion, or $2.27 per share.

Did you catch that graphic?

Last year the Big Five oil corporations made 1.5 Trillion dollars. That was BEFORE this years spike to $4 a gallon. ($4.50 is a bargain, here in SF)

Holy Shit!….ooops I mean, BREAKING! US judge: White House aides can be subpoenaed

US judge: White House aides can be subpoenaed

WASHINGTON (AP) – A federal judge has sided with Congress in its fight with the Bush administration over whether top White House aides can be subpoenaed by Congress.

But President Bush says they are immune from such subpoenas. They say Congress can’t force them to testify.

U.S. District Judge John Bates said there’s no legal support for that stance. He refused to throw out the case and said the aides can be subpoenaed. 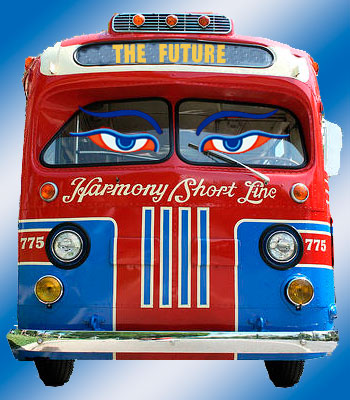 How Not to Fight Terrorism – The Rand Report

Rand Corporation has recently published a report which concludes that terrorist groups rarely cease to exist as a result of winning or losing a military campaign. To me it is mind-boggling that it took Rand, or anyone else, 8 years to come to this conclusion. Now the damage has been done. Hundreds of billions of dollars wasted, over a million lives lost, millions of people displaced, destruction of property and in the end we’ve only created more “terrorists” which in turn could be used as a pretext to continue the GWOT.

By analyzing a comprehensive roster of terrorist groups that existed worldwide between 1968 and 2006, the authors found that most groups ended because of operations carried out by local police or intelligence agencies or because they negotiated a settlement with their governments. Military force was rarely the primary reason a terrorist group ended, and few groups within this time frame achieved victory.

These findings suggest that the U.S. approach to countering al Qa’ida has focused far too much on the use of military force. Instead, policing and intelligence should be the backbone of U.S. efforts.