State of the Onion VI

I changed.  I am a changeling.

People change as they grow.  Changing some things, though, meets with social appropation.  In order to survive, one must have a base to stand firm upon.

I am and always will be a learner and teacher.  And I will do both to the best of my ability.  Some believed this should have been taken away from me, that I was no longer capable.  Why?  All changing meant was that I would have more to teach.

I will learn.  I will teach.  And I will live an examined life.

UXO – Still Killing After All These Years

A new cluster munitions treaty was adopted in Dublin, Ireland on May 30th. As per Human Rights Watch:

The treaty immediately bans all types of cluster munitions, rejecting initial attempts by some nations to negotiate exceptions for their own arsenals, as well as calls for a transition that would delay the ban for a decade or more.

In addition to the prohibitions on use, production, stockpiling, and trade, the treaty also includes very strong provisions requiring states to provide assistance to victims and to clean up areas affected by cluster munitions.

Human Rights Watch urged governments supporting the treaty to make all necessary preparations to sign the treaty in Oslo in December 2008. The treaty will go into effect after 30 nations have signed and ratified it.

The US and other countries which have used or stockpile cluster bombs were was absent from the negotiations. These include Russia, Israel, China, Brazil, India and Pakistan.

Dennis Kucinich: “There will be more.”

Today his 35 Articles of Impeachment against President Bush were referred to the House Judiciary Committee, where the conventional wisdom says they will languish without a hearing.

Kucinich said that if the Judiciary Committee does not act within 30 days, he intends to introduce another, longer version of the articles of impeachment, with 60 counts instead of 35.

George Washington said our hope of maintaining our precious freedom lies with making common cause around the constitution.  When Obama focuses on unity, he’s not just using a pretty word for effect.  He’s talking about what Washington called the Palladium of your political safety and prosperity.

Respect for its authority, compliance with its laws, acquiescence in its measures, are duties enjoined by the fundamental maxims of true Liberty. The basis of our political systems is the right of the people to make and to alter their Constitutions of Government. But the Constitution which at any time exists, till changed by an explicit and authentic act of the whole people, is sacredly obligatory upon all. The very idea of the power and the right of the people to establish Government presupposes the duty of every individual to obey the established Government.

Washington says one way can lose our freedom is to allow a faction to direct, control, counteract, or awe the constitutional deliberations of our government.  If we allow this, it can be fatal.  It replaces the voice of we the people with the self-interested will of one party, or group, or cabal, or sect.  If we allow a faction to take the reins of power from we the people, the situation is created so that in time, cunning, ambitious, and unprincipled men will take away the power of the people and hold the reins of government.  In the end, they will destroy the institutions, laws, and traditions of our constitutional government.

17 All obstructions to the execution of the Laws, all combinations and associations, under whatever plausible character, with the real design to direct, control, counteract, or awe the regular deliberation and action of the constituted authorities, are destructive of this fundamental principle, and of fatal tendency. They serve to organize faction, to give it an artificial and extraordinary force; to put, in the place of the delegated will of the nation, the will of a party, often a small but artful and enterprising minority of the community; and, according to the alternate triumphs of different parties, to make the public administration the mirror of the ill-concerted and incongruous projects of faction, rather than the organ of consistent and wholesome plans digested by common counsels, and modified by mutual interests.

18 However combinations or associations of the above description may now and then answer popular ends, they are likely, in the course of time and things, to become potent engines, by which cunning, ambitious, and unprincipled men will be enabled to subvert the power of the people, and to usurp for themselves the reins of government; destroying afterwards the very engines, which have lifted them to unjust dominion.

If we care to preserve the “engines” of our government, we will impeach George W. Bush.

Major Takes Own Life at Cemetery

Army Reserve Major Lance Waldorf passed away in Holly Township, Michigan, on Monday, 2008 June 02, from a self-inflicted gun shot wound.  He chose to take his own life in Great Lakes National Cemetery, leaving behind some photographs, a note, and his will.

From Inland, at the GOS, “I hope there’s an eternity where the Major is as happy as he was in that photo.”

Major Waldorf served in Ghazni, Afghanistan, as a part of the 414th Battalion, a unit from Southfield, Michigan.  More details can be found at source 1 and source 2 and source 3.

How we doing kids? The sexy beast has arrived! And I’m here to do what I do best…hijacking Buhdy’s writings with Discordian propeganda! BWAAAA HAAAA HAAAA!

Shithead Travels and Other Illuminati News

They should be arresting him rather than protecting him.

Commercial airlines can’t fly over Rome because shithead is there.  Feel free to send condolences to the people of Rome.

I haven’t been disappeared into a CIA torture chamber, if those of you concerned for my wellbeing have been wondering.  I started college again late last month, and it’s taken up a lot of my free time.  I’ll probably be doing my updates primarily on the weekends for a while.  Anyway, on to business.

Leave it to Paul Krugman to state what should have been obvious from the start:

Maybe I’m wrong, but my sense is that Jason Furman has become a proxy target for some Obama supporters who, now that the Great Satanness has been defeated, are suddenly starting to have the queasy feeling that their hero might be a bit of a …. centrist. I’m tempted to say I told you so; in fact, I guess I just did.

Although Krugman actually likes Furman, I think his remarks are — as usual — spot on.  The Obamamaniacs got the presidential candidate they wanted, but now that they’ve begun to realize they put their hopes in a fraud they’re getting nervous.  I would be too, if I suddenly realized I’d thrown my support behind another DLCer and in so doing, helped Democrats lose the White House again.

How to pet my cat / How NOT to pet my cat.  Link goes to a really cute illustration.   I like the warning for bad petting.

I love these beauties! 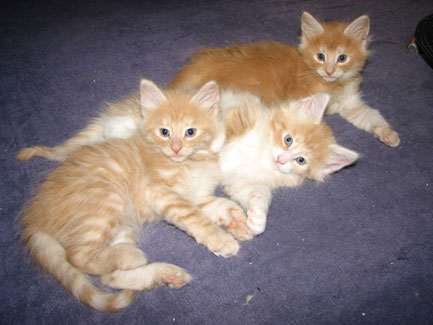