Every so often I find there is a series of stories which just aren’t likely to get their own diary…even though they very well may deserve one.  Time is a limited quantity after all and it’s about to become a much more limited quantity quickly, what with the new semester about to run us over.  Syllabi are due next Thursday and classes start the following week.

So you can think of this as a Friday trans news dump…stories with not enough lurid interest to grab bigger headlines given short shrift on a Friday evening…or you can think of it as the news from the transgender community on a reel.

This is the left’s equivalent of John Yoo.

On second thought left/right means nothing as the fascist New World Order takes shape.  Want to tell me how I should think now?  Fuck You.  One can only tread water in the cesspool for so long.  I came before the great American dumbed down generation so Fuck You and two middle fingers straight up.

Are you talking to me Mr. Sunstein?  You should be.  I note the omission of the now global 911 truth movement from the list of conspiracy theories.

I can’t help but think that this is designed simply to scare us.    Because, after all, we all know that they’re watching everything we do online anyway.    If they want to, they can read everything we post, every e-mail, every google search and there’s nothing we can do about it.

Or maybe they just want to make it easier for themselves.

Or maybe they just want to see how far they can push.


Kristina Clair, a 34-year old Linux administrator living in Philadelphia who provides free server space for Indymedia.us, said she was shocked to receive the Justice Department’s subpoena. (The Independent Media Center is a left-of-center amalgamation of journalists and advocates that – according to their principles of unity and mission statement – work toward “promoting social and economic justice” and “social change.”)

The subpoena (PDF) from U.S. Attorney Tim Morrison in Indianapolis demanded “all IP traffic to and from www.indymedia.us” on June 25, 2008. It instructed Clair to “include IP addresses, times, and any other identifying information,” including e-mail addresses, physical addresses, registered accounts, and Indymedia readers’ Social Security Numbers, bank account numbers, credit card numbers, and so on.

“I didn’t think anything we were doing was worthy of any (federal) attention,” Clair said in a telephone interview with CBSNews.com on Monday. After talking to other Indymedia volunteers, Clair ended up calling the Electronic Frontier Foundation in San Francisco, which represented her at no cost.

This is our new dictatorship.    When the government dictates to you regardless of what the majority of citizens thinks, or desires, or wishes, or votes, you live in an actual dictatorship.

Which is what we have now.   81% of Americans against the bailouts?   Doesn’t matter.    We are dictated to.    A clear majority support a public option?    Too bad.   We are dictated to otherwise.   Majority wants us out of Afganistan?   Same deal, it is dicatated to us that the war will continue, and not only continue but escalate.

Enjoy your televisions.    Watch the commercials we provide for you.    Consume.

These are Dangerous People!

The new “Reds under the Bed”, actually categorized as “domestic extremists”: 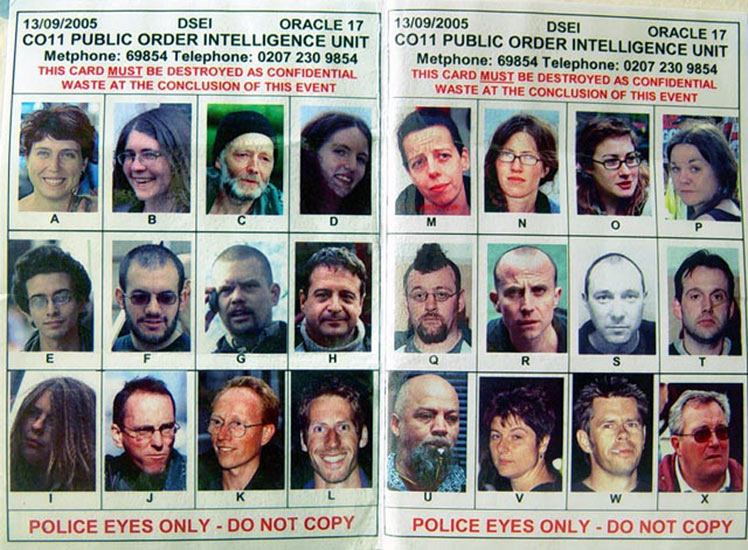 Don’t those people look scary to you?

They should.  They are ……. (looking around nervously, whispering) ……. “protesters!”

You know, people who are well informed enough to be angry.  And angry enough to step away from their TV’s and exercise their supposed (ha!) freedom to “Assemble” and “Speechify”.

It was a very sloppy policeman who dropped this “spotter card” at a protest in England.   Very sloppy.   These cards are NOT supposed to be seen by the dangerous public, you know, those people who actually employ and pay the police.   I’m sure if they catch this incompetent, he’ll be soundly punished, perhaps with some nice electrodes to his genitals.    We must ensure he never makes a similar mistake!

And I know, I know, this is in England, very far away from us, but you can bet if England is doing it, the United States is, too.   Been to any protests lately?   Seen all the cops with cameras?   There sure are a lot of them, and you can bet they’re not taking pictures for their Facebook pages.


This kind of highly confidential document – pictured above – is rarely seen by the public.

These so-called “spotter cards” are issued by police to identify individuals they consider to be potential troublemakers because they have appeared at a number of demonstrations.

The photographs are drawn from police intelligence files. This card was apparently dropped at a demonstration against Britain’s largest arms fair in 2005.

H is Mark Thomas, the comedian and political activist. Asked why it was justifiable to put Thomas, who has no criminal record, on this card, the Metropolitan police replied: “We do not discuss intelligence we may hold in relation to individuals.”

Thomas had been acquitted of criminal damage after attaching himself to a bus containing arms traders at a previous fair.

The Met said: “This is an appropriate tactic used by police to help them identify people at specific events … who may instigate offences or disorder.”

The arms fair “is a biannual event that is specifically targeted by known protest groups, who in the past have stated their intention was to shut down or disrupt the event.” As the cards are “strictly controlled”, the officers who lost it were “dealt with”.

On Comment is Free today Thomas writes: “Protesters – or, as the police call them, ‘domestic extremists’ – are the new ‘reds under the bed’.”

I’ve never heard of Mark Thomas, but I’m a fan now.   Here’s what else he said about this discovery:


I was sent the now notorious “police spotter card” through the post. It’s an official laminated card for “police eyes only” and labelled as coming from “CO11 Public Order Intelligence Unit”. The card contained the photographs of 24 anti-arms trade protesters, unnamed but lettered A to X. My picture appeared as photo H. You can imagine my reaction at finding I was the subject of a secret police surveillance process … I was delighted. I phoned my agent and told him I was suspect H. He replied: “Next year we’ll get you top billing … suspect A.”

The Metropolitan police circulated the card specifically for the Docklands biannual arms fair in London to help its officers identify “people at specific events who may instigate offences or disorder”. Which is such a flattering quote I am thinking of having it on my next tour poster. While being wanted outside the arms fair, I was legitimately inside researching a book on the subject, and uncovered four companies illegally promoting “banned” torture equipment. Questions were later asked in the Commons as to why HM Revenue & Customs and the police didn’t spot it. Though, in fairness, none of the torture traders featured on the spotter card.

What exactly was I doing that was so awfully wrong as to merit this attention? Today’s Guardian revelations of three secret police units goes some way to explain the targeting of protesters and raises worrying questions. The job of these units is to spy on protesters, and collate and circulate information about them. Protesters – or, as the police call them, “domestic extremists” – are the new “reds under the bed”.

Many of those targeted by the police have committed no crime and are guilty only of non-violent direct action. So it is worth reminding ourselves that protest is legal. Sorry if this sounds obvious, but you might have gained the impression that if three police units are spying on and targeting thousands, then those people must be up to something illegal.

The very phrase “domestic extremist” defines protesters in the eyes of the police as the problem, the enemy. Spying on entire groups and organisations, and targeting the innocent, undermines not only our rights but the law – frightfully silly of me to drag this into an argument about policing, I know.

Protest is part of the democratic process. It wasn’t the goodwill of politicians that led them to cancel developing countries’ debt, but the protests and campaigning of millions of ordinary people around the world. The political leaders were merely the rubber stamp in the democratic process. Thus any targeting and treatment of demonstrators (at the G20 for example) that creates a “chilling effect” – deterring those who may wish to exercise their right to protest – is profoundly undemocratic.

No police, secret or otherwise, should operate without proper accountability. So how are these three units accountable? Who has access to the databases? How long does information remain in the system? What effect could it have on travel and future employment of those targeted? How closely do these units work with corporate private investigators, and does the flow of information go both ways? Do the police target strikers?

A police spokesman has said that anyone who finds themselves on a database “should not worry at all”. When a spokesman for the three secret units will not disclose a breakdown of their budgets, and two of the three will not even name who heads their operations (even MI6 gave us an initial, for God’s sake), then the words “should not worry at all” are meaningless. Indeed, when the police admit that someone could end up on a secret police database merely for attending a demonstration, it is exactly the time to worry.

This is what we’re up against.

And I am reminded of this quote, which I happened to look up this morning for a response in another post here.   Many seem to have forgotten it especially those in charge:

Why have they forgotten or ignored this?

Last night, 2.03.09, the PBS News Hour had a preview of what could be an eye opening report on the National Security Agency that might just answer some of the many questions about what has been going on in the previous administration, and before, and may continue from now on!

This is what was on the News Hour: