As Lieberman deliberated, the new chair of the Democratic Senatorial Campaign Committee, Sen. Patty Murray (D-Wash.), told HuffPost that the party would consider supporting Lieberman if he returned to the fold.


The feeling of ill will is mutual: Lieberman said during the health care debate that one reason he opposed a Medicare buy-in compromise was that progressives were embracing it.

” What we are doing here is not only in the interest of the safety of the American people. Believe me, Saddam Hussein would have used these weapons against us eventually or given them to terrorists who would have. But what we are doing here, in overthrowing Saddam and removing those weapons of mass destruction and taking them into our control, is good for the security of people all over the world, including the Iraqi people themselves.”

Joe and John in Iraq

” It is time for us to take steps that make clear that if diplomatic and economic strategies continue to fail to change Iran’s nuclear policies, a military strike is not just a remote possibility in the abstract, but a real and credible alternative policy that we and our allies are ready to exercise.

It is time to retire our ambiguous mantra about all options remaining on the table. It is time for our message to our friends and enemies in the region to become clearer: namely, that we will prevent Iran from acquiring a nuclear weapons capability — by peaceful means if we possibly can, but with military force if we absolutely must. A military strike against Iran’s nuclear facilities entails risks and costs, but I am convinced that the risks and costs of allowing Iran to obtain a nuclear weapons capability are much greater.

Some have suggested that we should simply learn to live with a nuclear Iran and pledge to contain it. In my judgment, that would be a grave mistake. As one Arab leader I recently spoke with pointed out, how could anyone count on the United States to go to war to defend them against a nuclear-armed Iran, if we were unwilling to go to war to prevent a nuclear-armed Iran? Having tried and failed to stop Iran’s nuclear breakout, our country would be a poor position to contain its consequences.

I also believe it would be a failure of U.S. leadership if this situation reaches the point where the Israelis decide to attempt a unilateral strike on Iran. If military action must come, the United States is in the strongest position to confront Iran and manage the regional consequences. This is not a responsibility we should outsource. We can and should coordinate with our many allies who share our interest in stopping a nuclear Iran, but we cannot delegate our global responsibilities to them.” 
WASHINGTON (AP) — Attorney General Michael Mukasey and three other top Bush administration officials are weighing in against legislation that would allow reporters to protect the identities of confidential sources who provide sensitive, sometimes embarrassing information about the government.

The Free Flow of Information Act proposed by Sen. Arlen Specter, R-Pennsylvania, could harm national security and would encourage more leaks of classified information, the four officials wrote in letters to senators made public Thursday.

The legislation gives an overly broad definition of journalists that “can include those linked to terrorists and criminals,” wrote Mukasey and National Intelligence Director Mike McConnell.

“All individuals and entities who ‘gather’ or ‘publish’ information about ‘matters of public interest’ but who are not technically designated terrorist organizations, foreign powers or agents of a foreign power will be entitled to the bill’s protections,” Mukasey and McConnell stated.

Journalists, press freedom. How quaint. What an old fashioned idea.

Breaking: 30 laws, for the border fence

I see Magnifico caught this story in Four at Four, but tossing this post out there for depth’s sake.

We have to break the law in order to save it.

WASHINGTON – The Bush administration will use its authority to bypass more than 30 laws and regulations in an effort to finish building 670 miles of fence along the southwest U.S. border by the end of this year, federal officials said Tuesday.

Invoking the two legal waivers – which Congress authorized – will cut through bureaucratic red tape and sidestep environmental laws that currently stand in the way of the Homeland Security Department building 267 miles of fencing in California, Arizona, New Mexico and Texas, according to officials familiar with the plan. The officials spoke on condition of anonymity because they were not authorized to comment publicly about it.

Here we go again!  Only this time it’s not anthrax, it’s ricin!

Ricin has been found in a motel room in Las Vegas.

Feb. 29 (Bloomberg) — Seven people were hospitalized, one of them in a coma, after a substance believed to be the deadly toxin ricin was discovered yesterday in a Las Vegas hotel room. . . .

The FBI, which is cooperating with the inquiry, said there is no reason to suspect terrorism. Ricin is made from castor beans and has no antidote. Alternative uses include experimental cancer treatments. . . .

Federal officials have warned police departments to look out for ricin, which could be deadly in the hands of terrorists. It may be used to contaminate air-conditioning systems, drinking water or lakes, the FBI has said. . . .

Traces of ricin were also found five years ago in a London apartment during a British-based counterterrorism raid.

But not to worry!  Bush has already taken action!!!!!! 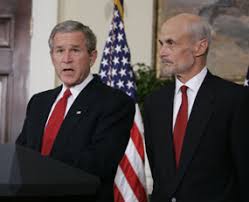 “Perhaps this might turn out to be a case of premature ejac… er… exaggeration,” stated President Bush in regards to the terror alert,” but we have been simply left with no alternative. I take my duties to protect America very seriously. It is possible that the substance in question might turn out not to be ricin, but without warrantless wiretapping thanks to the Democrat controlled Congress’ inability to pass a bipartisan measure, it may be too late to spread panic before we know for sure.”

Homeland security Director Michael Chertoff seconded the president’s concern. “The reality is that we are ramping up for more of these terror warning elevations, both justified and false alarms, because the truth of the matter is we just don’t know.”

Chertoff went on to say that Homeland security had swung into high gear, and would be investigating nationwide every level of America’s castor bean production, and was considering a national recall of castor oil. Tests later today would likely clarify the identity of the compound and possibly its origins, but Chertoff stated that this would come too late to amplify the necessary initial sense of panic needed.

“I think it’s very ironic that this incident surfaced in Nevada,” concluded Bush. “I hope it will send a message to Senator Reid and other like-minded individuals in Congress that the telephone companies must have immunity so that we’re able to know everything that’s going on in this country ahead of time.”

[See the website for the real picture shown — it is priceless.]

It’s the impressions from a picture thing again.  This man actually enjoys it, a reincarnation of a torture master out of the Spanish inquisition.  Some twist of Satanic fate leaves me with the distinct impression human suffering gives this man sexual gratification.

Most of the time the evil impressions only come the first time I see it.  Alberto Gonzales, John Yoo, Leo Strauss were among the evil minions.  This time I have seen his picture before yet this particular one emanates and evil more powerful than Gonzales.  I would like to think of it as a developing asset, a useful tool in sizing people up.  Preparation for the future crisis.

Hon. Chertoff?  No, like John Edwards, the psychic who talks to the dead, your eyes Sir are a mirror of your evil soul.