Making Magic In A Pandemic

END_OF_DOCUMENT_TOKEN_TO_BE_REPLACED

West Side Story (the 1961 film) in Portsmouth, New Hampshire:

Last Thursday afternoon, I made the scenic drive up from Somerville, MA to Portsmouth, NH, for yet another viewing of the film West Side Story, at the Cinemagic Stadium 10 Theatre, where they showed this particular film as this month’s part of their Cult Classic events.  Leaving Somerville at around 3 o’clock yesterday afternoon,  I …

END_OF_DOCUMENT_TOKEN_TO_BE_REPLACED

Memories of an Artistic Watering Hole

I have some fond memories to share. After reliving the experience of seeing The Dizzy Gillespie Dream Band, thoughts drummed up about another aspect of Lincoln Center. The nostalgia for a once famous bar that was across the street on 63rd and Amsterdam, a place where I once helped make the music and sang along for many years, came on strong.

Let me start out where Alvie Singer ended because it is a good way to set the stage. In the background during the final scene from Annie Hall you can see the concert hall where Dizzy Gillespie blew me away but in the foreground, the camera was set up in a bar and restaurant that was once called “O’Neals’ Baloon.”

The view is for you. I need no reminders of what O’Neils Balloon looked like and this in not a story about me.  Perhaps this is a story about a forgotten era that might just be making a comeback after of the success of the movie Black Swan. Well not really, more popularity and higher ticket prices can never take up the slack where the National Endowment for the Arts left off.

This is a story of a painting getting its act together and taking it on the road, a story of ballet at the barre and a recollection of times gone by. Just memories of a social gathering spot that was name “balloon” because it was illegal to call a bar a “saloon” in New York City. Those Blue Laws have been changed now. So much has changed now. So much has been forgotten.

Pony Party is an Open Thread.  Please not to rec the party!  & add your own favorite stuff in the comments!

To sit between the chairs, who doesn’t know that state? Here is one side, there the other. You can see both sides, you know them, maybe all too well, but you are not able, or rather: not willing to make up your mind. It is the classical dilemma, no matter which side you will choose, you will loose something, often times a person, that you will hurt, who will then feel betrayed. But you don’t want this and therefore you stay somewhere in the middle till, yes, till something happens and brings along the decision; sometimes you are involved actively, sometimes passively. It has evolved and the situation finds a resolution. But till that moment there is this strange state, you simply feel in between. – Minako Seki

Venue: On the Boards

A fire dance for camera filmed in Downtown Los Angeles created by Jeremy Hahn  in 2008.

(this wasn’t the version I had in mind. I can’t remember the artist. It was kinda mixed between this & this)


This is an Open Thread. Please don’t wRECk this pony  party

Maybe we’re not so different after all…………….

Have a wonderful evening! Be excellent to each other!

Have a lovely day! Be excellent to each other!

The floor is open.  Shall we dance? 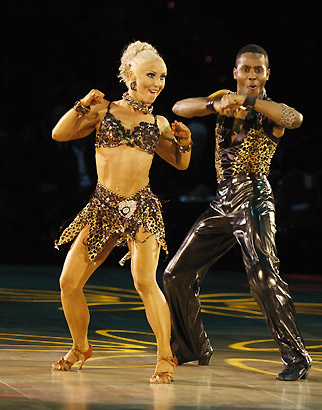 The mambo is a Cuban musical form and dance.  Mambo was the name of a Haitian Voodoo princess.  It means conversation with the gods. The first music called “mambo” was written in the late 1930s by a Cuban composer.  Instruments commonly used for mambo music are conga, cajon, bango, timbales, claves, upright bass, piano, trombone, trumpet and saxophone.

The mambo craze began in the late 1940s when a musician named Perez Prado came up with a dance to go with it.

Now for some modern mambo craze.  This is a fun song and the video rocks!

The Mambo Craze by De Phazz

Jamiroquai took the feel good seventies funk vibe and ran with it.  Last June they set up their own web site: http://www.jamiroquai.com/ with lots of funky stuff to check out.  On the top right they have some new songs to listen to.

I saw the Live in Montreaux concert on TV and was blown away.  Jay’s voice is very easy to listen to with incredible range and subtlety.  He’s fun to watch and makes you want to get up and dance too. It looks like they are just wrapping up a Japanese Tour.

Play (press play on the media box) or download Space Cowboy for free from Archive.org

Check out all the related links, clubs and fun things to do at Jam Party People.  Have a great weekend everyone!