Answer: When it’s a Republican former governor shilling for fracking. It takes a comedian to nail former Governor Tom Ridge (R-PA) trying to say he’s not a lobbyist and cover up the dangers of fracking.

Of course, that 90% claim was total hooey; it turns out that only 3% of Planned Parenthood’s work relates to abortions. (The Federal funding for abortions part is, too; the Hyde Amendment made such funding illegal decades ago.)

When confronted, Kyl’s office released a statement claiming the Senator’s comments were “not intended to be a factual statement”.

Sir Rev. Dr. Stephen T. Colbert, DFA, decided to have a bit of fun with Kyl, and he challenged his audience to Tweet their own “Not Intended To Be A Factual Statement” about Kyl.

I decided to compose a Tweet of my own…and then another…and before I knew it I had an entire story’s worth; that’s why, today, we’ll be taking a taking a short break from the daily grind to have a bit of fun with a man who truly deserves it: Jon Kyl.

#Not Intended To Be A Factual Statement

Stephen Colbert has had a grand time taking on Sen. Jon Kyl’s blatant lie on the Senate floor that Planned Parenthood is using 90% of its services for abortion, when it’s actually about 3%. Kyl’s spokes person tried walking back the lie but Stephen took it to Twitter creating this hash-tag, #NotIntendedToBeAFactualStatement

Christine O’Donnell has wiggled her nose and put a hex on the GOP establishment.  The novice Tea party candidate turned lots of heads, Linda Blair-like…But Karl Rove, the Warlock of W, has been taken aback by O’Donnell’s victory.  Even he thinks this girl is bat$#!+ crazy and that the Republicans have been given a Tea Party roofie. Earlier this summer McCain gave a widely panned speech in front of a green background.  Lime jello and cottage cheese became a running joke on the Interwebs.

Tuesday night (9/2/08) the winners were announced in this hilarious clip.

Take it from here Stephen… 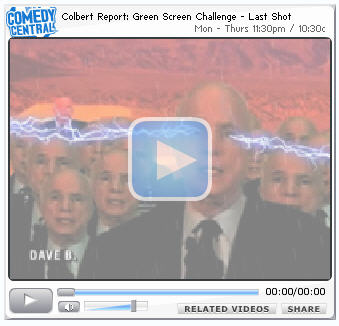 (urghh – I can’t get the embed to work here.

I linked the image to his site if you want to watch it there.  sorry!)

Pony Party: Colbert is back!

It’s not like I spend a lot of time watching TV to begin with, but during the WGA strike, I completely stopped watching two of my favorites: the Colbert Report and The Daily Show. For the first time in a long time,  I vegged and watched last night’s (2/13/08) Colbert Report.

These two interviews with SuperDelegates Gov. Eliot Spitzer (D-NY) and Rep. Eleanor Holmes Norton (D-DC) were very funny. It seems rare to find politicians with a sense of humor.

I imagine Spitzer is going to be president someday.   He really has the charisma and the brains.  As a New Yorker he is enthusiastically in support of Clinton.

Spitzer on The Colbert Report

In a not so shocking development, my favorite presidential candidate (other than you know who) is moving up in the polls.  With his brilliant one-state strategy, he is fast emerging as a political threat to the front-runners and according to the Washington Post, he’s got momentum

Public Opinion Strategies, a Republican polling firm, recently completed a national poll of 1,000 likely 2008 voters that included Colbert’s name in both the GOP and Democratic primaries. (He has announced his plans to run in both the Democratic and Republican primaries.)  In the field from Oct. 18-21, the survey has a 5 percent margin of error.

This is going to be a fairly short diary.

Television’s favorite political pundit, Jon Stewart, will continue his reign over at ‘The Daily Show’ at least until 2010

Stewart, whose contract was set to expire at the end of 2008, will now remain with the all-comedy network through 2010.  In addition to hosting “The Daily Show,” Stewart also serves as an executive producer and writer and is the principal behind Busboy Productions, Inc. with whom the network has a first look television agreement.

“I love doing this show.  I feel like I work with and for the best in the business.  I look forward to using this extension to having great fun at President Colbert’s expense.”

Stewart declined to say if future President Colbert had taken any positions regarding SCHIP or the Iraq War/Occupation.

Pony Party, Are you America??

Stephen Colbert is running for President.