Finally, the truth is out there. 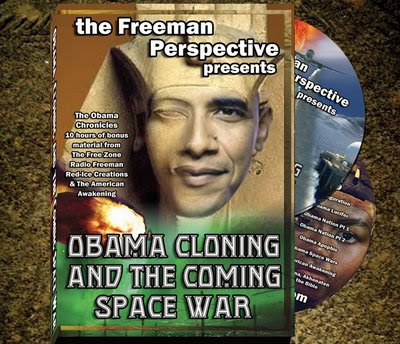 
Who is this man we call the President? Will he cause a Constitutional crisis? What’s hidden within his name and his statements? Is he the coming Anti-Christ predicted by Nostradamus? Are we witnessing the rise of the Fourth Reich? Or are things much stranger than we thought?

This 2 disk set includes a DVD of Freeman’s presentation, Obama, Cloning and the Coming Space War and a CD with 10 hours of Freeman’s radio interviews in MP3 format.

Explore revelations of Lucifer, occult rituals hidden as political speech, and the acceleration of the weaponization of space for a coming space war.

I heard Michael Bay is attached to film the sequel.