Rep. Grayson spanks everyone on CNN

Looking to women as agents of peace.

The 1976 Viking lander would have likely found water ice on Mars if it had probed just 4 inches deeper.

NASA’s Mars Reconnaissance Orbiter has revealed frozen water hiding just below the surface of mid-latitude Mars. The spacecraft’s observations were obtained from orbit after meteorites excavated fresh craters on the Red Planet.

Water ice, never seen before in Mars’ “temperate” zone, was discovered in a shallow crater that was made in 2008. The ice reveals that Mars was warmer and wetter in the relatively recent past.

The finds indicate water-ice occurs beneath Mars’ surface halfway between the north pole and the equator, a lower latitude than expected in the Martian climate.

This ice is a relic of a more humid climate from perhaps just several thousand years ago.

said Shane Byrne of the University of Arizona, Tucson.

Mars has large variations in its tilt that cause its climate to change even more strongly that the changes from glacial to interglacial on earth. However, Mars lost most of its atmosphere to space because Mars lacks the mass (size) to hold on to its upper atmosphere when it interacts with energetic particles in the solar wind. With only 1% of the atmospheric pressure of the earth, the Martian surface is uninhabitable to humans.

Venus is the opposite of Mars. Venus is massive enough to keep its atmosphere in interactions with the solar wind, but is glowing red hot at the surface with a predominantly CO2  atmosphere almost 100 times as dense as earth’s. At some point Venus got so hot that CO2 sequestered in carbonate minerals was released because calcium carbonate broke down. No one knows what triggered it but Venus turned from an earth like planet into a Hell Planet. 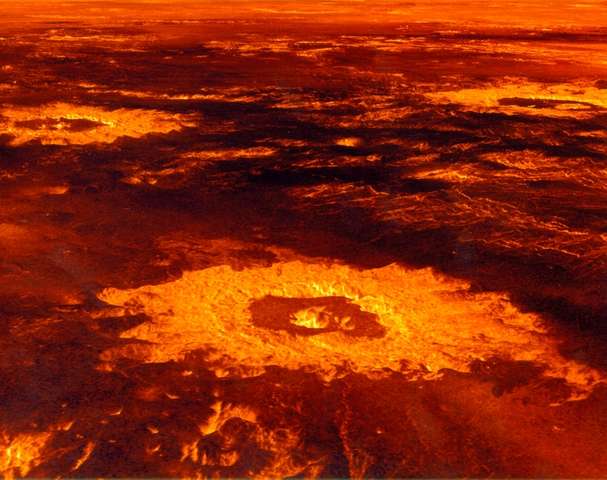 Venus has an extremely dense atmosphere, which consists mainly of carbon dioxide and a small amount of nitrogen. The atmospheric mass is 93 times that of Earth’s atmosphere while the pressure at the planet’s surface is about 92 times that at Earth’s surface-a pressure equivalent to that at a depth of nearly 1 kilometer under Earth’s oceans. The density at the surface is 65 kg/m³ (6.5% that of water). The CO2-rich atmosphere, along with thick clouds of sulfur dioxide, generates the strongest greenhouse effect in the Solar System, creating surface temperatures of over 460 °C (860 °F).[31] This makes Venus’s surface hotter than Mercury’s which has a minimum surface temperature of -220 °C and maximum surface temperature of 420 °C,[32] even though Venus is nearly twice Mercury’s distance from the Sun and thus receives only 25% of Mercury’s solar irradiance.

Studies have suggested that several billion years ago Venus’s atmosphere was much more like Earth’s than it is now, and that there were probably substantial quantities of liquid water on the surface, but a runaway greenhouse effect was caused by the evaporation of that original water, which generated a critical level of greenhouse gases in its atmosphere.[33]

Now (Released by the National Academy of Sciences on the internet today before publication) we are discovering that evolution and change on earth was stuck for a billion years when the mid and deep oceans turned into a sulfurous brew toxic to most forms of life. The early atmosphere was anoxic but supported the development of life. Photosyntesis began to generate oxygen  and carbon got sequestered by early plate tectonics, but oxygen did not build up in the atmosphere. Large amounts of reduced iron (+2 oxidation state) reacted with oxygen, creating banded iron formations at the bottom of seas. 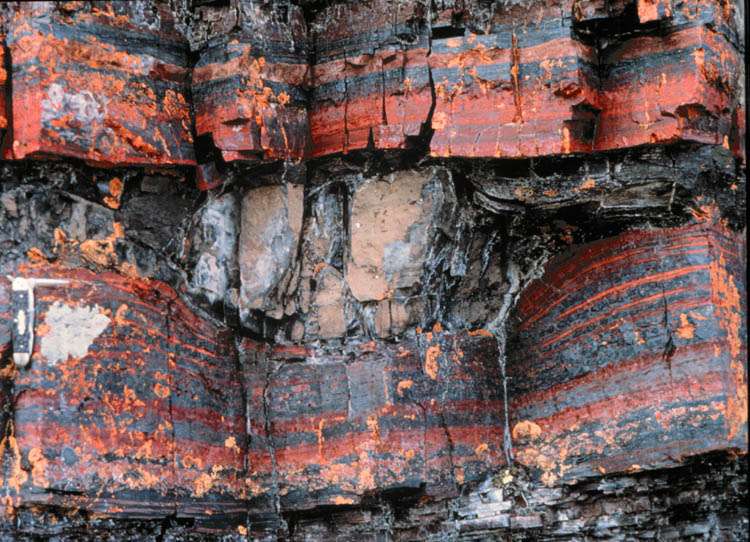 Eventually enough carbon was sequestered and enough oxygen was produced that iron was effectively removed from the oceans. However, when oxygen removed it left dissolved forms of sulfur in the oceans. Formation of pyrite, FeS2, under anoxic conditions tended to remove sulfur from the oceans before oxygen removed the reduced iron. After iron was removed, there was nothing to remove sulfur from the ocean. Early life had adapted to metabolizing sulfur, so sulfur metabolizers became established below a thin layer of slightly oxidized water in the upper ocean.(PDF +HTML)

In mid-Proterozoic oceans, lower PO2 and warmer temperatures (reducing O2 solubility) would have made sulfide much more available for anoxygenic photoautotrophy, enhancing their potential contribution to overall primary production. Increasing the relative proportion of anoxygenic photosynthesis would have decreased the direct link between OM burial and O2 generation (Fig. 1).

The anoxegenic cyanobacteria and purple and green bacteria that photosynthesized sulfate generated hydrogen sulfide gas which is toxic to most modern forms of life. Over one billion years of geologic time pyrite (FeS2) precipitation and sequestration in marine sediments removed enough sulfur so that the mid and lower oceans contained dissolved oxygen. Atmospheric oxygen then began to grow and the environment became more favorable for the development of complex multicellular life.

Later Neoproterozoic collapse of widespread euxinia and a concomitant return to ferruginous (anoxic and Fe2 rich) subsurface waters set in motion Earth’s transition from its prokaryote-dominated middle age, removing a physiological barrier to eukaryotic diversification (sulfide) and establishing, for the first time in Earth’s history, complete dominance of oxygenic photosynthesis in the oceans. This paved the way for the further oxygenation of the oceans and atmosphere and, ultimately, the evolution of complex multicellular organisms.

In future essays I will examine the issues related to modern changes in the chemistry of the oceans and atmosphere. Are we changing conditions in ways that favor organisms that survive in harsh environments? Will those organisms generate toxins that are hazardous to many other species of life?

Geologic and planetary records show that oceans and atmospheres can be stable for a billion years or more then undergo extreme change.