The Paramilitary Threat to American Democracy

Midnight Cowboying – Why you will never see the Apollo tapes 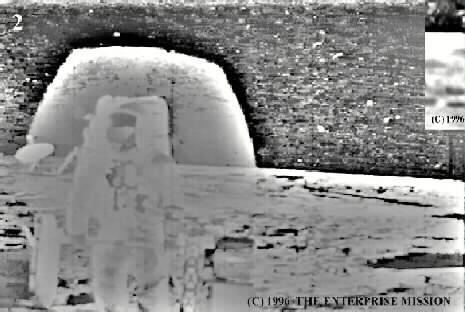 After a few calls into NASA, I finally broke down and went there. See, we jokingly call NASA the family business because we built the rockets and even the shuttles for America, but mostly for ourselves. We always thought we would have the first India Tea Company trading charter with aliens, making us richer than our wildest dreams and returning our once grand coat of arms to international importance. We also built them because we knew things we were never allowed to mention. This ends today.

After a meeting in a smoke-filled back room, I was told where the tapes were and I could see them in exchange for my advance lifter technology. Since NASA had already patented that against my consent, I decided there was no harm done in supplying the fractal sequences that drove the lifters. I even went the extra mile and showed them why certain fractals worked more efficiently within the gravitational-harmonics field, mostly out of fear someone might get hurt.

As their R&D team giddily ran off with my forbidden tech, a silver-templed member of the crew led me to back a room. Not only did they have the missing 698 tapes, they had them on HD. The only rule was I could never remove the missing movies from this underground bunker. After ordering an absurd amount of popcorn and Dr. Pepper, the old man sealed me in the undisclosed location and I settled in for about 200 hours of never before seen film.

After the first five tapes had flickered by, I realized why these tapes had become “lost”. As one gets closer to the dark side of the moon, certain structures and other odd anomalies start to grow in number. At first, I thought it was nothing more than a shadow trick, not unlike “the face” on Mars. But then I noticed one such structure, a wall leading to something if you will, could be seen on two different tapes. After getting another TV rolling for side by side viewing pleasure, I was quite certain of what I was seeing and where the wall was leading too.

As soon as I got out of the bunker, I found the old man who let me in and asked about the various domes on the moon. The old man mentioned how much my family had done for NASA, and how my second generation lifter designs had checked out in flying colors and how he would hate for something bad to happen to me now. Especially if I were to start talking about these domes.

I smiled, nodded and headed to my family’s Martha Base out in west Texas. What NASA didn’t know was that we also freelanced on rockets of our own design past the lights outside of town. In fact, the generation of lifter technology I had laid on them was far below what I had going on for my own personal use. For the record, I could have cashed in the X Prize years ago, as could have my uncles and grandfather before me. But since we planned on being inter-solar system traders, we always thought it was best to keep our designs a secret.

So after a quick systems check, I finally decided to risk a satellite and NORAD fly by to go see for myself what was on the moon. Besides some very surprised geese at about 8000 ft, getting off Terra was surprisingly simple and I kicked myself in the ass for not leaving before. With a week’s supply of oxygen, water and grub, I planned on surveying what appeared to be the most promising domes I had seen on the “missing” Apollo tapes. Taking only ten hours to get there, I wondered how long it would take before going to the moon would be the ultimate weekend get-a-way, and how long after that a cottage industry of bed and breakfasts would emerge.

Touch down was about as exciting as take off, and I made a mental note to thank a certain uncle for his reverse thruster design that allowed the ship to touch land like a feather. After a quick check of space suit and btu regulator, I opened the airlock and hit the Moon. Surprisingly, the air-filled moonwalks I enjoyed as a child resembled the actual moonwalk I was on now. Having a more trim suit than that of the astronauts my grandfather had sent all those years ago, I was able to actually jog.jump across the landscape, with Terra looming over the horizon. Euphoria can’t even describe what I was feeling.

I bounded effortless towards the dome I had decided offered the most promise. In all my glee, I had failed to notice something, something very odd and very bad.

My approach was being watched.

Deciding caution was better than valor, I tried to turn and start bounding.running the other direction only to realize “they” were there to now. I wondered if this was how Marco Polo felt on several occasions when he too pressed the envelope a trip to far. As they closed in, I began to realize why we didn’t go to the moon anymore.

Though I thought I was about to die, I was actually enjoying a cup of coffee with my new hosts, the Ejuickons, but they looked very disappointed to see me. They did seem pleased, however, I was not losing my mind trying to take in their advanced technology and their very different body forms, but inside I was freaking the fuck out. After being passed along like a hot potato, I got the feeling I was finally in the presence of someone of rank and some type of meeting was now to be held.

“What are you doing here?” said the Ejuickons, apparently in charge as I suspected.

“I wanted to see what was on the moon,” deciding honesty was definitely the best policy at this point.

“But we made an agreement, we traded, like the beads you gave to the Indians on Manhattan, to use a reference you said at the time. We gave you microprocessors, genetic engineering and nanobots, and you promised never to come to the moon again,” the Ejuickon said, as if I knew already. As if we all knew this on Terra.

“Mind if I politely go back? I did not know I trespassing.”

“Of course, but be advised that you must never return.”

Little did he know, I never planned on leaving Terra again, except maybe to Mars to die. But I did have to know one thing, so I turned and asked:

“Who did you trade with? So I know who got the beads, as you say.”

Ejuickon did something that I took as a smile, leaned back and hit a switch and I heard a voice I knew all to well.

“I did you stupid son of bitch, now get the hell off their moon.”

It was my grandfather on the screen, and he looked pissed as hell. He was also the only reason I was still alive.

2) All your base belongs to us

3) You were never suppose to see this