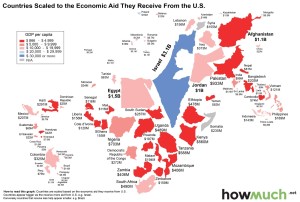 I’ve noticed over the years how Republicans like to complain about American foreign aid programs.  Yet, if you look at the map you’ll notice one very interesting fact: The top two recipients of American largess aren’t exactly poor countries and the next three Afghanistan. Jordan and Pakistan receive aid not to help their …

END_OF_DOCUMENT_TOKEN_TO_BE_REPLACED


In the interview, Hiss described how his doctors would mask the removal of corneas from bodies. “We’d glue the eyelid shut,” he said. “We wouldn’t take corneas from families we knew would open the eyelids.”,

I’m not one of those who buys into the “blowback” theories about terrorism, especially of the sophisticated Psyops events like 9/11.

However, people all around the world, especially in the Arab world, hate us, and they hate us for a lot of good reasons.

One of the biggest reasons they hate us is for our unequivocal support of the war criminal state of Israel.   It doesn’t matter how atrocious the atrocities committed, the U.S. goes out of its way to support anything Israel does.    That last attack in Gaza was particularly criminal and brazen, and our “esteemed” low-lives in our U.S. Congress decided to actually pass a resolution praising Israel’s crimes then.     The vote was 390 to 5.

But that’s just politics, right?   That’s just your basic warfare stuff, happens all the time, there will always be wars and rumors of war like the bible says, right?   Okay, sure.   You can set all that aside and just take a look at this:

For the first time, Israel has tacitly admitted stealing Palestinian body parts for transplant in Jewish patients, vindicating accusations leveled by Palestinians and rights groups over the past years.”We started to harvest corneas…whatever was done was highly informal. No permission was asked from the family,” pathologist Yehuda Hiss, the former head of the Abu Akbar  Center, also known as the L. Greenberg Institute for Forensic Medicine, told Nancy Sheppard-Hughes, now a professor of Anthropology at the University of California-Berkeley, in a documentary aired by the Israeli Channel Two.

The documentary revealed that in the 1990s, forensic specialists harvested corneas, heart valves and bones from the bodies of Israeli soldiers, Israeli citizens, Palestinians and foreign workers, often without permission from relatives.

Israel has also been accused of deliberately killing Palestinians in order to harvest their organs.


Other body parts believed to have been harvested from deceased Palestinians and others included heart arteries, bones and corneal tissues.

“The skins were taken from the bodies and transmitted to Hadasah hospital in West Jerusalem on the request of the Israeli army to be transplanted to wounded soldiers and in case of disaster,” said Hiss.

Hiss revealed that in the early 1990s, military surgeons began removing a thin layer of skin from bodies to treat burn victims, which he said was done without family consent.

Hughes reportedly decided to publish the interview, recorded in 2000 as part of her studies at the Israeli forensic institute, after a leading Swedish daily reported in August that Israeli soldiers killed Palestinians to trade in their organs.

A Swedish journalist revealed earlier this year that Israeli doctors at the Abu Akbar forensic institute had been harvesting organs from Palestinians killed by the Israeli army.

And this isn’t like a one-time thing.  Check this out:


When Avraham’s brother asked to see the body, the hospital refused. However, he insisted and the doctors finally gave in. The body was completely covered in bandages, “which didn’t jive with a stroke, so he unwrapped the bandages, and was shocked to see the upper body empty: Instead of internal organs, there were bandages that had been stuffed inside to fill the space,” Ofra said.

“They treated him like an alley cat,” she said tearfully. “From the moment he entered the hospital, they apparently saw him only as a potential source of organs and not as a man in need of treatment. They only thought about how to do the deed without us knowing.”

It took a few hours before the family connected the state of the body with the historic transplant. Then, they began asking questions – but the hospital insisted that Sadegat’s heart had not been used.

The family then applied to three cabinet ministers, demanding to know why the heart had been taken without their consent. They did not ask for compensation; they simply wanted to know the truth.

The affair aroused a media storm, but the hospital continued to stick to its denial. Only weeks later did it finally give in and admit that Sadegat’s heart had been used. But it made this admission only after the family signed a document promising not to sue.

And then, of course, there are little things like this: