TEXAS CITY, TEXAS — Two weeks before the blowout in the Gulf of Mexico, the huge, trouble-plagued BP refinery in this coastal town spewed tens of thousands of pounds of toxic chemicals into the skies.

The release from the BP facility here began April 6 and lasted 40 days. It stemmed from the company’s decision to keep producing and selling gasoline while it attempted repairs on a key piece of equipment, according to BP officials and Texas regulators.

BP says it failed to detect the extent of the emissions for several weeks. It discovered the scope of the problem only after analyzing data from a monitor that measures emissions from a flare 300 feet above the ground that was supposed to incinerate the toxic chemicals.

The company now estimates that 538,000 pounds of chemicals escaped from the refinery while it was replacing the equipment. These included 17,000 pounds of benzene, a known carcinogen; 36,000 pounds of nitrogen oxides, which contribute to respiratory problems; and 189,000 pounds of carbon monoxide.

I did Google image searches for “Lead & Toys” and “Recalled & Toys”. More than 400,000 images were found. I didn’t search on “Date Rape Drug” and “toys”, but you know that would have some hits as well. The collage below contains a few of the images I found in my search that I selected for this short rant. Nothing I have to say in it is particularly new, but I feel better now that I have written it. I’m a parent of 3 children, and the thought that the toys I buy for my kids or my siblings’ children would somehow poison them scares the hell out of me. It makes me angry, too, to know that my government is complicit in endangering our children. 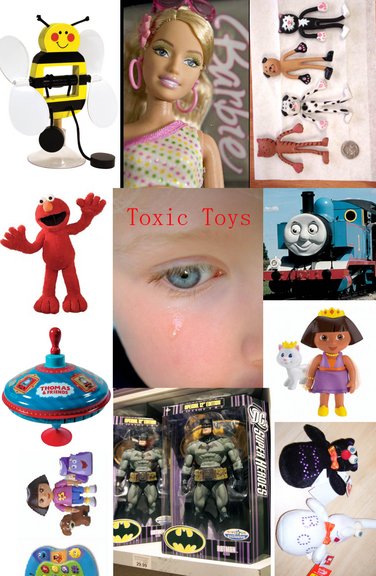