Last Thursday, John McCarron in an op-ed at the Chicago Tribune used the excuse of “skepticism” to trot out slopping thinking and laziness about digging up facts, in Slow down those fast-train dreams

Among many “God, I want to file a bug report” passages in a fairly short piece is:

The purpose of high-speed rail, near as I can tell, is not to ease the daily commute of millions of Chicagoans — we’ll still clank along on what is, in many places, a century-old system — but to rocket a much smaller group of occasional travelers to places like St. Louis, Detroit and Minneapolis at speeds approaching 220 m.p.h. Two hours to St. Louis! All we’ll need is a reason to go there.

So, (1) McCarron frames local transport and regional transport as either/or tasks … we either do one or we do the other. Unlike any other time in our nation’s history, we are unable to address both.

And (2) McCarron likes his opinions unadulturated by fact. The 220mph Express HSR project is in California. The actual projects that the states of Illinois, Missouri, Michigan, Indiana and Ohio are requesting funding for are in the “Emerging HSR” tier of HSR … trains running at 110mph.

crossposted from Daily Kos … comments there after the “recent diary list” deadline has passed are also welcome.

Bonddad has YERRD (yet another reclisted Rosenberg diary) up, on the issue of whether the recession is coming to an end, or the sky is falling and we face an unending recession from now through to the visible horizon.

But the Great Depression was not made of a recession that did not end for ten years. It was, indeed, made up of one and a half complete business cycles … the post-Crash Recession, from late 1929 to 1932, the New Deal Recovery, from 1932 to 1937, the Roosevelt Recession of 1937/38, and then the recovery that merged with the start of WWII, which was the government spending program substantial enough to actually bring us back to a full employment macro equilibrium.

So the question of whether or not we face another Depression is not, “will this Recession ever end?” … but rather, “After this recession, what comes next?”

So over the fold, I turn to that, far more urgent, question.

But first, an Action Note: Transportation for America reminds us that its not too late to tell your Congressmen to increase support for clean transportation. 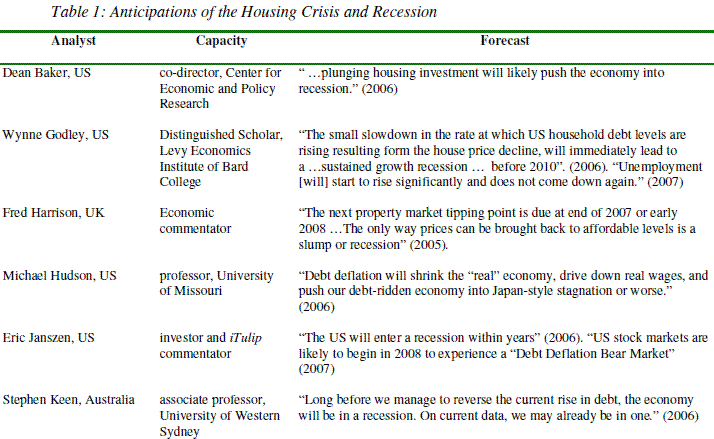 The Bad News and the Worse News on Unemployment.

The April employment numbers are out. The Broad Based (U6) unemployment figures … the best measure of the “total people available to take on more work” … give, on the one hand, bad news, and on the other hand, worse news. This is, of course, treated as “good news”, because the expectation was that it would be on the one hand worse news and on the other hand catastrophic news.

This is not the “headline” rate, or U3, which takes everyone working any hours at all as “employed”, even if they want more work, and anyone who has not actively sought work in the last four weeks is dropped out altogether.

Instead, its the “broad” or “U6” rate, where those who express an interest in working who have looked for work in the past year are included, as well as those who are “involuntary part-time” employees. So the U6 series is the best measure of the “total people available to take on more work”.

Also note that BLS unemployment statistics are not determined by the numbers of people drawing unemployment … it includes a broad range of data sources, including an ongoing telephone survey.

In terms of changes in the “U6” unemployment rate, this is:

The bad news is, of course broad based unemployment is still rising. The worse news is that it is more than halfway to the “depths of the Great Depression” benchmark of around 1 in 4 out of work.

Even more, the populace has been trained to accept as “normal” unemployment rates what would have been considered an economic emergency back in the 1960’s.