The Arrest of Dominique Strauss-Kahn

The rape allegations against Strauss-Kahn, seemed pretty cut and dried at first. Personally, I was even enjoying (to an extent)  a prominent person  in the IMF being brought down so low. 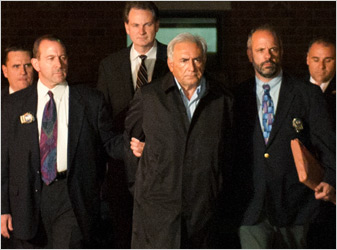 I mean it could be a still right out of Law And Order, right?

But then I found out about how this will likely turn France’s next election to the far right, & I got to thinking about the allegations attempting to bring down Assange, which are totally nonsense & a setup, and  even the (true) allegations against the former governor of NY having sex (not rape) with a prostitute.

And then I read this:

Well before Mr. Strauss-Kahn’s arrest there had been reports that Mr. Sarkozy was gathering information to discredit Mr. Strauss-Kahn should he run for president. In a famous incident, reported by the news magazine Le Point, Mr. Strauss-Kahn confronted Mr. Sarkozy in the men’s room at the Group of 20 summit meeting in Pittsburgh in September 2009, saying: “I’ve had more than enough of this continued gossip about my private life and about supposed dossiers and photos that could come out against me. I know that this is coming from the Élysée. Tell your guys to stop or I’ll go to the courts.”

Before this, the Times had all sorts of innuendo in there about Strauss-Kahn’s dealing’s with women, none verifiable, and much more to the point — true or not, none that amounted to rape.

Now, I have no idea what happened in that hotel room, but it certainly is bizarre– I mean a guy that could be the next president of France, and who already knows that Sarkozy / right wing is after him using sexual innuendo,  rapes an African immigrant maid in New York?  And then runs to the airport– leaving his phone behind.

Who knows for sure.

But, I think we should be very wary of the right wing finding / setting up ways of using our innate wish to champion women, blacks-any underdog really, against , well whoever they want to.