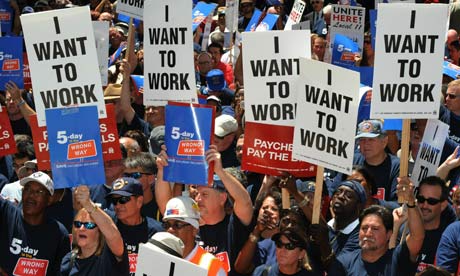 And the recent extension of unemployment benefits does not help the 99ers.

This bill will not add any additional weeks of benefits for people who have already exhausted their unemployment, a group of people sometimes called the “99ers” because they have already collected 99 weeks of unemployment insurance.

Faced with this dismal picture, why is Washington’s response so feeble?

We’re told that we can’t afford to help the unemployed – that we must get budget deficits down immediately or the “bond vigilantes” will send U.S. borrowing costs sky-high. Some of us have tried to point out that those bond vigilantes are, as far as anyone can tell, figments of the deficit hawks’ imagination – far from fleeing U.S. debt, investors have been buying it eagerly, driving interest rates to historic lows.

So it’s cheaper to run a deficit now than it ever has been, and more Americans are in desperate financial trouble than at any time since the Great Depression, but what do we hear from the Democratic Congressional leadership?

More than ever, Americans understand the danger of debt: a stagnant economy, a hobbled government, and a weak national defense.

It isn’t possible to debate and pass a realistic, long-term budget until we’ve considered the bipartisan commission’s deficit-reduction plan, which is expected in December.

The only help in sight or even in prospect is Senator Debbie Stabenow’s Americans Want to Work Act, which would provide an additional 20 weeks of unemployment insurance for 99ers, but only in states like Michigan with an unemployment rate of 7.5% or higher, and there isn’t much chance that this bill will even be debated before the end of the year.

It appears that after taking a long break, the Senate’s legislative agenda on September 13 will not include deliberations on a Tier 5 unemployment extension bill for 99ers.

Senator Debbie Stabenow’s Tier 5 “Americans Want To Work Act” is not tabled for discussion during the Senate’s first session on September 13 after going on recess a week ago according to OpenCongress.org.

And in the meantime hundreds of thousands of Americans like Alexandra Jarrin will descend into homelessness and destitution.

When interviewed by the New York Times, she was living in a motel in Brattleboro, Vermont, having paid $260 she managed to scrape together from friends and from selling her living-room furniture – enough for a week-long stay.

Her vehicle is now on the verge of being repossessed. Jarrin has contacted her local shelter, but was told there was a waiting list. “Barring a miracle, I’m going to be [sleeping] in my car,” she said.