Why seize a basement? The thing is, Kimball, housed NYU’s print shop-a a sizeable operation for a school with a student body in the five figures, and a huge potential resource for the movement. It might have been grabbed earlier, but was certainly in our hands by May 5. I hate having to do this, but a word for the youngsters who spent last semester working at Kinko’s. Before xeroxing, inkjet printers, and digital print solutions like Duplo DC-516 Cutter Creaser, printing was a complicated, arduous, very dirty, sometimes dangerous job. It required a whole mess of steps and many hours between typing your flier and getting a couple thousand of them to hand out.

Kimball became a political center for the student strike not just at NYU or even the city, but the country as a whole. The credit for that goes to the NYUers who wisely called in a small but respected printing collective called the WIMPs. That stood for Workers In Movement Printing, a name taken the year before when the old SDS regional office in New York and its printing equipment had been seized from the Weathermen. The Weather folks denounced those who booted them in a well-executed midnight raid as “wimps” (but somehow never managed to take the print shop back).

The WIMPs, a core of about 10, brought with them not only artistic, layout and mechanical skills but a valuable political outlook honed by members’ participation in various struggles through the ’60s. Notable was their non-sectarian approach. They would take on printing jobs for anybody generally within the camp of the forces of sweetness and light. For instance, there was this new-fangled Gay Liberation stuff that sprang up in the wake of the Stonewall Rebellion the previous fall. While today it is easy to find a company that specializes in cheap poster printing in London, for example, at the time some printshops were particular about what they would print. Many mainline and lefty printshops were less than welcoming when these folks came around. Not the WIMPs, who printed practically every important flier, pamphlet and poster in those heady first months.

So as soon as they moved into what would be their home for many days to come, Kimball Hall, the WIMPs and NYU occupiers did two things. They started printing fliers and posters for the strike, and they started meeting about how the print shop was to be run and how it could be kept secure from administration efforts to get their communication center and hundreds of thousands of dollars worth of equipment back. 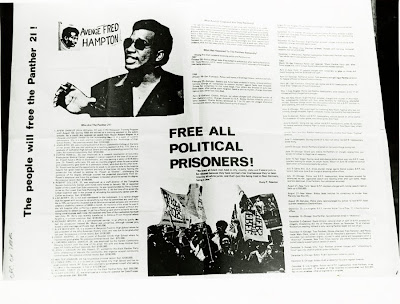 As opposed to setting up a heavy security system, the collective decided the best security was to open the print shop up widely to anyone who wanted to come in and print stuff for the strike. It worked great.

I remember being there once in the first days when an artist strolled in with some drawings he had done for posters-this was a common occurrence. Somebody present griped a little because one of the designs showed four small coffins hanging off the ends of rifles being aimed by troops in formation: this was too pessimistic, defeatist, something like that. The critic was quickly reminded of the collective’s openness principle.

Folks showed the artist how to blow up his (I recall it was a guy, but can’t swear to it) artwork, and to help make a negative, burn and clean up a plate for the printing press. While it was all in process, including the drying of the posters, he was encouraged to think about how these posters were going to get around and instructed in the fine points of wheatpasting.

The crew I brought down from Taft High School in the Bronx to put out the new issue of their underground paper Rip Off (which in the spirit of The Black Panther used pictures of guns to fill blank spaces and divide articles) were accorded the same respect and help as someone from a university strike committee with a call to a major demonstration.

This approach made the Kimball printshop a major clearing house for strike information and culture. If someone was leaving NYC for, say, Kentucky, they’d stop by and pick up a bunch of fliers or pamphlets and a roll of posters on their way out of town. And some of the folks who came in from the campus or the street stayed and became part of the Kimball crew. 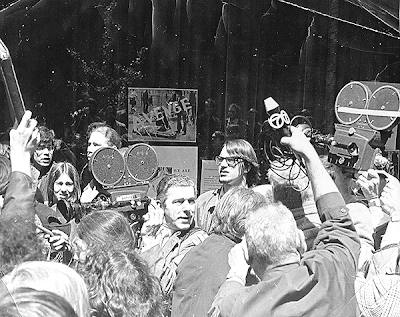 The WIMPs didn’t just print for others, but produced their own art and propaganda. Lee, I believe, was the one who took the famous picture of Mary Anne Vecchio kneeling over the body of Jeffrey Miller and blew it up, all grainy, with the word “AVENGE” in runny letters across it. Thousands of these posters went out of Kimball and were slapped up on walls across New York and around the country.

We used every sheet of paper, every can of ink in the place. One lovely touch was the writing of a carefully-composed letter soliciting donations for bail for the Panther 21. It was printed on NYU stationary, with President James Hester’s signature attached, machine-stuffed in NYU envelopes, run through the on the address-o-graph with the NYU alumni list loaded and stamped in the NYU postage meter. We were told that a couple of thousand bucks actually came in to the Panther defense office!

With the supplies exhausted, and the crew as well, the WIMPs and others who had made sure the place was staffed and running 24/7 for over a week left. NYU had threatened but never made a real bid to evict them by force, a product of the administration decision to get the kids off campus and let the strike wind down on its own–and of the open and inclusive policy that meant that the whole movement saw Kimball as liberated territory, our territory, and were ready to defend it, if push had come to shove…Here is the rest of the post. It will remain hidden until someone clicks the Read More link.