Greece: A Massive Transfer Of Wealth to German Banks

Yves Smith: Yes, it is inevitable. The Greek austerity program is the most daunting in modern times. Argentina defaulted under a much less demanding program. The Greek population also appears to understand intuitively the record of Latin American austerity programs, that they are a transfer from the public to the banks, and they do not appear willing to make the depth of sacrifice demanded of them. Many experts believe the euro zone is wasting valuable firepower and credibility on Greece, when it would have done better to restructure Greece now and use any backstop funds for the other euro zone members under stress.

….Unless a country can engineer a very large increase in exports, which usually happens by depreciating its currency, trying to reduce public- and private-sector debt at the same time results in a big economic contraction. That’s happening now in Ireland, where nominal G.D.P. has fallen over 18 percent. A fall of that magnitude makes it even harder to pay off existing debt.

So, France and Germany are basically paying Greece to pay  their own banks. And contracting the Greek (and soon all of southern Europe) economy.  Remember that one of the conditions Germany placed on bailing out their own auto industry, was that the jobs created/saved would be in Germany-not in Spain or somewhere else. Likewise, their various stimulus packages were local as well. But now they’ve forced Greece to cut jobs, cut entitlements and retirement benefits, and raise taxes.

And of course this:


…Papandreou had recently met Sarkozy and French Prime Minister Francois Fillon in Paris. “Mr Fillon and Mr Sarkozy told Mr Papandreou: ‘We’re going to raise the money to help you, but you are going to have to continue to pay the arms contracts that we have with you’,” Cohn-Bendit said.

“In the past three months we have forced Greece to confirm several billion dollars in arms contracts. French frigates that the Greeks will have to buy for 2.5 billion euros. Helicopters, planes, German submarines.”

The Portuguese have been forced into the “Austerity Plan” as well.

Exceptional measures taken last year to offset the impact of the economic slowdown, most notably on unemployment and jobs for the young, will also be scrapped, Teixeira dos Santos added.

Privatisation should bring in an additional six billion euros, with the assets involved to be announced on March 25, he said.

Privatization? What a surprise.  And, yes, the Portuguese have a socialist government being forced into this as well.

Next up? Spain, Italy and maybe Ireland. Spain is assured now, because Portugal owes it so much, and the ‘austerity’ will surely kill their economy.

So, who does Greece owe? 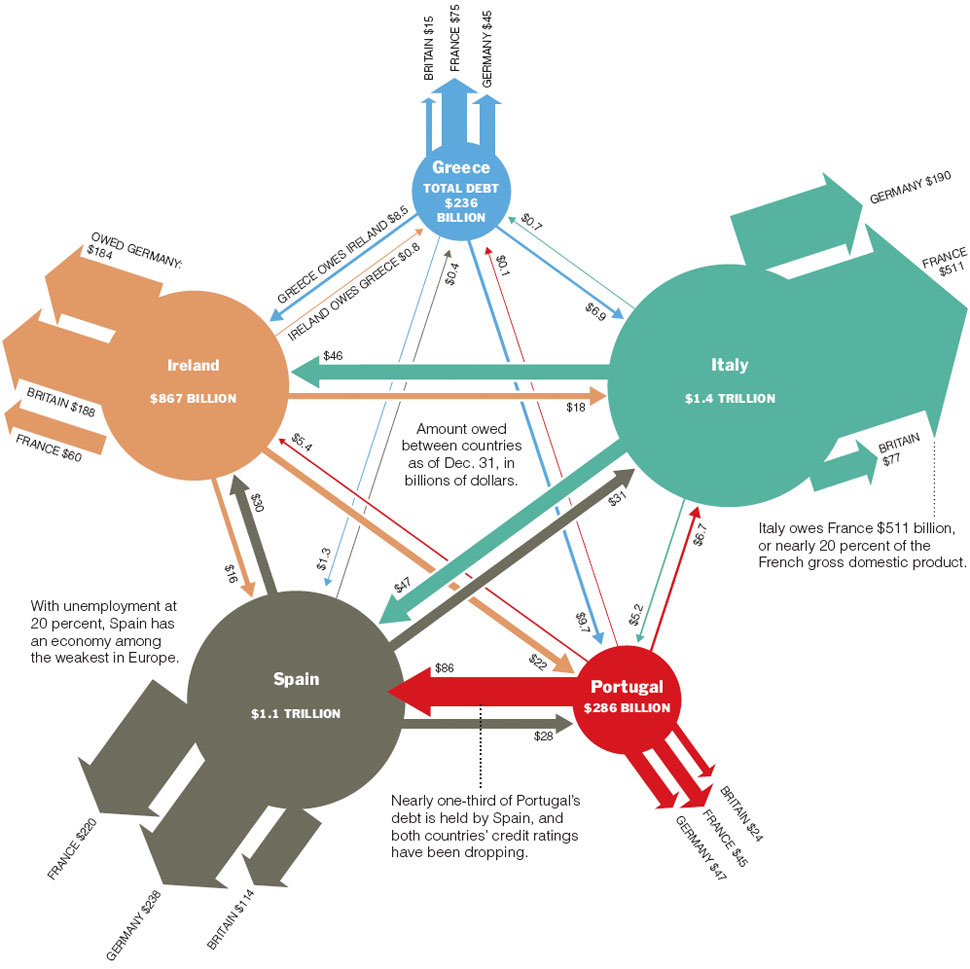