Mothers and Soldiers: Healing the bonds destroyed by war

Well, I’ll let the article just speak for itself:


WASHINGTON – Top executives at Blackwater Worldwide authorized secret payments of about $1 million to Iraqi officials that were intended to silence their criticism and buy their support after a September 2007 episode in which Blackwater security guards fatally shot 17 Iraqi civilians in Baghdad, according to former company officials.

Why is this coming out now?


Blackwater’s strategy of buying off the government officials, which would have been illegal under American law, created a deep rift inside the company, according to the former executives. They said that Cofer Black, who was then the company’s vice chairman and a former top C.I.A. and State Department official, learned of the plan from another Blackwater manager while he was in Baghdad discussing compensation for families of the shooting victims with United States Embassy officials.

Yeah, right, Cofer’s just a real nice guy, I’m sure his concerns were all about “doing the right thing”.   Or maybe it was more like “staying out of jail”.

What a bunch of sleazebags: 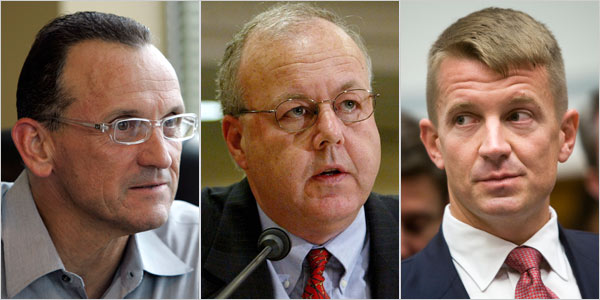 Doesn’t Cofer, there in the middle, look like the runner-up in a Karl Rove impersonation contest?   And how about that Gary Jackson (on the left)?   Looks like your basic sleazebag wiseguy, which, hell, is all he really is.    And here’s how he talks:


Reached by phone, Mr. Jackson, who resigned as president of Blackwater early this year, criticized The New York Times and said, “I don’t care what you write.”

Gee, why doesn’t that surprise me?

Whoa, just went over to Jeremy Scahill’s site to grab some links (he’s been all over the Blackwater case) and he’s already on it:

His article is (expectedly) far better than the NY Times:

While the Times reports that it is unclear if the bribes were paid and if so to whom, this much is clear: Blackwater continued to operate in Iraq for a full two years after the Iraqis announced the company would be banned–a fact that has baffled and angered Iraqis. While the company eventually lost its large State Department security contract to a competitor in May 2009, Blackwater remains in Iraq on a $200 million aviation contract, which authorizes its men to be armed. That contract was recently extended by the Obama administration.

At present, Blackwater works in Afghanistan for the State Department, the CIA and the Defense Department. It continues to protect US officials there and guards visiting Congressional delegations. Rep. Jan Schakowsky told The Nation she was guarded by Blackwater on a recent trip to Afghanistan and that the company is involved with the security details of Secretary of State Hillary Clinton and Ambassador Richard Holbrooke when they visit the country.

Now, this is infuriating, because the NY Times pieces totally plays down the extent to which Blackwater continues to operate in Iraq and elsewhere.   Can you believe this shit?


The State Department replaced Blackwater with a rival in May, but the company still does some work for the department in Iraq on a temporary basis.

That’s the NY Times for you.   Thanks, Liberal Media!   Fucking lie to us again!   Okay, it’s not really a lie, they say “some work”.   Yeah, “some work” could be ANYTHING.   And they say “on a temporary basis”.    Okay, well my fucking LIFE is temporary, that doesn’t mean it’s not long-term (has been so far).

I hate the media.   And for good reason.

Also, the New York Lies decided to completely omit the effect that the bribes had:


Not long after the Iraqi government announced in September 2007 that Blackwater would be banned, top Iraqi officials swiftly changed their tune about the company and began to publicly state that without Blackwater there would be a security crisis for US officials. After the incident, Iraqi Prime Minister Nouri al-Maliki quickly found himself under heavy US pressure to back off his initial demands of expulsion and prosecution. While Secretary of State Condoleezza Rice immediately called the Iraqi prime minister to apologize, she made a point of emphasizing publicly that “we need protection for our diplomats.” A few days later, Tahseen Sheikhly, a representative of Maliki’s government, stated, “If we drive out this company immediately, there will be a security vacuum…That would cause a big imbalance in the security situation.” In a telling 180 degree turn, Maliki swiftly agreed to withhold judgment on Blackwater’s status, pending the conclusion of a “joint” US-Iraqi investigation. Ultimately five Blackwater operatives were indicted in a US court on federal manslaughter charges stemming from the Nisour Square shootings, while a sixth pled guilty.

Pure corruption.   Now involving Condie Lice.    Backing up the crooks all the way.   She needs to be put in jail.   Where is she, anyway, what fat salary is she pulling down now because of her chicanery?

There’s a lot more in Scahill’s piece, I highly recommend it.   He’s Da Man on Blackwater, he’s had his nose in their pants for a while.