A Way of Seeing (Weekend Anthropology) 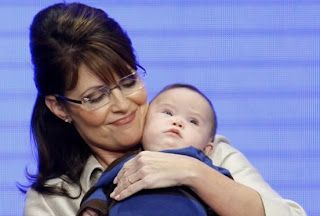 Queen of Quitters, Mother of Sluts and Damaged Babies, Idol of Neo-Nazis

With the increasingly vicious invasions of health care town halls by angry lynch mobs of vile, racist, neo-Nazi filth offering an eerie glimpse of the coming ugly fall of Weimar America when the rapidly approaching hyperinflation turns us all into Germans circa 1933 you have to not be a bit surprised when the future Führess , Sarah Palin weighs in. Fresh off of her quitting as Alaska Governor and her rambling descent into Glenn Beck type of insanity with her bizarre resignation speech the vile harlot is now joining the rest of the brownshirts in attacking the Obama health care reform push. Palin goes back to the bread and butter exploitation of her mongoloid demon child that made her the darling of peckerwood nation in trotting out favorite prop Baby Trig one more time.

In going with the standard right-wing nutball talking point that has riled up all of those old folks on socialized medical programs that the gubmint is coming to ‘KILL GRANNY’ the white trash witch of Wasila is calling out Obama’s ‘Death Panel’ that once all of the geezers have been euthanized they will be coming for the retards next…like precious little Baby Trig. What is so troubling about the dead enders who embrace the rabid form of authoritarianism in storming town halls with SA like fury is that they are so easily suckered by this swill. Rush the child fucking drug addict is invoking the Nazi card as are insipid dipshits like the foul excretion belched out from the womb of Lucianne Goldberg, Jonah, the yuppie yutz who actually wrote a book called, get this…Liberal Fascism to fire up the knuckle draggers. Now anyone with any true sense of history and this of course excludes the ‘tea baggers’ who are essentially out making assholes of themselves in support of the contemporary version of the British Monarchy would immediately know that Hitler’s National Socialism had not one fucking commonality with actual socialism itself. In fact the Nazis hated the communists, trade unions and socialists to the extent that they were largely able to rise to power with the full backing of rapacious German corporations for driving down labor costs by killing and imprisoning socialists.

But as the saying goes, never waste your time trying to teach a pig to sing, it wastes your time and annoys the hell out of the pig therefore any rational thought process is so devoid of the teabaggers, birthers and assorted other scum that even attempting to educate them is an exercise in futility that makes Sisyphus look like a champ. Now I occasionally try to talk to some of them that aren’t too far gone, you may never convince them of the truth but my mission is to keep them from being sucked in by the Glenn Beck death cultists that have so successfully co-opted the Ron Paul movement. I must offer up my mea culpas now to those who thought my admiration of that bunch was foolhardy, now in retrospect, my optimism that an actual movement that no matter how misguided could actually challenge imperialism and the temple of the money changers aka the monolithic Federal Reserve was futile and silly. The type of pathetically naive folks who gravitated to that were very easily peeled off and turned into a raging army of idiots by the corporate funded protection racket that is hate TV and hate radio, now they have been led like sheep to go forth and be assimilated into the real Nazi fifth column that has been working like hell for decades to destabilize this country from within, very successfully I might add.

What these poor, dumb schmucks fail to understand is that Hitler took away the guns, hid behind God to dupe the flock and ultimately rolled out one hell of a euthanasia program that resulted in six million dead Jews along with five or so million others that never seem to get mentioned when discussing the Nazi horrors. The whole point of the monstrously stupid lumpen Republikkkans and their new allies from the Ron Paul movement over this Obama’s socialist (God that’s a hoot) takeover and the coming euthanasia programs are total horseshit, the ones who will march them into the coming gas showers or whatever less ostentatious form of mass murder (China offers a good prototype with the Death Vans and that land of goons is the new prototype for the new generation of American vulture capitalists) programs that pop up in America, likely including forced slave labor to really send those Wall Street stocks soaring will be perpetrated upon them by the very system that they are out cracking skulls, screaming nigger and hanging members of Congress in effigy to keep in power. Bereft of historical perspective and thinking brains the new American SA will meet the same fate of their German predecessors who eventually became such an ugly embarrassment to Hitler that he had them put down during the Night of the Long Knives. But when a raving and drooling lunatic like Glenn Beck, a man with a history of alcoholism, mental illness and suicide running in his family (the moon faced little twit probably fucked his own mother) you end up with scum like this.

Not that I wouldn’t be down with euthanasia, it would be a good solution to America’s rat problem and when the town hall terrorists incite one of their more uptight angry white male losers to open fire in one of them like George Sodini, the ugly chronic masturbator who couldn’t get laid and who shot up the fitness center, Bruce Pardo the Santa suit slayer, Dr. Tiller’s murderer or any one of thousands of other heavily armed, dumbed down and pissed off freaks I am sure that there will be no shortage of volunteers to drive the pick up vans.