Electric blue clouds, literally at the edge of space, have been recently seen glowing in the dark from Oregon to Colorado to Virginia, further south than they have ever been seen. Noctilucent clouds were first reported in the far north after the Krakatoa eruption. Until the last several decades they were always seen north of 50 N Latitude. No one is sure why the clouds are moving south but global warming is a suspected cause.

Noctilucent clouds form at exceedingly cold temperatures around negative 125 Celsius, 50 to 100km (30 to 60 miles) above the earth’s surface, in the mesosphere. The atmosphere is one hundred million times drier than the Sahara desert, but clouds form because the temperature is so low. They are seen in midsummer when the moisture from the stratosphere (the layer below the mesosphere) is known to upwell into the mesosphere. One other likely source of water is upwelling methane gas. Methane is broken down by UV and high energy radiation to generate hydrogen gas which reacts with oxygen to form water. Material from incoming meteors may also add both tiny particles needed to seed the clouds and ice particles which vaporize. Powerful volcanic eruptions may also add particles that nucleate ice. 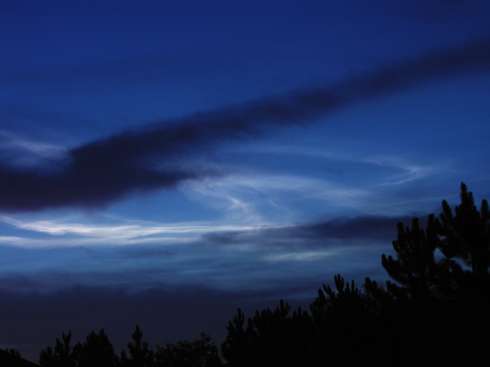 Ordinary clouds, which are close to Earth, get their dust from sources like desert wind storms. It’s hard to waft wind-blown dust all the way up to the mesosphere, however. “Krakatoa may have seeded the mesosphere with dust in 1883, but that doesn’t explain the clouds we see now,” notes Thomas. “Perhaps the source is space itself,” he speculates. Every day Earth sweeps up tons of meteoroids–tiny bits of debris from comets and asteroids. Most are just the right size to seed noctilucent clouds.

The source of water vapor is less controversial. “Upwelling winds in the summertime carry water vapor from the moist lower atmosphere toward the mesosphere,” says Thomas. This is why NLCs appear during summer.

One reason for the recent spread of noctilucent clouds might be global warming. “Extreme cold is required to form ice in a dry environment like the mesosphere,” says Thomas. Ironically, global warming helps. While greenhouse gases warm Earth’s surface, they actually lower temperatures in the high atmosphere. Thomas notes that noctilucent clouds were first spotted during the Industrial Revolution – a time of rising greenhouse gas production. 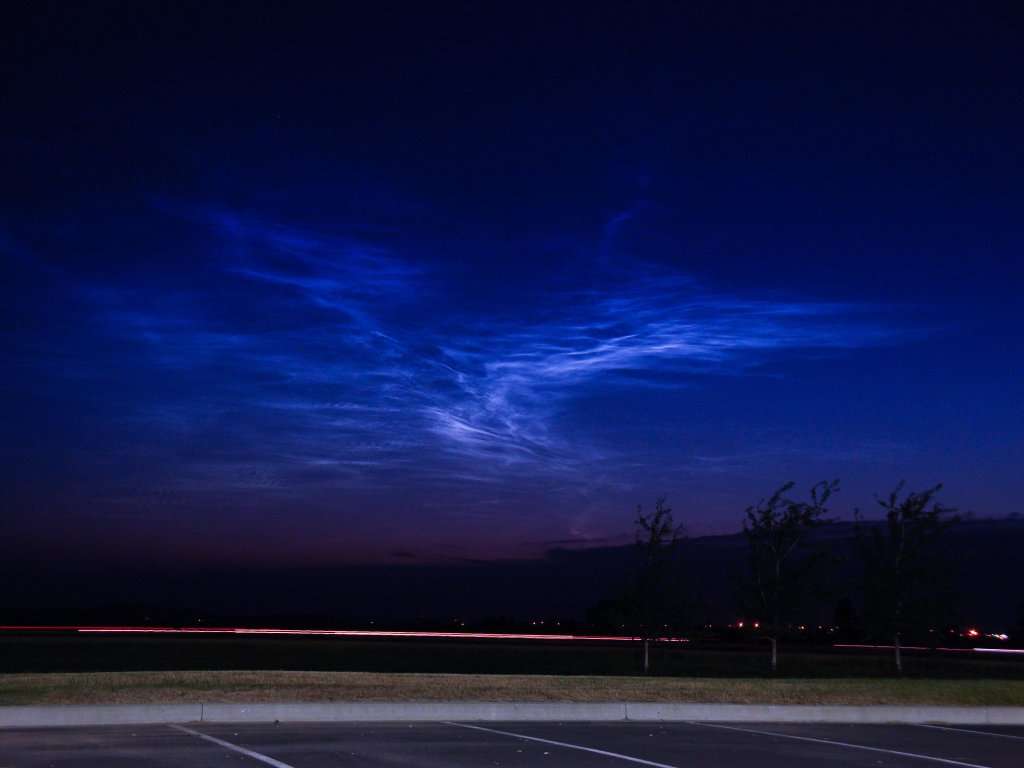 Arctic clouds appearing in the midlatitudes are a beautiful sign of climate change.