The Revolution will not be Televised

It will be twittered and blogged.

(I am leaving reporting on Iran’s Revolution itself for worthier minds, and less busy minds, but wanted to briefly address this one angle. I woke myself at 5am to do so.)

Iran has grabbed control of radio and TV communication, predictably, as would our own nation should we ever try to regain control of our own Corporatocracy.

The frightening thing is, this is a template, if you will, of how a Nation must be ready to technologically block information. Every despot and intelligence agency in the World is taking notes and making plans, including our own Internet Czar.

Sure they can shut down phone service, but how to block all the satellite uplinks that drive the internet and cell phones? The images and reports go viral instantaneously across the globe; especially with a young and savvy population. Standing in a crowd, it is easy to get off a one line twitter, so that all concerned can follow the tag and have warning. or hear of new protest plans. Texting will only go to your circle, so the hashmark tag allows anyone who uses it to connect with all Iranians of a like mine.

People don’t talk about it in terms of “the hive mind” for nothing.

There are rumors that Iran has managed to block the tag #iranelections, but others say it is just overloaded. Instantly new tags pop up to replace the old. Lastest twit from Iran says the rumor is not true, that Iranian government is just saying its blocked, and they are still using the original from the streets.

They have tried to block IP addresses of bloggers, but worldwide, people have created “open” IP’s for them to use to blog under their own accounts on someone else’s bandwith.

It is a game of whack a mole that cannot presently be won.

This is a problem, friends.

A first-test of a problem they have long been trying to solve in this very intertangled “web”. Should they shut down the entire internet, well everything will be frozen, including the things THEY need. They cannot.

Very recently there was a huge push to sell us “Two Internets,” marketed as a “fast lane” and “slow lane.” Savvy people (like ourselves) saw it as a way to make the Rich have a separate internet that was a pay-unit, while weeding into another system the rest of us useless eaters.

We said no, but do not think for an instant this technology is being pursued and is possibly in place here already.

This guide, written by a gentleman in Wales, is something to think about not just now, but in our own future.

The purpose of this guide is to help you participate constructively in the Iranian election protests through twitter.

1. Do NOT publicise proxy IP’s over twitter, and especially not using the #iranelection hashtag.  Security forces are monitoring this hashtag, and the moment they identify a proxy IP they will block it in Iran.  If you are creating new proxies for the Iranian bloggers, DM them to @stopAhmadi or @iran09 and they will distributed them discretely to bloggers in Iran.

2. Hashtags, the only two legitimate hashtags being used by bloggers in Iran are #iranelection and #gr88, other hashtag ideas run the risk of diluting the conversation.

3. Keep you bull$hit filter up!  Security forces are now setting up twitter accounts to spread disinformation by posing as Iranian protesters.  Please don’t retweet impetuosly, try to confirm information with reliable sources before retweeting.  The legitimate sources are not hard to find and follow.

4. Help cover the bloggers: change your twitter settings so that your location is TEHRAN and your time zone is GMT +3.30.  Security forces are hunting for bloggers using location and timezone searches.  If we all become ‘Iranians’ it becomes much harder to find them.

5. Don’t blow their cover! If you discover a genuine source, please don’t publicise their name or location on a website.  These bloggers are in REAL danger. Spread the word discretely through your own networks but don’t signpost them to the security forces. People are dying there, for real, please keep that in mind.

6. Denial of Service attacks. If you don’t know what you are doing, stay out of this game. Only target those sites the legitimate Iranian bloggers are designating.  Be aware that these attacks can have detrimental effects to the network the protesters are relying on.  Keep monitoring their traffic to note when you should turn the taps on or off.

7. Do spread the (legitimate) word, it works!  When the bloggers asked for twitter maintenance to be postponed using the #nomaintenance tag, it had the desired effect. As long as we spread good information, provide moral support to the protesters, and take our lead from the legitimate bloggers, we can make a constructive contribution.

Please remember that this is about the future of the Iranian people, while it  might be exciting to get caught up in the flow of participating in a new meme, do not lose sight of what this is really about

A worthy view is this pictoral from the Globe:

I include these two to show how many cell phones and video cams are in each picture. 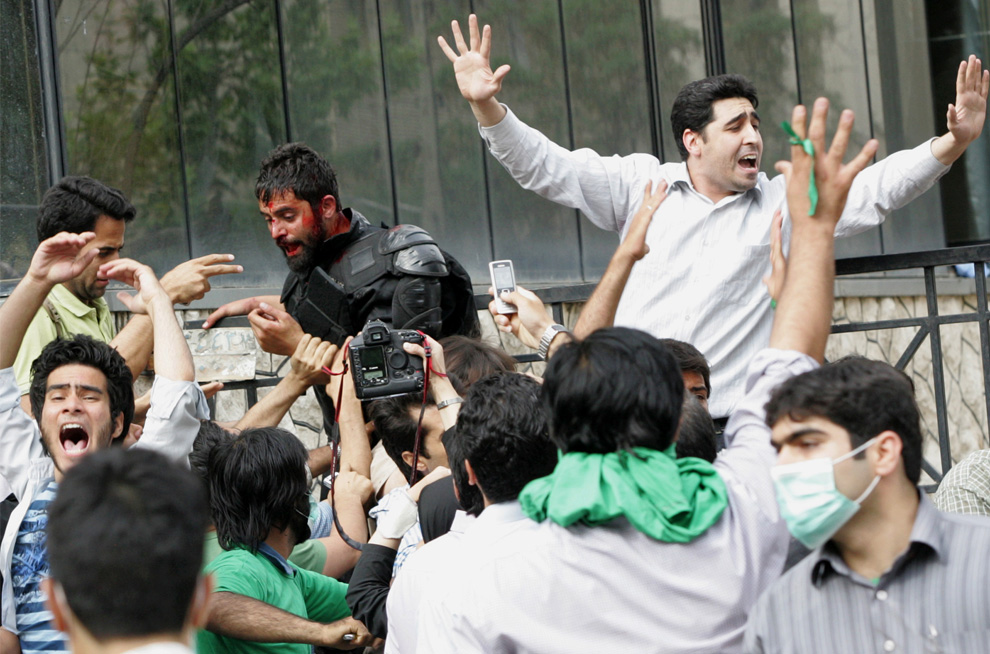 Just in: Ahmadinejad supporters are trying to frame Israeli Twitterers for “trying to destabilize Iran” by supporting moderate Mousavi. Righhhhhhhht.

Even the hackers of disinformation cannot overcome hours of video tape on youtube, twitted actual photos and the words of people on the ground. By volume alone, we see truth. The report is utter bullshit.

In the meantime, think about how to defend our internet, and how to plan around blocks.

The revolution will not be televised.