Seven Years Of Writing About State Killing (with Action Update!)

Did you ever read something that you found yourself musing over (smilingly), even the next day?

Such has been the case with me since yesterday.

You know the French are well known for their “strikes” – and when they strike, they strike.  When their government does something they don’t like, they just strike and shut down the transportation, the electricity, you name it —  they virtually cripple a city with their strikes – and they get HEARD!

Well, now with the economic conditions being what they are and people being laid off, or “sacked” from work, they have developed a strategy for dealing with the CEO’s, who only want to give them “crumbs” as severances. 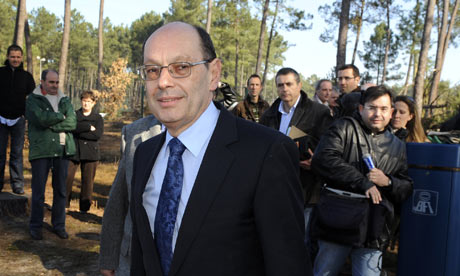 Sacked Sony France workers this morning freed the chief executive they had been holding hostage, on the condition that he was escorted directly to talks with trade unionists.

Angry at their severance packages, the workers had taken Serge Foucher captive yesterday at the videotape plant in Pontonx-sur-l’Adour, in the Landes region of south-west France. He had travelled to the factory for a final courtesy visit to more than 300 sacked workers before the plant closes next month. But dozens of staff took him hostage and barricaded the entry to the site with tree trunks.

Patrick Hachaguer, a representative from the communist-leaning CGT union confirmed that Foucher had spent the night shut in a meeting room. “He won’t listen to us, we didn’t find any other solution,” the union delegate told Agence France-Presse news agency earlier today.

At 10am, unionists escorted Foucher and his director of human resources from the factory and travelled with them in a mini-bus to negotiations to be held in the presence of local authorities in the nearby town of Dax. “I’m happy to be free and to see the light of day again,” Foucher said before climbing into the minibus.

Earlier this morning, around 80 workers were gathered on picket-line and guard duty at the factory. They protested that their payoffs were less than other Sony workers had received in France.

Taking a boss hostage is becoming an increasingly common protest gesture in France. Last year, the English boss of a car-parts factory in eastern France was held for 48 hours in his office, sleeping on a massage table and being provided with blankets and sandwiches. He said he felt like “a prisoner in Alcatraz”.

In another incident last year, police stormed an ice-cream factory in Saint-Dizier to free a manager who had been held hostage by workers angry over job cuts. At least 14 staff were injured trying to stop police releasing him.

The mood of French factory workers seeking justice and revenge has spawned France’s cult film of the year, Louise-Michel, a gothic comedy in which a group of women laid off from their factory in northern France hire a hit man to kill their boss.

Can’t you just imagine someone like John A. Thain, the CEO of Merrill, Lynch, being kept hostage?  Or any of the CEO’s who have cheated American workers over and over?  Boy, oh, boy, would that be fun or what?