Watch where you drop it … you could hurt your feet!

There must be something about the number, but Republicans truly don’t seem to like 1100 page bills.

At the White House meeting, Mr. Gingrich said, he told Mr. Clinton that any “attempt to ram through an 1,100 page bill, which is what I am told the Mitchell measure is, would so embitter the process that I don’t think anything else would pass. I think this is crazy.”

Perhaps if the page count had been different, Americans would have universal health care today.

Yet again, Republicans are more interested in scoring political points 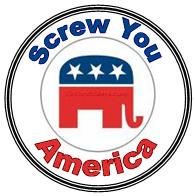 than in solving the nation’s problems and creating a stronger tomorrow for all of us.

I will give Boehner a point: this is a huge bill, in page count and in cost, and there isn’t anyone who has a serious chance to read and assimilate the $100,000,000s of implications of every single page. (Actually, dependent on formatting, this might be over $1,000,000,000 per page.)

Yet, even though there is no one who honestly believes that this is a perfect bill, without problems, knowing “details” isn’t going to sway votes because we aren’t in a circumstance where the Congress was going to go back and spend months restructuring the bill. As the Republicans used to love to say, this simply faces an “up or down vote”.

In fact, Boehner’s ridiculous display fits within the general Republican strategy of just saying no and hoping that things get so bad that Americans forget who operated the steam shovel digging the nation deeper and deeper into problems.

The party that huffed and puffed over every statement perceived as less than full-throated approval of Bush now openly and proudly cheers for the failure of the president. The party that makes a pretense of fiscal knowledge not only opts out of participating in the solution to the problems they created, but salivates over the thought of financial ruin.

Why? Because they’ve made the cold-blooded calculation that there’s no margin for the Republican Party in America’s recovery.  Having brought us to unparalleled disaster, they’ve decided that the only way that the nation might find Republicans acceptable again, is to by bringing us so low that the soles of Dick Cheney’s feet look like “up.” When president Obama warns we may go from crisis to catastrophe, the Republicans sigh longingly and cry out “please!” They’re just hoping we can find a level of misery sufficient to forget their well-demonstrated incompetence.

Yes, Representative Boehner, you can count on the majority of Americans forgetting that Republicans rammed through the Medicare bill, unread by members, in the middle of the night, holding votes open well past the deadlines. Yes, these debt-worrying Republicans, who are complaining about insufficient time and procedural speed in passing the stimulus bill, said nothing then even though that Medicaid Part D legislation was:

1. The largest expansion to the fastest growing program in the budget

2. Supposedly had a pricetag of ‘just’ $395 billion, questioned at that time by ‘outsiders’ with the internal Bush internal administration estimates pegged it at closer to $510B, and the bill likely to be over $700 billion.

3. And, by the way, this was far from an emergency situation with the economic house of all the globe burning down around us. (E.g., 10,000s or 100,000s of jobs didn’t depend on moving the Medicare D money a few days faster.)

NOTE: Republicans can like 1100 page bills, after all the No Child Left Behind weighed in at over two reams of paper.