Obama, McCain and Learning The Lessons of Buchenwald

or “What I Did on my Holiday Weekend” 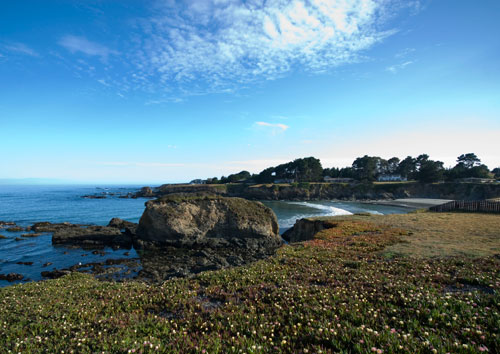 I had an awesome time on the Mendocino Coast – about 140 miles north of San Francisco.  It was a special celebration in honor of  my brother-in-law’s 60th birthday.   My sister and her husband rented a 5 bedroom house on a bluff right next to the ocean.   The above picture is a view from the deck.   All of their close friends from the Bay Area came up as well as another couple from the Midwest.   It was kind of like The Big Chill meets Sideways.

We hung out on the deck, drank a lot of wine, hot-tubbed, and enjoyed the sounds of the ocean.  Many birds cruised by – right at eye level – as they coasted the currents along the bluff.   The house provided a high-power scope to check out the nesting cormorants and abalone divers that visited the cove below. 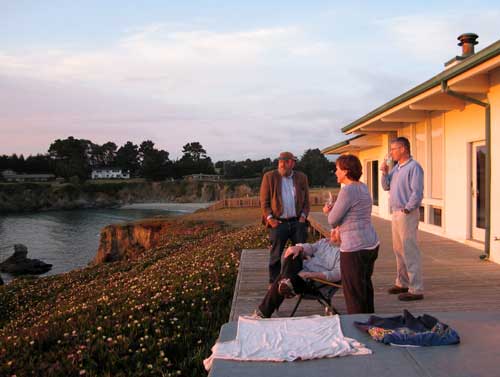 Unlike the shots above, the North Coast is fogged in more often than not.  Saturday was like that.   We took a bike ride along the sand dunes.  It was cool, grey and misty.   That’s my husband riding ahead of me. 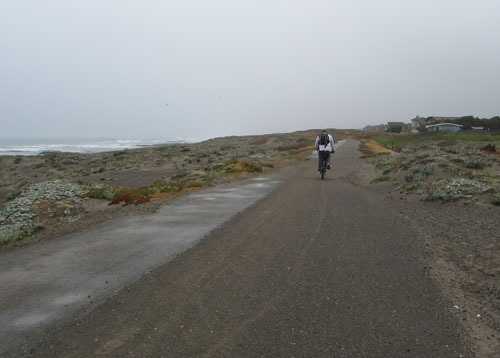 On one of the trails we ran into a group on a horseback ride.   I could not believe this guy was on his cell phone.  How lame is that? 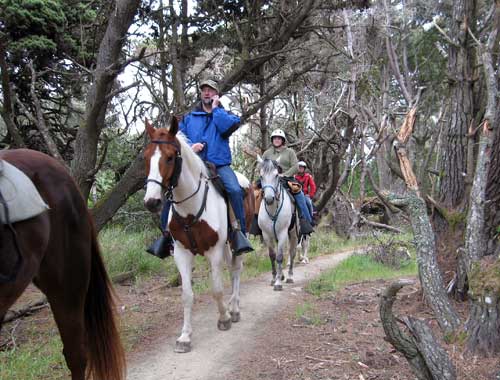 One of my favorite things to do is to go tide pooling.   Here’s some of the gang looking at the pools right below our house.  The two young girls (7- & 12-years old) that were with us had a blast climbing around the rocks, looking for exotic sea creatures. 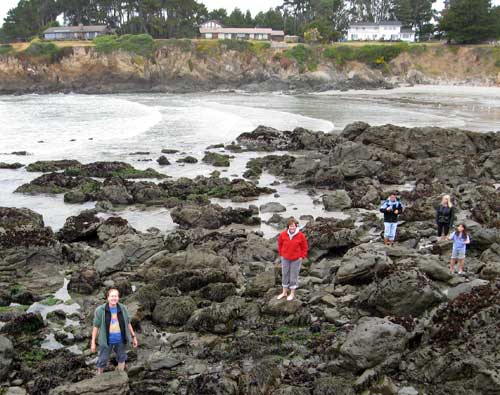 The tide pools there weren’t so great so we went to a diferent location the next day.  It was much better.  We saw anemones, starfish, sea urchins, crabs, clams, mussels, and many interesting types of seaweeds and kelp.

Here’s a purple starfish – a little bigger than the size of my hand. 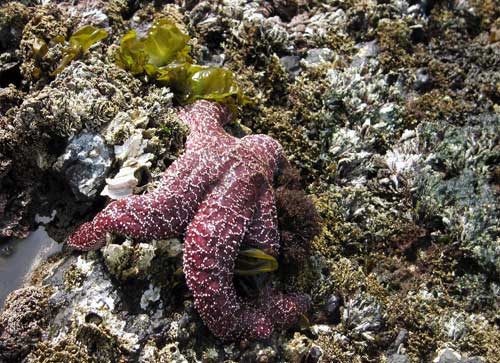 There’s another starfish in the middle of this shot, surrounded by the green anemones. 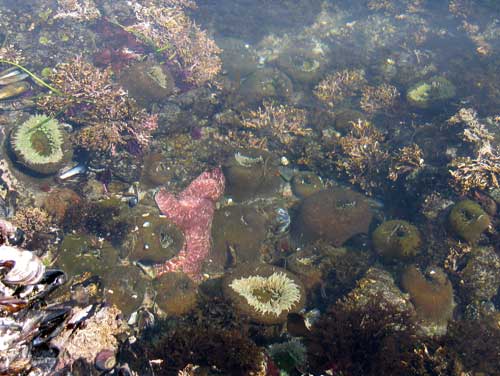 This shot shows some of the spiny purple sea urchins – they are golf ball size or a little larger. 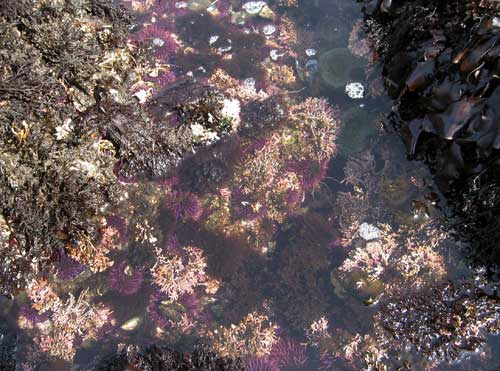 There was a pod of sea lions hanging out on the rocks across an inlet.  They were wary of us but most seemed content sleeping in the sun. 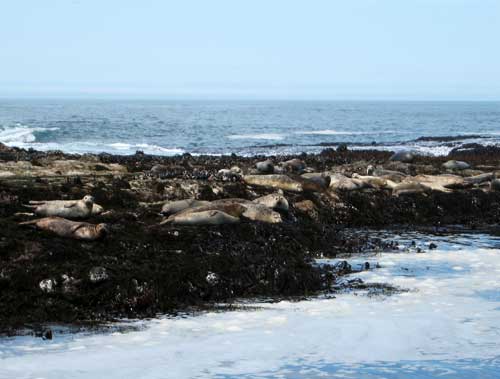 Another of my favorite things is going wine tasting.   We spent Sunday afternoon in the Anderson Valley.  This region is best known for Pinot Noir and Gewurtztraminer wines.

This is the tasting room at Husch Vineyeards.  Very quaint. 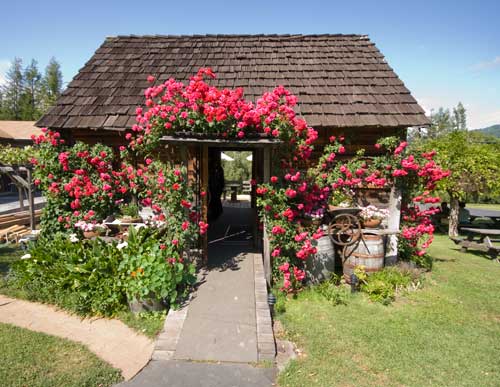 Another winery that I liked was  Greenwood Ridge. Not only was the wine terrific, all the bottles had dragons on them.  I am 99% more likely to buy something if it has a dragon on it.   I picked up some of the Pinot Noir and a Late Harvest Riesling that is sweet and delicious – a dessert all by itself. I tried to find a pic of the dragon bottles but the winery website doesn’t have very big images.  So I decided that I would try to photograph the bottles that I bought.  As I was playing around setting up the shot, one of my cats unexpectedly entered the scene.  I clicked the shutter just as she was coming through.  Silly kitteh.  Sofia is a little clown – always making me laugh.   So I’m sticking with this pic even though you can barely make out the dragons.  There’s a dragon on the glass too. You’ll have to take my word for it. 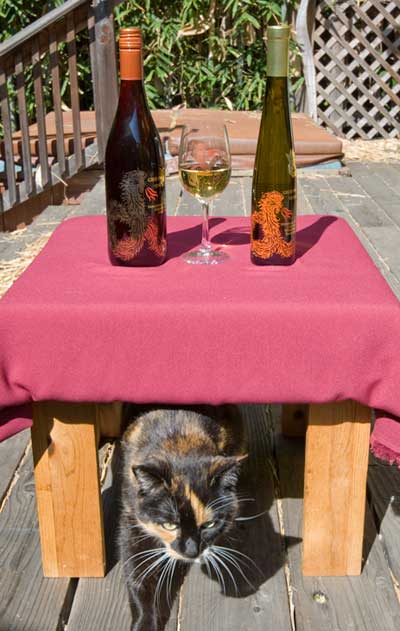 In spite of all the activity and living in close quarters with a dozen other people, I managed to find some moments of peace and reflection.  One time was Sunday morning when I opened my eyes and saw the sun.  I wanted to get up and enjoy it while it lasted.  I had no idea what time it was – it turned out to be 6:45 AM and no one else was awake except for one other woman.  She was on the deck painting 3″ x 5″ watercolors of the sea/sky.  Each one was a slight variation of the scene as the dawn light grew brighter. It was nice to look over and see her progression.   I grabbed a cup of coffee and a blanket and sank back into a chair to meditate over the sea.

The other peak moment was driving back from the vineyards to the coast. It was a winding road through a redwood forest.  Sitting in the back seat with my head out the window to breathe in the damp, fresh woods.  The light was shining through the treetops and I had a little buzz going from the wine.  I grooved on all the trees.  From grandfather redwoods to sapling oaks and majestic Douglas fir.   I praised them for living in such perfect beauty and harmony.   The magic of the forest was profound – I can’t really explain it further. 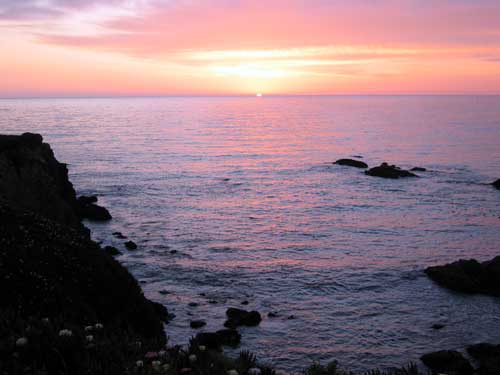 Hope you all had a nice Memorial Day weekend too!