We Are Not Stupid: Day One

The earthquake was a shallow thrust earthquake, similar to the 1971 San Fernando Valley California earthquake in it’s fault mechanism and transfer of energy to the surface. However, it was an order of magnitude greater than the San Fernando earthquake, so much more damage over a much larger area can be expected. It was located on a fault in the mountains just northwest of the Sichuan basin.

The aftershock sequence lines up along the rupture surface of the main shock. The epicenters of the aftershocks outline the area of maximum destruction on the surface. 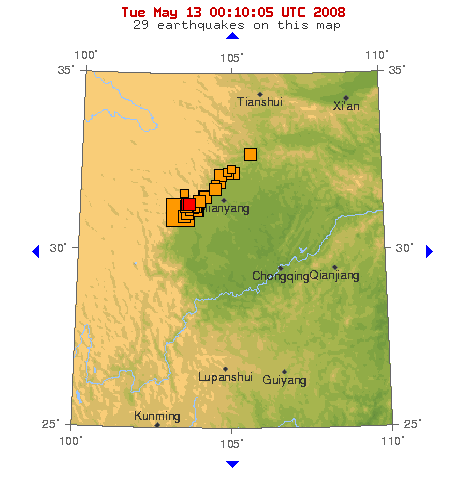 Fortunately for the millions of people living in the basin that strongest shaking was in the mountains along the fault. The aftershock sequence shows that the primary shock began on the southeastern end of the rupture zone and propagated northeast. The heaviest damage can be expected along that rupture path to the northeast of the epicenter because that’s where the energy was focused on the surface as the rupture spread northeast. 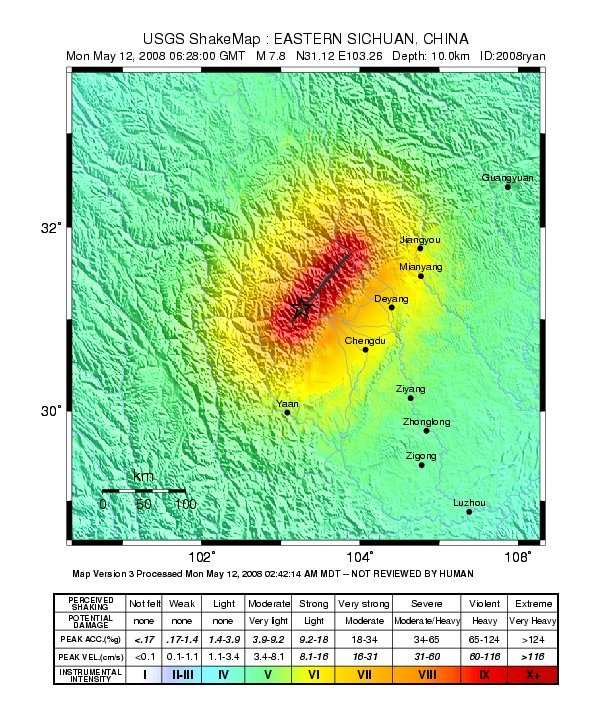 The earthquake was felt in major cities across China including Shanghai as reported here, but those cities will have suffered only minor damage such as objects falling from shelves.

I’m sitting at my desk on the 19th floor in Shanghai doing work and listening to bad 80’s music.  I started to feel a little woozy, as if I was dizzy and needed to lay down for a minute.  That’s when I noticed that the cords on my window  shade were swinging back and forth.  Earthquake!

The swaying lasted about a minute or two here.  I’m sure it was much worse near the epicenter – no word on that yet.

The cause of the earthquake is the thrusting of the mountain block of the Tibetan plateau over Sichuan basin caused by the tectonic compression related to India’s northward motion.

The Sichuan earthquake of May 12, 2008, occurred as the result of motion on a northeast striking reverse fault or thrust fault on the northwestern margin of the Sichuan Basin. The earthquake’s epicenter and focal-mechanism are consistent with it having occurred as the result of movement on the Longmenshan fault or a tectonically related fault. The earthquake reflects tectonic stresses resulting from the convergence of crustal material slowly moving from the high Tibetan Plateau, to the west, against strong crust underlying the Sichuan Basin and southeastern China.

On a continental scale, the seismicity of central and eastern Asia is a result of northward convergence of the India plate against the Eurasia plate with a velocity of about 50 mm/y. The convergence of the two plates is broadly accommodated by the uplift of the Asian highlands and by the motion of crustal material to the east away from the uplifted Tibetan Plateau.

The northwestern margin of the Sichuan Basin has previously experienced destructive earthquakes. The magnitude 7.5 earthquake of August 25, 1933, killed more than 9,300 people.

FYI, The Richter scale has been replaced by the moment-magnitude scale which directly relates to the energy release of an earthquake. I was finishing grad school doing research on an earthquake prediction concept when  Hiroo Kanamori

published the paper that lead to the replacement of the Richter scale.