On Tibet, Dick Lugar, Baichung Bhutia and the Power of One

(Elections can have consequences. I hope for a peaceful transition of power in Zimbabwe, despite Mugabe’s threats to the contrary. – promoted by Magnifico)

Voters in Zimbabwe, sick of struggling to get food and water under his reckless regime, have rejected Robert Mugabwe.

He is reported to be negotiating a transition of power with the leading opposition candidate, Morgan Tsvangirai. Inside sources say he has decided against participation in a run off election.

The negotiations about a possible transfer of power away from Mr. Mugabe began after he apparently concluded that a runoff election would be demeaning, a diplomat said.

Zimbabwe’s economy has shrunk by 40% since 2000, a collapse larger than the Great Depression. It has the world’s highest inflation rate – 100,000% – and 80% unemployment. Its currency is worthless. “Ten million dollars” was worth 40 cents in U.S. dollars three weeks ago. 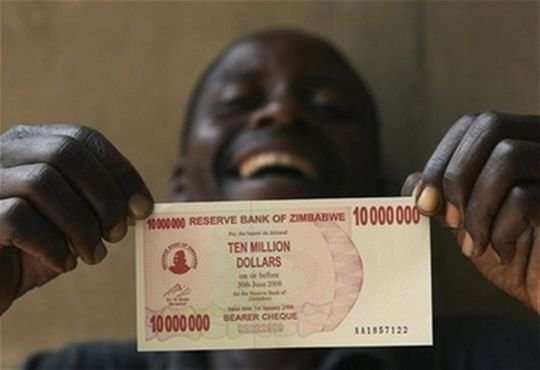 The three million people that left Zimbabwe are supporting the ten million that stayed by sending back foreign currency.

Mothers smuggle their babies across the border to feed them. 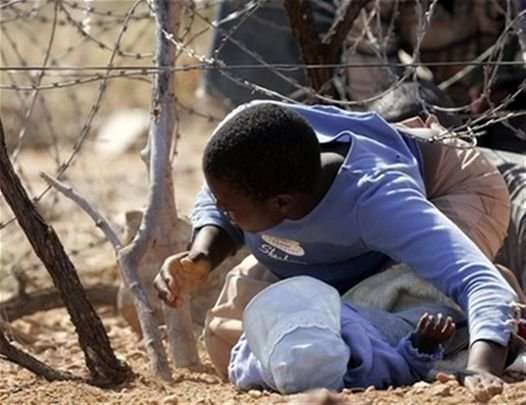 People are struggling to find food and water.

Citizens are surviving by going back to traditional ways of carrying water. The vote against Mugabe is a vote to stay alive.

Ms. Sithole, the former bookkeeper, does not exactly understand what has befallen her country. She knows only that 90 percent of the jobs are gone, that everyone’s savings have been swallowed by inflation, that each house has its own story of personal apocalypse.

In her own woeful tale, she arises each morning to be on the road by 4, carrying 15 buns in a plastic bag, buns that the bakery has “topped up” to a price of $800,000 apiece and she hopes to sell for a simple $1 million.

That early, the air is cool and dark, but there is no shortage of spectral shapes in the moonlight. Those lucky enough to still have jobs are walking their way from Harare’s outskirts to its hub, their incomes too tiny to afford bus fare but their hunger so big they will perhaps part with the cost of a bun.

“This is what Robert Mugabe has done to us, turned us into a nation of peddlers and beggars,” she said flatly, allowing her thoughts to then wander off into the future. “If he remains, we will just die.”

Results from the Saturday election continue to be withheld by Mugabe who apparently intended to rig the elections and declare victory. Nine Million ballots were printed for six million registered voters. However, under pressure from South Africa, election monitors agreed to immediately post election results at local polling stations, making massive vote stuffing obvious. This time he can’t get away with it.

Sources in the ruling ZANU-PF party said on March 31 that Mugabe was preparing to announce a landslide victory after a meeting the previous day where top military and police chiefs are reported to have agreed to rig the numbers so as to produce a 52 per cent straight win in the presidential ballot.

However, this has become problematic because Mugabe’s chief rival, Morgan Tsvangirai, who head the bigger of two factions of the opposition Movement for Democratic Change, has polled much better than Mugabe in results which are already posted at polling stations and are therefore in the public domain.

Some members of ZANU-PF’s politburo believe a run-off would be the best way to avoid the widespread violence which might follow an obvious vote-rigging exercise where the official result did not tally with local figures.

Fear of revolt within his own party has apparently forced Mugabe into negotiations with the opposition MDF party.

Robert Mugabe is under growing pressure to recognise defeat in Zimbabwe’s presidential election as the opposition held talks with military and security officials today.

The Movement for Democratic Change (MDC) declined to discuss details of contacts with the military. But one party source said that the MDC was in touch with senior officers, which shows that support for Mugabe within the ruling Zanu-PF is beginning to erode after the shock of what appears to be a comprehensive defeat in Saturday’s presidential and parliamentary elections.

Mugabe’s security cabinet decided on Sunday night not to recognise defeat after the state election commission forewarned the president that he had lost the vote.

Mugabe’s ZNF Party has been shocked by the election results. ZPF Party members are trying to save their positions of power and protect themselves.

On Monday, MDC presidential candidate Morgan Tsvangirai approached former army chief Solomon Mujuru, who is still a powerful figure within the military, to say the MDC was prepared to reassure the security establishment that a transfer of power would not lead to prosecutions for past crimes or a purge.

The MDC also reached out to more moderate elements of Zanu-PF, including MPs with whom it has had a working relationship.

“Mugabe and some of those around him decided to try to brazen it out by fixing the results,” said a senior MDC source. “But Zanu-PF is not united. It has taken a big blow that it didn’t expect and there are important people in the party who recognise that they cannot go against the will of the people. They are shocked and do not have the spirit to go down fighting for Mugabe.”

The streets are relatively calm while people wait for the delayed results, but revolution is in the air.

It’s either the guy just has an ear for good music or this is simply his deliberate idea of bringing “protest music” to the public domain. Others however, despite enjoying the music, still think this guy is plain stupid. This is a council owned “beer garden” as these places were called during the Federation years and are still thus called where men and women gather to take in huge quaffs of opaque beer. They do this under beautiful shady trees where a cool breeze defies the harsh African sun and they breathe good clean air and experience nature’s beauty – gratis.

Blaring from the speakers of a public address system with the din reaching more than 5 five neighbourhood streets is music which is likely to earn the man spinning the discs a thorough beating from the thought police. He plays Hugh Masekela where he exhorts by name African despots – including our very own – to cede power and retire peacefully; he plays Mbongeni Ngema’s Freedom Is Coming Tomorrow, from the Sarafina soundtrack; he plays Thomas Mapfumo’s Jojo; he plays that Oliver Mutukudzi classic Bvuma. And I am like, “What the %*$#? This is Sunday where those who voted and those who didn’t are at the pub imagining they are whiling away minutes expecting the Zimbabwe Electoral Commission to begin the announcement of Saturday’s polls and here is a guy nailing his colours to the mast giving patrons – and whole neighbourhoods – his thoughts about the current affairs.