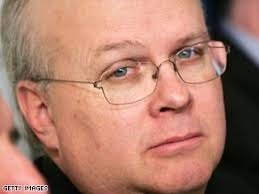 Roger Shuler is a former journalist who, according to his bio at OpEdNews lives in Birmingham, Alabama, and works in ‘higher education’.

Shuler goes on in his bio there to say that “I became interested in justice-related issues after experiencing gross judicial corruption in Alabama state courts. This corruption has a strong political component. The corrupt judges are all Republicans, and the attorney who filed a fraudulent lawsuit against me has strong family ties to the Alabama Republican Party, with indirect connections to national figures such as Karl Rove. In fact, a number of Republican operatives who have played a central role in the prosecution of former Alabama Governor Don Siegelman (a Democrat) also have connections to my case”. Shuler is also author of his blog Legal Schnauzer, where he asked on December 14 Is Karl Rove Driving the Effort to Prosecute Julian Assange?

Today over at RawStory, David Edwards writes that “Former Bush political strategist Karl Rove may be connected to a Swedish effort to prosecute WikiLeaks founder Julian Assange, sources for several legal experts suggest” and that “Rove is a longtime adviser to Swedish Prime Minister Fredrik Reinfeldt, who recently tapped the Republican operative to aid his 2010 reelection campaign”:

Speaking to Legal Schnauzer’s [Roger] Shuler, an unnamed source suggested that Rove is likely “playing a leading role in the effort to prosecute” Assange. The founder of the secrets website was arrested Dec. 7 in London after Sweden issued a warrant for alleged sex crimes

After Assange’s release on bail, Guardian obtained and published leaked details of the allegations against him. A WikiLeaks source told The Australian that the leaked police reports were “a selective smear through the disclosure of material.”

And there’s no coincidence that the charges against Assange originate in Sweden, Shuler’s source said.

For at least 10 years, Rove has been connected to Swedish Prime Minister Fredrik. More recently, Fredrik, who is known as “the Ronald Reagan of Europe,” has contracted Rove to help with his 2010 re-election campaign.