NN11: The Reasons To Attend

First I want to apologize for not being able to keep up with writing, I was busier than I really expected to be and it was a lot more walking, so I was pretty tired at the end of the day. There is a lot to report, some of it was positive, at least from the perspective of our ability to improve our web sites and make them better and sustainable. It was pointed out in one of the panels, web sites like Daily Kos, Firedoglake, Think Progress and, yes, The Stars Hollow Gazette are now part of the “Main Stream Media”, the “untraditional” part. The traditional media now reads and quotes us. We are getting louder and noticed.

This is my second Netroots convention. I went to NN09 in Pittsburgh after I had returned from a year long hiatus from blogging. In 2008, I was very disappointed with the DNC for nominating Barack Obama and disenfranchising the voters of Florida and Michigan. Needless to say I am not surprised that many liberal and independent voters have now removed their rose colored glasses and are seeing Obama for the corporatist, right winger that he is.

Agree or not, Netroots Nation has grown and is getting the attention of the traditional MSM. This was very evident with the tough questions on jobs, marriage equality, the multiple wars, etc., that were put to White House Communications Director Dan Pfeiffer and the coverage from numerous MSM sources. The audience didn’t like his pap answers and he was roundly booed. This would not have happened last year.

The video starts off with Minnesota’s US Senator Amy Klobuchar. The interview with Pfeiffer starts at about 11:00 minutes.

Warning: secure all objects that if thrown at your monitor would do severe damage.

“There has been much that has been accomplished in the first 2 1/2 years, and as the President said the other night, the work is not done. There are more things we want to do,” he said. “We can either work together to continue that work and finish the project we started in 2008, or we can be relegated back to the sidelines and see what a Republican president with potentially a Republican congressional majority in at least one country, will do to this country.”

“We’ve had that experience. It started in 2000. We ended up with massive deficits, we ended up with a war in Iraq, we ended up with massive violations of people’s civil liberties. We ended up with corporate interests like Wall Street running rampant through Washington. That’s the choice there. This President is as committed to the ideals he ran on today as he was the day he stood in Springfield, Ill. in 2007. He has fought for them as hard as he could. Washington is a hard and frustrating place. We’re doing it under tremendously challenging circumstances, and he’s going to keep fighting for them. On some of the things that you care about and he cares about, I promise you he is as frustrated as you are that we haven’t been able to get it done.”

Based on these reassuring words, the response is supposed to be, “well, gosh, the alternative is worse, so I guess we should still vote for Obama.”

No. Just no. You’ve had your chance to prove you are indeed different, and you’ve failed on every front. Even though I have often decried the intolerant, inhumane, radical extremism, nuttiness and willful ignorance of what the Tea-GOP has become, I no longer believe that President Obama is meaningly different from what President Mitt Romney would be or indeed would have been.

And as I could never vote for the unprincipled moral chameleon Romney, I cannot vote again for a faux Democrat whose policies and moral sentiments now seem little different from Romney’s.

I defy any Obama spokesperson to point out any meaningful difference between what Obama has done and what a President Romney would have done.

I was not at all uncomfortable stating that I would not support or vote for Obama, that I was done with voting for the lesser of two evils and that the scare tactics of the possibility of a President Pawlenty or Bachmann were no worse than what we already have in the Oval Office. What we need to do is work our butts off at the local level to take back the House (we are 24 seats short), strengthen the Senate and to primary blue dogs. It is time we became Egyptians and Wisconsinites.

Russ Feingold is a hero, and for good reason, to progressives. Russ was one, if not the only one, of the Democratic Senate, make that Senate as a whole, who really stood up for civil liberties in the face of the bipartisan onslaught that has occurred over the last decade, both under George Bush and Barack Obama.

Russ Feingold: ‘The Democratic Party Is In Danger Of Losing Its Identity’

MINNEAPOLIS, Minn. — Former Wisconsin senator Russ Feingold issued Democrats a dire warning at the annual Netroots Nation conference here on Thursday, saying the party was in danger of losing its “soul” if it accepts corporate contributions in the 2012 elections.

“Sometimes we have to be very direct with the Democratic Party,” said Feingold to the crowd of progressive activists and bloggers at the Minneapolis Convention Center. “Just as you have long pushed our Democrats to stand up for their ideals, I’m here this evening to ask you to redouble your efforts. I fear that the Democratic Party is in danger of losing its identity.”

“Creating those kinds of super PACs for Democrats is wrong. It is not something we should do. I disagree,” Feingold said. “I think it’s a mistake for us to take the argument that they like to make — that what we’re going to do now is, we’re going to take corporate money like the Republicans do, then after we win, we’ll change it. When’s the last time anyone did that? Most people don’t change the rules after they win.”

Yesterday was a busy day here at NN11 in sunny, warm Minneapolis, MN. There are so many really interesting panels that choosing which to attend is tough. I’m also here in a different capacity than I was in Pittsburgh two years ago, I have two webs sites that I administer. I’ll talk about that later probably when I get back.

On  of the outstanding panel I attended was with Jane Hamsher of FDL, John Aravosis of AMERICAblog, DADT, LGBT and Army veteran Lt. Dan Choi and Dream Act activist Felipe Matos. They discusses what progressives could do when the president is not into your issues and how to get the administration to take the lead. When the floor opened to questions, the first person to a approach the stage was a young an who said he was a member of Obama For America (OFA) who managed to cause an incident that has gotten quite a bit of attention from the internet and on-line news media:

Lt. Dan Choi, who was discharged from the military for running afoul of its anti-gay Don’t Ask, Don’t Tell policy, provided a visual when an Organizing for America volunteer stood up and asked him to support Obama in 2012. The man said he did not support gay marriage — “civil unions?” he offered weakly — and Choi promptly ripped up an Organizing for America flyer he had been given and threw it back in the man’s face.

I also had the pleasure and honor of saluting Lt. Choi and giving him a hug. Here’s is the video of the full panel which was quite a lively conversation

Several hundred people turned out for an anti-war rally in Minneapolis at the intersection of Lake and Hiawatha streets. I found out about this rally after reading Bikemom’s diary here on Docudharma.

Nearly all of the participants at the rally expressed concern that Bush is planning a war with Iran. I compared the tally for the Kyl-Lieberman Bill that declares part of Iran’s army a terrorist group to the vote for the Iraq war authorization. The votes were 76-22 and 77-23 for Iran and Iraq bills, respectively.  We haven’t made any ground since the killing began. The last photo shows the US flag flying upside down which is a sign of distress.  Indeed it is….. 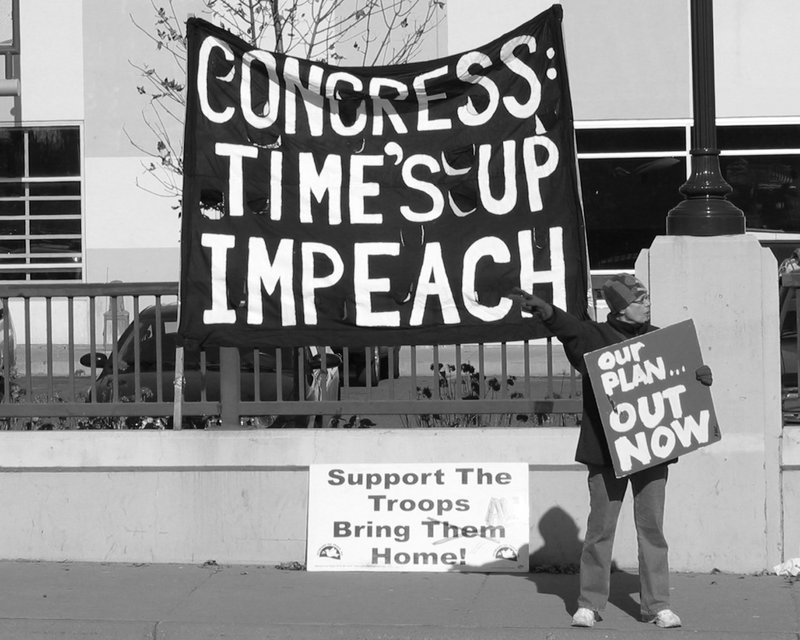