ek hornbeck and I traveled through Nova Scotia twice and spent several days in its capital Halifax. The city has a large maritime museum that houses artifacts from the Titanic, which sank in April if 1912 and cemetery where some of the victims are buried but that is just some of the city’s history. On a tour of a two hundred year old brewery, we learned that Halifax has another tragedy that destroyed much of the city killing approximately 2,000 people and injuring over 9000 when two ships, one laden with high explosives collided and exploded in the harbor. The blast was the largest human-made explosion at the time, releasing the equivalent energy of roughly 2.9 kilotons of TNT, one of the largest non-nuclear ever to take place. 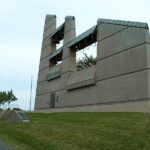 Mont-Blanc was under orders from the French government to carry her cargo from New York City via Halifax to Bordeaux, France. At roughly 8:45 am, she collided at low speed, approximately one knot (1.2 mph or 1.9 km/h), with the unladen Imo, chartered by the Commission for Relief in Belgium to pick up a cargo of relief supplies in New York. On the Mont-Blanc, the impact damaged benzol barrels stored on deck, leaking vapours which were ignited by sparks from the collision, setting off a fire on board that quickly grew out of control. Approximately 20 minutes later at 9:04:35 am, the Mont-Blanc exploded.

Nearly all structures within an 800-metre (half-mile) radius, including the community of Richmond, were obliterated.[4] A pressure wave snapped trees, bent iron rails, demolished buildings, grounded vessels (including Imo, which was washed ashore by the ensuing tsunami), and scattered fragments of Mont-Blanc for kilometres. Across the harbour, in Dartmouth, there was also widespread damage.[1] A tsunami created by the blast wiped out the community of the Mi’kmaq First Nation who had lived in the Tufts Cove area for generations.

Relief efforts began almost immediately, and hospitals quickly became full. Rescue trains began arriving the day of the explosion from across Nova Scotia and New Brunswick while other trains from central Canada and the northeastern United States were impeded by blizzards. Construction of temporary shelters to house the many people left homeless began soon after the disaster. The initial judicial inquiry found Mont-Blanc to have been responsible for the disaster, but a later appeal determined that both vessels were to blame. In the North End, there are several memorials to the victims of the explosion.

The people of Nova Scotia are warm friendly and welcoming. It’s a great place to visit after the pandemic is under control.