My daughter informed me that the autumnal season does not follow the astronomical calendar which follows the sun. The traditional autumn season actually starts the first day of September. At green markets and grocery stores there are more apples, pears and squash at lower prices. However, We are still in that awkward time with an abundance of late summer harvest of corn, tomatoes and summer squash. Here are some recipes to get through the transition. 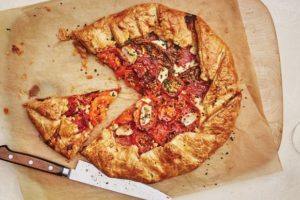 Salting the tomatoes ahead of time and letting them release some of their liquid is essential. It will allow the tomatoes to caramelize and ensures that the bottom of the crust stays flaky

Slowly roast a trimmed, center-cut piece of salmon over a bed of herbs to infuse the flesh with fresh flavor; then bring it to the table in the pan so guests can help themselves. This dish is also good at room temperature or served cold at your next picnic.

For a quick 15-minute dinner, you can steam the potatoes up to five days in advance. Serve with lots of fixings for an easy variation on the taco bar concept.

The method for marinating the feta in this salad is also a good trick for other fresh cheeses—try goat, mozzarella, or paneer.

Crispy Pan-Seared Chicken and Zucchini with Olives and Lemon

This recipe will amaze the zucchini-averse and anyone who thinks they’ve had zukes every which way. Crosshatching and salting the zucchini for 10 minutes before cooking removes excess moisture and lets the seasoning penetrate all the way through. Next, a hard sear in the fat left over from cooking chicken thighs keeps them crisp-tender. Douse them with a lemony garlic oil studded with olives and chiles, and you’ll love zucchini forever.

Our favorite apples for baking are Pink Lady, Honeycrisp, and Granny Smith; they hold their shape well and don’t turn mushy when cooked. This would also be excellent made with Comice or Bartlett pears.

While preliminary tests found low levels of the nitrosamine impurity N-nitrosodimethylamine (NDMA) in some ranitidine products, the FDA said this does not mean patients taking the drugs should stop using them now.

The new standard was introduced in 2001. Since then, the percentage of public water systems in violation fell from 1.3% in 2008 to 0.55% in 2017, researchers found. A few counties in California and Texas accounted for most of the violations.

U.S. health officials have revised downward the number of cases of a severe lung injury linked to vaping, from more than 450 cases cited last week to the total of 380 cases announced late Thursday.

Is Your State One of the ‘Most Obese’ in America?

The news came amid growing concern over the six deaths and 450 possible cases of lung illness linked with the use of e-cigarette products. But many of those cases appear to be linked to THC cartridges, not flavored tobacco.

What Is Your Risk for Prostate Cancer?

The American Cancer Society estimates there will be nearly 175,000 new prostate cancer cases in the United States this year and over 31,000 deaths. One in nine men will be diagnosed with prostate cancer in their lifetime.

Investigators at Baylor University in Waco, Texas, found caregivers lost between 2.5 to 3.5 hours of sleep a week due to difficulty falling asleep and staying asleep.

EPA to Phase Out Chemical Testing on Mammals

The EPA has long required that new chemicals be tested on a variety of animals — including rats, dogs, birds and fish — to assess their toxicity. The percentage of tests that involve mammals was not immediately available from the EPA.

Are Shorter Folks at Higher Risk for Type 2 Diabetes?

The German study found that each additional 10 centimeters (about 4 inches) of height was linked to a 41% lower risk of type 2 diabetes in men and a 33% lower risk in women.

At the end of pregnancy, a woman’s uterus and the baby take up a large portion of the body.

The study found that when women under 60 received hormone replacement therapy (HRT) after surgery, their risk of dying during the 18-year follow-up period decreased by almost one-third compared to women taking a placebo.

When links between digital technology use and mental health were found, they were minor and positive, according to the report.

A new study reports the occasional nap appears to cut in half people’s risk of heart attack, strokes and heart disease, compared with folks who never nap.

Officials will have the power to revoke any medical exemptions written by a doctor who’s faced disciplinary action.

HPV ‘Herd Immunity’ Is on the Rise Among Adults

Oral HPV infections declined by 37% among unvaccinated 18- to 59-year-old men between 2009 and 2016, according to a Sept. 10 report in the Journal of the American Medical Association.

There have been 1,241 cases of measles in the U.S. in 31 states so far this year. That’s the highest number reported here since 1992, according to the CDC.

A warning letter has been sent to Juul Labs Inc. about illegal claims that its electronic cigarettes are safer than tobacco cigarettes, including a presentation to students, the FDA says.