Samhain: The Thinning Of The Veil

cross-posted from Voices on the Square 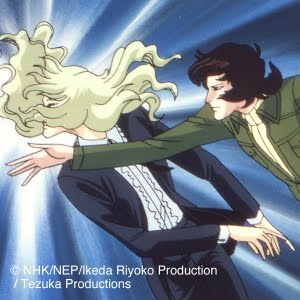 Erica Friedman at Yuricon starts out an explanation of the term “yuri” by writing:

The term Yuri (??) is used to refer to stories that contain romantic or sexual relationships between girls or women or, sometimes more generally, stories with a lesbian character.

Now, manga and anime are commercial media, and so Sturgeon’s Law applies: 90% of everything is crud. Indeed, we might say that what makes somebody a “fan” of a genre is an appreciation of not just the 10% of the genre that is good, but an appreciation of some of the 90% that is crud.

Every genre has its history. From what I understand, part of the history of yuri is the “tragic lesbian”. And the “Tragic Lesbian” features strongly in “Oniisama E”, aka Dear Brother, originally created as a manga by the manga-ka (manga artists) Riyoka Ikeda in 1975, and made into an anime by Tezuka Productions in 1991.

Now, I’m not a media reviewer, and you can read Okazu non-review for a non-review or skim the Wikipedia Oniisama_e… page if you need an extended introduction to this melodrama.

However, if you reside in North America, you can, instead, stream it starting with Episode One: The Magnificant One as Nanako Misonoo, a first year student, starts her life in High School and encounters the “stars” of the school, “Hana no Sainte-Juste (Rei), Kaoru-no-kimi (Kaoru), and Miya-sama (Fukiko)” (according to the Wikipedia machine ~ I want to avoid charges of plagiarizing from Wikipedia).

Now, to see that free stream, you’ll have to sign up for a membership at the AnimeSols.com site,

That is not a bootleg stream: that is a legitimate stream under permission of the rights owner.

But, how can a more than twenty-year-old anime series that has never had an English license be available with a legitimate, free streaming?

Well, that is a story about what the AnimeSols.com site is, and what its trying to accomplish.

AnimeSols: Experimenting With Crowdfunding to Make A Niche Available

I’ve discussed AnimeSols in Experiments in a new media economy, from 27 May, 2013, under the heading, Trying to Make Unlicensable Classics Licensable.:

Sam Pinansky had a different objective in mind. Sam Pinansky has established a career in Japan as a translator, among other things. Sam studied as a research physicist, and originally got his start translating as a member of a fansub group. After finishing a post-doc in Japan, he was able to stay in Japan by making the leap into professional translating, which has included translating subtitles for the new legitimate streaming.

Sam has been thinking for a while about the challenge of releasing series that are impossible to release under the normal rules of the game. These are classic anime, from the 70’s and 80’s (and maybe someday 90’s and Noughties) which were never licensed for overseas release. They have no official English subtitles or dubs available. They were originally released before fansubs were commonplace, so they had little profile or exposure in the West. Based on the audiences attracted by streaming release of anime of similar vintage, getting finance for a simulcast would be challenging.

So what Sam has done is to establish a partnership with the original Japanese rights owners to support them offering a combination streaming site and crowdfunded finance site, AnimeSols. Rather than the “pledge whatever level” system of Kickstarter with special benefits tied to passing certain thresholds, the AnimeSols crowdfunding system is based on specific pledge levels for specific benefits.

Of the first wave of series made available for crowdfunding, two were successful: Creamy Mami, a foundation “Magical Girl” anime, and Black Jack TV, the Physician and Surgeon with mad skills and a tragic past who has had his license revoked.

Dear Brother was picked up to get its chance to have a release funded in the second wave of series, after the first 13-episodes sets of Creamy Mami and Black Jack TV were successfully crowdfunded. And looking at the progress of Dear Brother gives some idea why this Crowdfunding plus Free Streaming has a chance to allow series to be released that would be unlikely to ever gain a conventional home video release.


The Economics of Crowdfunding A Niche Home Video Release

The lowest cost conventional release for an anime series is a box set with the original Japanese video and audio, and overlaid English subtitles. A modest subtitle-only release that sells 3,000 copies is a moderately successful release. A release with an English dubbed audio track will be accessible to a wider audience, but the cost of an English dub adds substantially to the production cost: as described by long-time Western anime industry insider Justin Sevakis at AnimeNewsNewtwork:

Just like the production of the show itself, paying a license fee up front is basically a bet: essentially the distributor is wagering that they can sell enough copies to recoup that license fee. And in fact, until they do, they don’t have to pay anything more to the licensor. That’s why it’s called a “minimum guarantee” — it’s the minimum amount that they would be on the hook for a given series. In the event the show makes money, the licensors get a royalty after that — typically 20-30%.

And so, for the first few thousand copies sold, money from a DVD doesn’t go directly to the producers of the show, but instead goes towards refilling what the distributor already paid for it, as well as their production costs (which can range from a few hundred dollars for a barebones subtitled DVD, to over US$10,000 per episode to produce a dubbed Blu-ray.) Every show that never recoups its money makes it harder for them to pay the MG for the next series.

And at present, with 10 days remaining as I write, 162 people have pledged to support Dear Brother.

Even if a conventional distributor could be confident that three times as many people would ultimately buy the box set, that’s only about 500 sales … far short of the 3,000 or so that makes for a moderately successful budget subscription-only release.

And yet, Dear Brother has already come around the back stretch and has entered the home straight, with a very real chance of getting funded.

How does that work?

AnimeSols establishes a budget required to license a show for home video release in North America, based on a production run of 1,000 box sets. 1,000 sets is the minimum sized order for reasonable scale economies. For Dear Brother, the budget is $13,000 for a 13-episode set. The basic unit is 13-episodes because, unlike US TV, each Japanese TV broadcast season is 13 weeks long, corresponding to an actual season, and a complete series may be from one season long to several years long. Dear Brother is 39 episodes long ~ 3 “broadcast seasons” ~ but the crowdfunding is working on the more manageable single season at a time.

Each during its pledge drive, week, a new episode of Dear Brother has been streaming at the AnimeSols site. This is one thing that sets AnimeSols apart from Kickstarter for crowdfunding: there is a reason to come back to the site each week independent of checking up on the progress toward the goal, and something to share with others other than just an appeal to support the project with a pledge.

Dear Brother is already up to Episode 12, and next week is episode 13 with the season climax … and shortly after that is the funding deadline to get the first season funded.

$30 for a 13-episode boxset is $2.30 per episode, which is around what one would expect to pay for a budget sub-only anime release. For example, the budget release of the first season of the Maria-sama ga Miteru yuri anime from Nozomi (the home video arm of the anime and manga distributor RightStuf)) has a List Price of $40 for 13-episode, but is sold online from RightStuf for $30.


In What Way Is This Supporting Lesbian Work?

So, in what way is pledging to support Dear Brother an action in support of “Lesbian Works”? And why did I just put the phrase in self-conscious quotes?

I don’t know for sure that it is. I’m a straight guy, and I like yuri anime of the romantic / melodramatic variety because it does not have the male “insert” protagonist that infests much of anime. That is the clumsy, inarticulate, close to personality free, normally teenage boy that seems to be there to allow a teen or young adult male viewer to identify with the protagonist, sometimes fantasize about being in the protagaonist’s shoes, while also feeling a bit to a lot superior to the protagonist. As I am neither teen nor young adult, whatever internal psychological buttons there may have been for that kind of insert character to push have clearly worn down decades ago, if they were there in the first place. So I like cheering for Nanako Misonoo to succeed in her various High School trials and tribulations without having the plotting, characterization and direction hitting me over the head to identify with the character.

Some yuri manga and anime qualify as Lesbian Works so that supporting them qualifies as “Supporting Lesbian Works” … some yuri manga and anime are directed to excite teenage boys (of a variety of ages) with the idea of Hot Lesbian Sex. They might have succeeded, and some of the fans might have got custom-made Anime Dakimakura Pillow as a part of their fandom collections.

So I’m not actually going to advance the claim that supporting the Dear Brother crowdfunding effort is one way to support the production of Lesbian Works.

… and point out that there is 10 days and counting (at the time of writing), in order for the project to make the final 25% (at the time of writing) of its $13,000 budget, so if you are considering supporting it on those ground, because you like all-girls-school melodrama, or as a tribute to the work of manga-ka Riyoka Ikeda, or the legacy of manga-ka and anime creator Osama Tezuka …

… the clock is ticking.

If you do wish to support the series, bear in mind that given the set-up of AnimeSols, there are multiple avenues of support: