I have a dreadful lump in my throat!

Despite the fact that people have been signing Petitions left and right, calling their Representatives all day long and days prior, sending e-mails, doing everything possible to avert an intervention in Syria, and despite the fact that the percentages against any intervention, ranging between 83% against and 17% for and, some at 74% against and 24% for, I fear it’s probably a done deal.  And, once again, the American peoples’ responses have been/are being ignored . . . . .!

As you know, TMC has informed you that Senate Committee passed an authorization to strike Syria.

Here is an article you may want to keep (contains a graph showing how members have voted so far — we need to remember these people).  Will Congress Support Military Action In Syria?

As you will note within the article, Think Progress is keeping an Excel accounting of each Congressperson and his or her vote.

But, next, you will understand my REAL reasons for believing it’s a done deal!  It’s all about what we don’t know and, essentially, the only way you can learn or find out about what’s REALLY GOING ON is to go outside the country for information.

While the first article I’m showing is alarming, to say the least, it is probably not that surprising to so many of us.

The first cell of Syrian rebels trained and armed by the CIA is making its way to the battlefield, President Barack Obama has reportedly told senators.

by:  Raf Sanchez in Washington

During a meeting at the White House, the president assured Senator John McCain that after months of delay the US was meeting its commitment to back moderate elements of the opposition.

Mr Obama said that a 50-man cell, believed to have been trained by US special forces in Jordan, was making its way across the border into Syria, according to the New York Times.

The deployment of the rebel unit seems to be the first tangible measure of support since Mr Obama announced in June that the US would begin providing the opposition with small arms. . . . …

Strange, I’ve read a number of articles saying that there was absolutely no proof that Assad was gassing his own people and most speculated it was the “rebels” that were doing the gassing.  But, as you know, we are not supposed to know who’s doing what to who . . . . only to blindly accept whatever is being “force-fed” us to believe!

As though that were not enough in its own right, I have now just scanned another article, which details our moves and positioning PRIOR to the so-called chemical weapons’ attack, allegedly by Assad.  This is an in-depth accounting.

By Michel Chossudovsky (about the author) 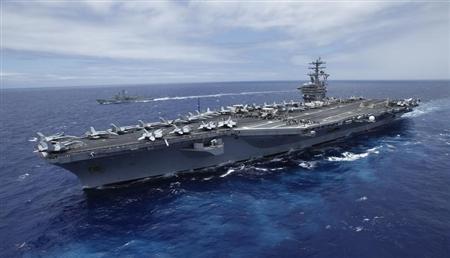 (Please note that while this is The Nimitz, it is not the same photo

as shown in the article, because of difficulties encountered.)

A massive US and allied naval deployment is occurring in the Eastern Mediterranean off Syria’s coastline as well as in the Red Sea and the Persian Gulf.

While this display of military might may not be part of an immediate attack plan on Syria, it is creating an atmosphere of fear and panic within Syria.

The US Navy has deployed the USS San Antonio, an amphibious transport ship to the Eastern Mediterranean. The San Antonio is joining five US destroyers which “are already in place for possible missile strikes on Syria, a defense official said Sunday.”


The USS San Antonio, with several helicopters and hundreds of Marines on board, is “on station in the Eastern Mediterranean” but “has received no specific tasking,” said the defense official, who spoke on condition of anonymity. US Navy deploys five warships, one amphibious ship to Mediterranean for Syria.

While the USS San Antonio has amphibious landing equipment, which can be used to land some 6,000 sailors and marines, “no boots on the ground,” however, remains the official motto.

So why then has the US deployed its most advanced amphibious landing ship? The reports suggest that this is routine and there are no attack plans:

“No amphibious landing is in the works, however, as President Barack Obama has ruled out any “boots on the ground” (Ibid)

From there on, the author goes into great detail as to the massive build-up of ships, their names, when deployed, and other war-making “instruments” of death.

Meanwhile reports confirm that France has dispatched its anti-air warfare frigate “Chevalier Paul” to the eastern Mediterranean. The French warship is joining the flotilla of US and British warships “including US navy destroyers and British and American submarines, which are armed with Tomahawk cruise missiles.” . . . .

Russian Warships to the Syrian Coastline

A critical situation is unfolding:

Moscow has announced that is also sending two warships to the Eastern Mediterranean to reinforce its naval strength which operates out of Russia’s naval base at the port of Tartus in Southern Syria. . . . .

The Russian built S-300 is functional. The deployment of the S-300 Surface to Air Missile system in Syria has been on the drawing board of the Russian Ministry of Defense since 2006. . . . . ..

I’m just about speechless at this point!