Tales from The Edge of a Revolution #3: The Goddess of Travel

The hotel shuttle pulls up to San Francisco’s airport half an hour late. I push a dollar into the driver’s hand and grab my bag. Less than an hour remains to negotiate San Francisco’s ever present chaos to make my flight. I join the line snaking back and forth through an infinite channel of nylon belts and down the backs of airline ticket booths, tapping my finger impatiently on the handle of my bag. There are no other flights to Albuquerque until late tonight and that would mean missing work.

I make it past the first ID screening and still the line crisscrosses for a mile in front of me. Then, the Goddess of Travel intercedes. Right in front of me, a TSA officer unclips the nylon belt holding us at bay and announces they are opening a new screening area. I thank the Goddess, and follow the woman beckoning with her hand. 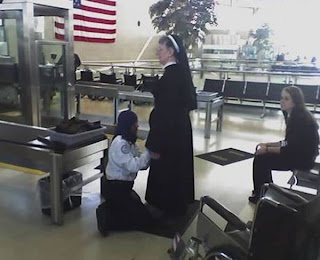 Like a pied piper she leads us past the rows of ticketing desks and into a lonely corridor. We walk forever and I wonder if I actually saved any time.

“Can we get to United’s gates from back here?” a man asks, mirroring my own growing unease as we travel well past the last ticketing booth.

“Yes, all gates from here,” our guide replies with confidence.

Finally, we round a bend in the deserted hall and stop. I suck my breath in and curse the Goddess of Travel.  That witch, she’s tricked me again. The Rape-U scans have finally come to San Francisco.

Nothing good has come from my experience in New Mexico. I’ve lived through weeks of immobilizing depression, like a rabbit trapped in the glare of headlights. I feel small, weak and ashamed. I sit at my computer and doggedly type, but no joy comes. What I produce is shit, and I am soon pounding the delete key. Mostly, I feel afraid. And that was the point, wasn’t it? To make me afraid to speak, to silence my voice.

I talk myself down. You don’t have to say anything this time. They won’t make you wait half an hour like they did in Albuquerque. They won’t treat you like a criminal…right away. They’ll let you get on the plane.

I take off my shoes and stop a passing TSA officer to tell him I wish to decline the scan, hoping they will get a female officer quickly.

“What? Decline? Well okay, but they’ll ask you to explain why.”

I cringe and reconsider. The last time I answered that question it led to my arrest and physical abuse by the police in Albuquerque. I can’t afford to miss this fight–the double shifts are killing me and I already had to tack on an extra one to pay the cost of my defense. God only knows what a San Francisco lawyer would charge for the same “Disorderly” defense. But I nod my understanding and continue to disassemble my belongings onto the conveyor belt.

At the scanner, I state my declination and I am moved off to the side. A female officer appears  immediately with a book.

“Why are you refusing to be scanned today?” she asks in a pleasant, friendly voice.

“I believe this to be an unconstitutional search.” I murmur, barely audible. You need the work, I tell myself, but I can’t escape the self-loathing that comes with my mousey behavior. Just get through this and get it behind you, I tell myself.

“This is not like the other scanners,” she tells me. The only argument against the scanners the TSA recognizes is the objection to safety. Since they are only protecting us against something that will occur to 1 in 25 million people, the machine has to be incredibly safe not to kill more people than a terrorist would. Unfortunately, I am not sure they can make that claim. The scanner’s risks are low, but it would take decades of very expensive research to actually establish that they are that low. I know the companies behind these products have not done this research. Other studies on radio frequency radiation do not indicate it is 100% safe. Still, that is not my issue.

“The scanner does not use radiation like the older ones. It is different,” she reassures me.

“Yes, I know.” She has made a mistake in the presentation. She was supposed to say it does not use X-ray radiation. This scanner does indeed use radiation, just not X-rays. “It uses radio-frequency or microwave,” I am speaking a little louder now, but still in a conversational tone. “That is not why I don’t want to go through it. I believe it is a gross violation of the Fourth Amendment.” I do not add that I resent my tax dollars being spent on a device that is unlikely to catch a single terrorist, being used by an agency that has never caught one–despite plenty of arrests, including mine.

“How does it violate the Fourth Amendment?”

My God, is she bating me? I stare at her, not knowing if I have the courage to go through this again. I lick my lips nervously. I need this job. I imagine calling the company after I’ve failed to show up and telling them I’ve been arrested. But what can I do? She is standing there, waiting for me to answer.  I can’t go forward until I give her a reason. Can they fault me for doing exactly that? Well, in New Mexico…

I fill my lungs and say, “The Fourth Amendment of the Constitution says:


The right of the people to be secure in their persons, houses, papers, and effects, against unreasonable searches and seizures, shall not be violated, and no Warrants shall issue, but upon probable cause, supported by Oath or affirmation, and particularly describing the place to be searched, and the persons or things to be seized.”

I brace myself for the aftermath. Two women, behind me in line, are now being escorted to the holding area–they have also declined the scan. I try to swallow in a dry mouth and search behind the TSA officer, waiting for their version of Guy in a Tie to show up.

“Okay.” She writes down my reason and closes her book. “Right this way please.”

I’m stunned. Nothing. No revocation of my airline ticket. No angry police. No cuffs. No bruises. No cowed call to my husband. Just a pat down. I step over the line and assume the position. 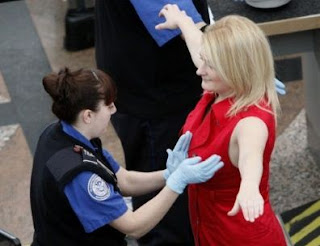 The officer tells me in excruciating detail what she is going to do and then does it at a quick and efficient pace. While she runs her hands down my legs, I look over. One of the women, who declined, is getting her frisking at the adjacent booth. She is a small Asian woman in her twenties with a hiker’s backpack and a decorative scarf around her neck. Quintessential San Francisco. She smiles at me.

I smile back and give the thumbs up sign.

When we are released, she walks over to me. “They didn’t give me nearly as hard a time as they gave you.”

“If they have too many people refusing, then more people realize they can refuse and it slows down the line. They probably just wanted to get us out of there, so people would go through the scanners.”

“Yeah, I didn’t know I could refuse until you did it.”

“Well, be careful. I did it in Albuquerque and when I recited the Fourth Amendment too loud they arrested me.”

Apparently, I’m the only one who never got the memo about New Mexico being a completely different country.

I board the plane and feel something I haven’t felt in weeks. A familiar tingling in the tips of my fingers, an itch I cannot scratch.  It builds to a driving carnal force: the need for sustenance, desire for a cold glass of water on a hot day, hunger for my husband’s warm embrace after I’ve been away.

I rip my computer from my backpack and lay my fingertips reverently on the keys. The words come immediate and without effort. I feel their force running through me. I am healed. I bless the Goddess of Travel.