Senator Mike Gravel has done it again. The one guy in all of Congress who had the balls to read out loud “The Pentagon Papers” into the public record (risking his life, when it was still classified, top-secret material), and began a chain of events that led to both the end of the Vietnam War, and also Richard Nixon’s self-destruction and Impeachment, is back in the public square. 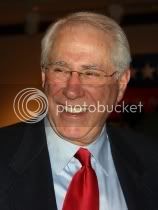 That’s right, not only is he back but Mike Gravel is the President of The United States, on a new TV show called: “I Like Mike“.  It is not yet known what station will carry it, or what time on TV it is going to be scheduled on TV, but there is already a very detailed Web Site setup about the show that describes a lot of information (you can even invest in the actual show) — see: I Like Mike TV — so I assume this is a real project that’s really going forward.

And there are also trailers for the show that have been produced that are now available:

“I Like Mike” Trailer No 1:  Mike Gravel is President!

“I Like Mike” Trailer No 2:  Mike Gravel is President!

“I Like Mike” Trailer No 3:  Mike Gravel is President!

I can’t wait to see this on TV. If anyone knows more about when it will be schedule, please post updates here. The show’s Web Site again is:  I Like Mike TV