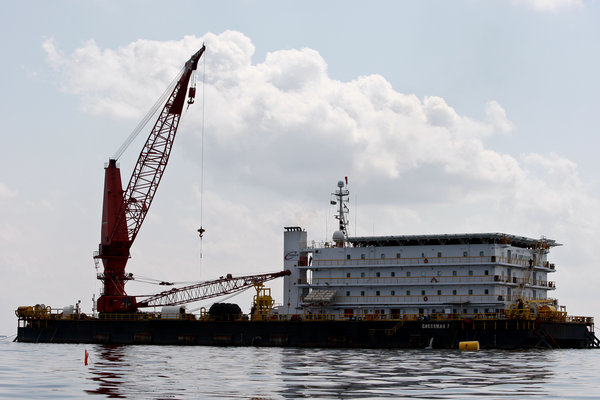 This is a “Flotel.”  It is a huge barge upon which pods, made of corrugated steel, are stacked two high and three wide.  Each pod holds 12 bunks.  There are 4 bunks to a “room” 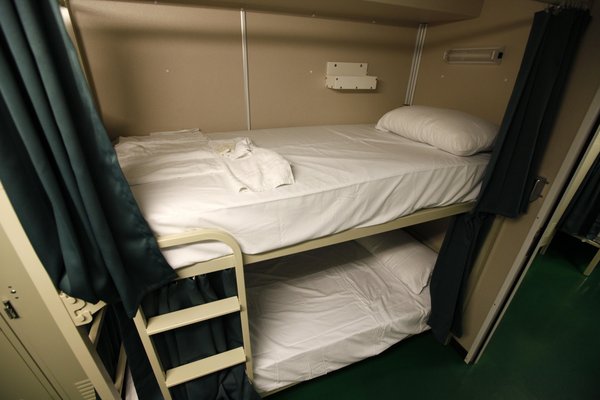 There is a common area for eating, showering and leisure activities.

The men working for BP, in helping with the clean-up, are expected to put in 12 hour days, for 18 days straight, and then, they are to receive 3 days off.  This means workers living in these “flotels” spend 24 hours a day there for 18 days straight.  And it means being away from their families for a long time at a stretch.

Although workers had been promised motels, BP brought in these flotels, because of, or so they say,

One of the logistical difficulties in combating the Gulf oil disaster has been finding housing for the thousands of workers brought in by BP and its contractors to work on cleanup and containment operations . . . .

Hundreds of fishermen learned July 20th that they were to go and live on these “flotels” and were very upset about the accommodations, the safety and even, possible disease.  They went on strike.

“We’re on strike, so we’re not going to work,” Jules Dag told WDSU, an NBC affiliate in New Orleans. “I’m not living on no quarterboat,” Dag said. “When I signed up, the agreement was we lived at a motel or somewhere they supplied us to live.”

Dag said that some workers have no choice but to accept lodging at a flotel because they’ve yet to be paid and have depleted whatever savings they had as a result.

“We ain’t been paid yet,” Dag said. “We’ve used almost everything we got to live out here already. Forty days, we ain’t seen nothing yet. What we supposed to do for money?“ (emphasis mine)

The quarters are very cramped, more like a prison cell and there is no privacy to speak of.  A lot of the workers had no choice but to go and live on a flotel because they had little or no money.

One worker compared the living conditions to jail, saying, “If I wanted to be in prison, I would break the law and go to jail.” Privacy is scant, typically limited to little more than a retractable curtain, with common areas for showers, eating and leisure activities. The flotels are powered by generators, with each pod holding 12 bunks. The close quarters made another worker concerned about disease.

Can you imagine living like that to help clean up BP’s criminal negligence disaster?  Can you imagine going without a paycheck for 40 days, working 12 hours each day?

A great many of these people helping in the clean-up are the very people, whose businesses/livelihoods and jobs BP has destroyed!!

And BP can just do whatever it wants — nothing to stop them. MF’s!!