Sniffing the atmospheres of alien worlds.

There are several things that most people don’t understand about humanity, traveling the universe, extrasolar planets and extraterrestrial civilizations.

Unfortunately, space based science fiction tends to amplify ideas and thought processes about life and the universe that are just not true or are vanishingly implausible.

One false idea, that I notice even intelligent progressive science educated people espousing, is that if and when we encounter an extraterrestrial civilization, it is likely to be like us, similar to us, and at a level of technology that is graspable by us.

To illustrate the truth, let me focus the gentle reader’s attention on an admittedly only somewhat accurate but illustrative graph below:

The bottom graph is the one of planet earth.  There is an assumption built in that microbial life has been around for the entire history of the planet, but it could be just as easily read as “no life / microbial life”.

What is important to note is, for our hypothetical planets 2 and 3, I put in small variances in planetary lifetime, versus when complex and technological life got started in each instance.  These are entirely reasonable numbers given the small variances by the possibilities inherent in the universe.

Planet 2 is a dead planet.  It is younger than Earth, and complex life got started earlier.  Similar to Earth, there was a technological civilization, but the planet was destroyed.  You will notice that its life was entirely gone before complex mulitcellular life ever got started on planet earth.

Planet 2 would have lived, gone through its life-bearing phase and died long before complex life ever got started on this planet.  Their civilization, too, lasted longer than ours – 100,000 years, but it is still just a smudge compared to the life of their planet.

Planet 3 is an older planet than Earth, but still alive.  They went through a multicellular stage 2 and very quickly developed intelligent life.  Some 600 million years later (far longer than it took us) they developed a technological civilization.  But because the age of the planet is older, this civilization is tens of millions of years more advanced than ours.

Though technology took far longer to start, the civilization of planet 3 would be so advanced that compared to them, we would be the equivalent of bugs, unworthy of notice.  Millions of years more advanced.  Whereas both our “intelligent” humanity and technological civilization, compared to the lifetime of the Earth, is a smudge so small you cannot even see it.

It is vanishingly unlikely given the small variations in the lifetimes of planets that we should ever encounter a civilization that is similar in technological level to us.  These planetary lifetimes are all well within the realm of possibility for life bearing planets.

In being generous, I applied the life of our “technological” civilization (meaning the use of things as complicated or more complicated than radios) at about 500 years.  This projects into the future somewhat, but estimates that we will destroy ourselves after 500 years (or at least, the future beyond that point is not projected).

But what you would see is that, should we encounter the beings of planet 3, they would have had things as complicated as radios MILLIONS OF YEARS before we did, with just small differences in when life on their planet got started, and how soon intelligent and technological civilization arose.

The graphs are also somewhat inaccurate in the sense of, were you to see them accurately, you would normalize them to the present day.  However, this graph inaccurate as it is should be sufficient to make my point.  If we were to encounter an extraterrestrial civilization, or its remains, the vast likelihood is that the civilization in question would have either been dead for millions, if not billions, of years, or that the civilization would still be alive and be millions, if not billions, of years, more advanced than ours.

Another false idea is that intelligent humans have evolved the ideal form for tool use and being intelligent and therefore that an extraterrestrial technological creature is likely to look like us, or similar to us.

Science fiction rewards this hypothesis.  But the truth is, we have four major limbs and two eyes and five fingers and toes because this is the body plan of our distant ancestors.

We evolved from a creature that looked distantly like this: 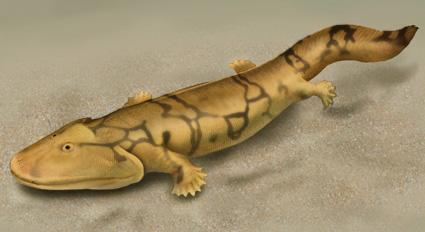 Were evolution were to have worked differently after this point, we might have two toes and two thumbs, and an extra finger or two, but we still would have looked substantially the same.  We might even have lizard like skin, or an eye in the back of our forehead, but, were we to encounter a creature so similar to us as to have that skin, or an extra eye, the first thing an informed scientist would do is to start looking for a common ancestry with us and the creature we as laypeople are likely to see as exceedingly strange.

What people who look at similar mammals know is that, yes, creatures as distantly related to us as dolphins and bats also have five fingers and toes, they just evolved to use them differently.  A bat’s wings have five fingers, but just with one of the fingers elongated and webbing spread between the fingers.  Were you to x-ray a dolphin, you would discover that the dolphin’s fin has 5 digits.

But even with eight fingers, we are still essentially tetrapods.  This is not because having four limbs and one head and a number of extra digits are ideal for tool use.  It is because we evolved from ancestors having one head, four limbs, a tail, and a number of digits.  We humans lost our tails, but the genome to have a tail is still a part of us, only it isn’t expressed in humans.

Therefore, it is an accident of evolution that we look as we do.  It is a matter of evolutionary history, by random chance favoring that body plan in the extremely distant past.

By random chance, extraterrestrials are unlikely to look like this, or even a variant of this having the same body plan.  Star Trek, Babylon 5, and all other similar science fiction therefore is hilarious.  They don’t have the standard alien being, for example, a wheeled creature with eight limbs, or sensory organs that can see microwaves as opposed to visible light.

One important spiritual aspect of this is how closely we are related to all other life on planet earth.

Another facet of science fiction that, given recent technological advances, we are likely to have wrong is, we explore the universe, only knowing about habitable planets once we get there.

Ladies and gentlemen, I present to you the Optical Vortex Coronograph.

This is astonishing technology, and is here now.  The future will not be like Star Trek, because the technology is already here to sniff the atmospheres of alien worlds.

By the philosophical implications alone, this is likely to go down in history as the most important invention of the early years of the 21st century.

Yes, we have the technology to seek and find alien planets that look like our own.

And the thing is, once you can see an extraterrestrial planet, you can know many important things about it.  Once you can see, the possibilities that are derivable are the following:

1.  You can know the orbital period of said planet — the length of its year, and the average temperature of its upper atmosphere.

2.  You can know the presence of constituents of the planetary atmosphere.  You can know how much oxygen there is, how much carbon dioxide, and everything else.  This is a basic feature of the long existing science of spectroscopy.

3.  By knowing the size of the planet, and the length of its year, you can get a pretty good idea of the mass of a planet, and therefore, its surface gravity.  You can also, pretty much determine the number of moons, and by variations in albedo, the amount of land to liquid such a planet has.

We will know many important things about a second home before we go there.  Or, at least, enough to ensure to ourselves that before we embark on our extraterrestrial voyage, whether such a planet would be at least physically friendly to us (in terms of purely physical conditions) at the time we left to go there.

Unlike science fiction, we will not be journeying around in the dark, stumbling upon planetary systems, then finding out once we get there whether the conditions are habitable.  The technology is already here for us to know before we ever leave.

So, think about this with me, for a second.  As I said above, we are a primitive, barely conscious civilization by the standards of any possible intelligent extraterrestrials we might meet.

If we can do this — image extraterrestrial planets before we ever leave our home systems, surely beings millions of years more advanced than us can do this already.

They do not have to be here.  They can know everything about us from where they already are.

This is why, for one reason, I dispute Stephen Hawking’s belief that we should be careful, lest we loose the wrath of a hostile extraterrestrial civilization upon us, who will, if we advertise ourselves to the universe, will arrive and subjugate or kill us.

Here is what I would say to Stephen Hawking:

2.  If they are advanced enough to be a threat to us, they already know everything there is to know about us, without even coming here.

3.  At an early 21st century of technology, we have the Vortex Coronograph.  Imagine what an extraterrestrial civilization might have in terms of remote sensing being a MILLION YEARS more advanced than us.

We will be able to see extraterrestrial planets, and learn much about them, very soon, in the lifetime of civilizations, without ever leaving home.  And if we leave home and go somewhere else, “lightspeed” will not be possible — it will take us thousands of years to get there (possibly the subject of another essay).  But what is a thousand years, or ten thousand, in the life of the galaxy?