We Must Fill the Void Ourselves 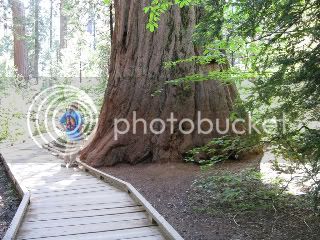 The California state budget crisis lead to a sharp funding reduction for the State Park system — a proposed total of more than $143 million from a budget already operating on a shoestring. One hundred or more California State Parks are expected to close after Labor Day weekend, and the list of parks on the chopping block has not yet been announced.

Today I want to share one of my favorite places threatened by the budget crisis — that is Calaveras Big Trees State Park. It contains a stand of Giant Sequoia, the rare and famous Sierra Redwood, and holds a telling history about our approach to the natural world. The Sequoia are the biggest living creatures on the earth today, and some of the trees in these small groves are more than 3000 years old.

Europeans began settling in California’s Goldrush Territory around 1850, and they first found the Giant Sequoia in 1852. Their instinct was to try and communicate just how big these trees were to the people back east by making a spectacle — so they cut down the first of the big trees they found and shipped a cross section of the stump back to the colonies to impress their friends.

To the right is a photo of the remains this first prank left behind — a stump now known as The Discovery Tree. To give you perspective, the guy wearing the peace sign shirt is 5’10” and weighs 185 pounds. This tree stump once supported a bar and was even used as a dance floor for a time.

Killing this ancient tree didn’t favorably impress the folks back east, though. Many were horrified at killing such a stately creature and treating it like a circus act. Rather than draw positive attention to the Goldrush Territory, cutting The Discovery Tree disgusted people. But those who were interested in attracting miners to the area — in particular the increasingly powerful water company — didn’t give up so easily. They wanted to spread the word that California was a land of mystery, riches, and great surprises.

The next tree was killed for exhibit at the 1889 World’s Fair in Paris. This time, they scraped the bark off of one of the larger trees in the north grove and reassembled the shell as an exhibition to attract the people in Europe to California.

Again the exhibition created more horror than intrigue — the people at the World’s Fair couldn’t get past the violence that had been perpetrated against this beautiful tree, and thought the exhibition was barbaric. This was a tree that might have weighed 4000 tons and stood as tall as the Statue of Liberty. To the left you will see a photo of the excoriated trunk. The burn scars you see on it were from a forest fire in 1908. But the trunk stands, dead, in the middle of the North Grove at Calaveras Big Trees, and is commonly called Grandmother of the Forest. She stands as a testimony to all who see her — and the deeply traumatizing presence of her carcass was a leading factor toward obtaining protection for the Calaveras Sequoia in 1933.

It is a rare creature that can evoke such sympathy from people who might otherwise overlook the impact their actions have on nature. It speaks to the wonder of these trees that the people of 1850’s New York were appalled at the killing of The Discovery Tree, and the people in Paris — who were otherwise celebrating the 100th anniversary of the French Revolution — were horrified at killing The Grandmother of the Forest as well.

Emapthy was always in short supply amongst those who had interest in drawing miners to California. There was one last tree that was wounded and nearly killed in the North Grove. This time they cut a tunnel through the tree and photographed a car full of people driving through it. This is known as the Log Cabin Tree, because the volume of space they tunneled out of the middle was as big as a settler’s entire living quarters.

Although much of this tree perished as a result of the tunnel, there is still a section that remains alive today. And there are many beautiful Giant Sequoias that stand at Calaveras Big Trees — trees that take many hundreds of years to grow to “adulthood” and stands that take many thousands of years to develop. In spite of their age and mighty size, they are fragile — and can grow only in stable ground in temperate climates. They need a stretch of land that can be still for a few thousand years without a landslide or major earthquake. That is why there are so few places that these trees can thrive.

There are very few Giant Sequoia stands in the world. A few stands exist in Kings Canyon and Sequoia National Parks, but I believe the two groves at Calaveras Big Trees State Park are the only others. When you meet one of these great trees, you will understand how the people of 1850’s New York and 1898 Paris were immediately drawn to empathy at the sight of their destruction.

I wonder if Governor Schwarzenegger or the members of the California Legislature ever met one.

California is rich with precious natural gems like these Sequoia, and the State Park system needs help. They need help from volunteers, activists, conservation organizations — both inside and outside the state. Here are some things that you can do — some without leaving your computer:

The California State Parks Foundation put forth a cogent argument why closing the State Parks will not save money for California. Write letters accordingly.

Non-residents can sign this petition for people who do not live in California.

Crossposted from GreenRoots at orange.