The Bestest of All Possible …

Why forever and ever?  Because we’re losing, not winning.

Says who, you might ask?  Some hand-wringing “liberal”?    No, none other than General Stanley McChrystal, the warmongering, warcriminal in charge of the whole mess for the Americans.


The top American commander in Afghanistan declared that the Taliban are winning in Afghanistan in a startling interview published Monday – a striking contrast to the “Mission Accomplished” rhetoric of the Bush Administration as regards Iraq.

His remarks appear carefully tailored to lower expectations and shift public opinion in support of operations in the war-torn country where few foreign powers have ever seen victory. The Taliban ruled Afghanistan from 1996 to 2001, when they were routed by a US invasion.

Currently, US operations in Afghanistan cost taxpayers about $4 billion a month. That comes to roughly $133 million per day, or $5.5 million per hour.

Yeah, but we can’t afford anything here.  California is broke, prisons are melting down as prisoners riot for hours on end, schools are firing teachers, the entire social safety net is being set afire ….. why, so we spend money instead losing in Afghanistan?

Of course this begs the question:  why would the top General there actually admit to losing the war?  Well of course because we’re not spending enough money there yet.  And we’re not killing enough American troops!   So we need more American troops to sacrifice to the volcano gods of war:


McChrystal’s interview also appeared designed to augment support for increasing troop levels in parts of Afghanistan. Since President Barack Obama took office, the Pentagon has increased the number of US troops in the country. The strategy described suggests a “hearts and minds” approach which favors securing civilian areas rather than focusing on full-frontal engagement with militants.

The interview also quotes unnamed US officials arguing for a further increase in US troops.

Now to win an unwinnable war?   Spend more money.   Kill more boys.  Sure.  That works every time.  These people learn nothing from history.   Their egos are so huge they think they cannot lose, and the only reason they are losing is because those jerks in Washington aren’t giving them what they need!   Goddamn those jerks in Washington!   They’re not there man, they don’t know what it’s like!

Well, here’s what it’s like for some of the Afghani people we’re spending $5 million bucks an hour killing: 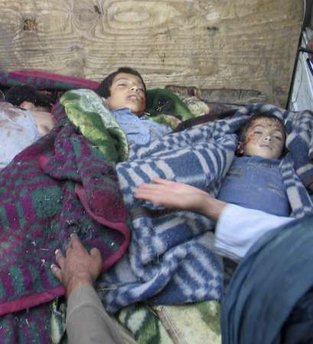 Killing children doesn’t come cheap.  Hell, you can’t do it here without getting in serious trouble!   But in Afghanistan, you can use the highest tech weaponry in the history of mankind to kill children and it’s just A-OK and the government will keep giving you more!

I love this country!


General Sir David Richards, who becomes Chief of the General Staff on August 28, said: “The Army’s role will evolve, but the whole process might take as long as 30 to 40 years.”

And that’s being optimistic, no doubt.   The Soviet Union was bankrupted by their involvement in Afghanistan and it took a lot less than 40 years to do so.

Meanwhile, my own union healthcare, which is some of the best you can get in this country, just doubled its prices for co-pays on drugs, and for name brands, they quandrupled.    Next year the hours needed to qualify for the health care goes up 35%.   But we gotta kill those babies in Afghanistan …..

The audacity of hope indeed.  It certainly was audacious.    Stupidly so.