CIA pressued Britain to cover up its use of torture 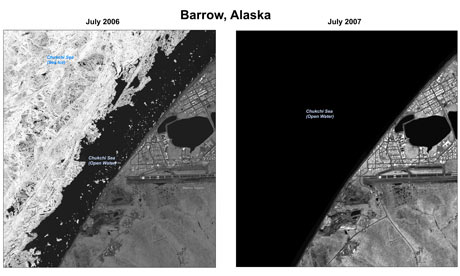 Graphic images that reveal the devastating impact of global warming in the Arctic have been released by the US military. The photographs, taken by spy satellites over the past decade, confirm that in recent years vast areas in high latitudes have lost their ice cover in summer months.

The pictures, kept secret by Washington during the presidency of George W Bush, were declassified by the White House last week. President Barack Obama is currently trying to galvanise Congress and the American public to take action to halt catastrophic climate change caused by rising levels of carbon dioxide in the atmosphere.

One particularly striking set of images – selected from the 1,000 photographs released – includes views of the Alaskan port of Barrow. One, taken in July 2006, shows sea ice still nestling close to the shore. A second image shows that by the following July the coastal waters were entirely ice-free.

The photographs demonstrate starkly how global warming is changing the Arctic. More than a million square kilometres of sea ice – a record loss – were missing in the summer of 2007 compared with the previous year.

Nor has this loss shown any sign of recovery. Ice cover for 2008 was almost as bad as for 2007, and this year levels look equally sparse.

“These are one-metre resolution images, which give you a big picture of the summertime Arctic,” said Thorsten Markus of Nasa’s Goddard Space Flight Centre.

Barrow, Alaska is on the Arctic Ocean, about as far north as it is possible to get in Alaska.

IOW, Barrow is the northernmost town in North America.

There has always been summer ice there… but no more.