The Ailments that put you on the Insurer’s Drop List 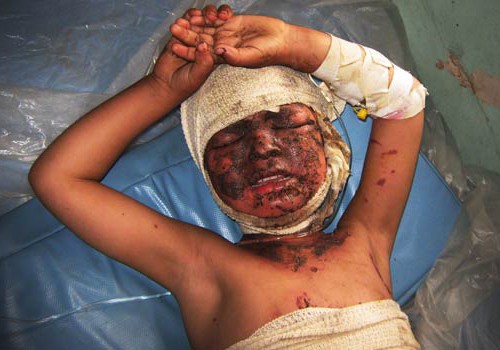 Barack Obama bombed this baby.  This baby is one of the lucky ones, seeing as how it’s not dead.

Why did Obama maim this baby, when General Petraus has told us that there are ‘No more Al Queda in Afghanistan’?

I guess we just like to bomb babies for the sheer rollicking hell of it.   Gotta use all those weapons we bought for something.  You know, so we can order more, and keep the economy moving.  Keep the Corporate Welfare money going out to Raytheon and the other War Profiteers, no?

I’m becoming a huge fan of Jeremy Scahill.  The man speaks truth to power better than anyone I’ve seen in a good long time.


Seeing some of these people online turning their profile pictures green “for Iran” makes me want to create a Facebook and Twitter application that turns profile pictures blood red, in solidarity with all of the Afghans and Iraqis and Pakistanis being killed by US wars today; wars that people in the US failed to stop and whose representatives continue to fund to the tune of $100s of billions.-Jeremy Scahill

Here is Scahill in an interview:


What people, I think, misunderstand about Barack Obama is that this is a man who is a brilliant supporter of empire–who has figured out a way to essentially trick a lot of people into believing they’re supporting radical change, when in effect what they’re doing is supporting a radical expansion of the U.S. empire.

What we see with Obama’s policies in Iraq, Afghanistan and the broader Arab and Muslim world, as well as his global economic policies, are a continuation of the most devastating and violent policies of the Bush administration–while placing a face on it that makes it easier to expand the iron fist of U.S. militarism and the hidden hand of the free market in a way that Republicans, I think, would have been unable to do at this point in history.

That, in so many words, is why Barack Obama is President.

Scahill has a blog, here:

Gotta love this one:


The cowardly Democrats who checked their spines at the door to Congress when they voted Tuesday try to defend their flip-flop on war funding. Frankly, it is embarrassing.

Not many people thus far have figured things out to this degree.  Scahill is way ahead of the curve.

For instance, how many people actually know that Obama has killed 687 human being inside the borders of Pakistan since he took office?  687 dead people, that’s more than any serial killer I can think of:


Obama’s Undeclared War Against Pakistan Continues, Despite His Attempt to Downplay It

Three days after his inauguration, on January 23, 2009, President Barack Obama ordered US predator drones to attack sites inside of Pakistan, reportedly killing 15 people. It was the first documented attack ordered by the new US Commander in Chief inside of Pakistan. Since that first Obama-authorized attack, the US has regularly bombed Pakistan, killing scores of civilians. The New York Times reported that the attacks were clear evidence Obama “is continuing, and in some cases extending, Bush administration policy.” In the first 99 days of 2009, more than 150 people were reportedly killed in these drone attacks. The most recent documented attack was reportedly last Thursday in Waziristan. Since 2006, the US drone strikes have killed 687 people (as of April). That amounts to about 38 deaths a month just from drone attacks.


Jeremy Scahill is the author of the international best-seller Blackwater: The Rise of the World’s Most Powerful Mercenary Army. He is a frequent contributor to The Nation magazine and a correspondent for the national radio and TV program Democracy Now! He is currently a Puffin Foundation Writing Fellow at The Nation Institute. Scahill has won numerous awards for his reporting, including the prestigious George Polk Award, which he won twice. While a correspondent for Democracy Now!, Scahill reported extensively from Iraq through both the Clinton and Bush administrations.

Traveling around the hurricane zone in the wake of Katrina, Scahill exposed the presence of Blackwater forces in New Orleans and his reporting sparked a Congressional inquiry and an internal Department of Homeland Security investigation. He has appeared on ABC World News, CBS Evening News, NBC Nightly News, CNN, MSNBC, PBS’s The NewsHour, Bill Moyers Journal and is a frequent guest on other radio and TV programs nationwide. Scahill also served as an election correspondent for HBO’s Real Time with Bill Maher. He lives in Brooklyn, New York.

I have no affiliation.  I am only a fan of the guy.