Torture Prosecution by Whom the ICC

But what is ultimately even more amazing is the claim that suppressing these photographs is necessary to prevent an inflammation of anti-American sentiment in the Muslim world generally and Afghanistan specifically.  That claim is coming from the same people who are doing this: 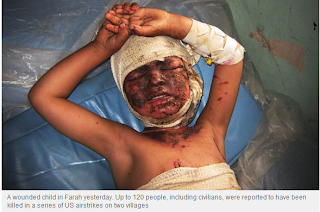 Up to 100 civilians, including women and children, are reported to have been killed in Afghanistan in potentially the single deadliest US airstrike since 2001. The news overshadowed a crucial first summit between the Afghan President and Barack Obama in Washington yesterday. . . .

We’re currently occupying two Muslim countries.  We’re killing civilians regularly (as usual) — with airplanes and unmanned sky robots.  We’re imprisoning tens of thousands of Muslims with no trial, for years.  Our government continues to insist that it has the power to abduct people — virtually all Muslim — ship them to Bagram, put them in cages, and keep them there indefinitely with no charges of any kind.  We’re denying our torture victims any ability to obtain justice for what was done to them by insisting that the way we tortured them is a “state secret” and that we need to “look to the future.”  We provide Israel with the arms and money used to do things like devastate Gaza.  Independent of whether any or all of these policies are justifiable, the extent to which those actions “inflame anti-American sentiment” is impossible to overstate.

And now, the very same people who are doing all of that are claiming that they must suppress evidence of our government’s abuse of detainees because to allow the evidence to be seen would “inflame anti-American sentiment.”  It’s not hard to believe that releasing the photos would do so to some extent — people generally consider it a bad thing to torture and brutally abuse helpless detainees — but compared to everything else we’re doing, the notion that releasing or concealing these photos would make an appreciable difference in terms of how we’re perceived in the Muslim world is laughable on its face.

Moreover, isn’t it rather obvious that Obama’s decision to hide this evidence — certain to be a prominent news story in the Muslim world, and justifiably so — will itself inflame anti-American sentiment?  It’s not exactly a compelling advertisement for the virtues of transparency, honesty and open government.  What do you think the impact is when we announce to the world:  “What we did is so heinous that we’re going to suppress the evidence?”  Some Americans might be grateful to Obama for hiding evidence of what we did to detainees, but that is unlikely to be the reaction of people around the world.