Hours in the Saddle-Spiritual Renovations

If War Is Hell

What does that make the Bushes? 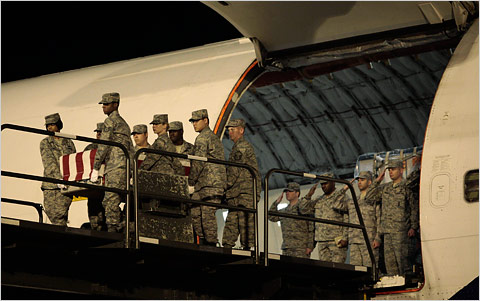 Photo by Brendan Smialowski for The New York Times

For the first time in 18 years, the Pentagon granted the press access on Sunday night to cover the arrival of a coffin to Dover Air Force Base from overseas.

The coffin, draped in a flag and bearing the body of Air Force Staff Sgt. Philip Myers of Hopewell, Va, was unloaded from a government aircraft by the military honor guard. The 30-year-old Mr. Myers was killed by an improvised explosive device near Helmand Province in Afghanistan on April 4, according to the Defense Department.

A ban on news coverage of returning war dead, which had been in place since the Persian Gulf War in 1991, was lifted by the Obama administration following a review of the policy by Defense Secretary Robert Gates.